This Day in History: April 9th 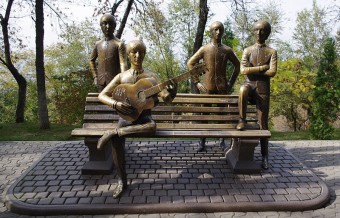 Paul McCartney’s announcement on April 9, 1970 that he would no longer be recording or performing with the Beatles was disheartening, but hardly surprising. Unable to agree on what direction the band should take, the four musicians had been pouring their creativity into solo projects. There were also arguments over who should manage the group’s business affairs – Allen Klein or Paul’s brand new father-in-law Lee Eastman.

In March of 1970, the you-know-what really hit the fan. There was a glut of Beatles-related music slated to hit the shelves in April. The Beatles album “Let It Be” was set for release, as was Ringo’s solo album “Sentimental Journey.” Paul also hoped to release his first solo effort, “McCartney,” on April 17th.

Allen Klein, who was handling the Beatles’ affairs at the time, asked EMI Records, with John, George and Ringo’s permission, to delay the release of “McCartney” to avoid flooding the market and possibly hurting everyone’s sales. A week later, John and George wrote Paul a letter explaining to him why they wanted EMI to push back the release date of his album, telling him:

We thought a lot about yours and the Beatles LPs – and decided it’s stupid for Apple to put out two big albums within seven days of each other. … We’re sorry it turned out like this – it’s nothing personal.

When Ringo hand-delivered the letter to Paul’s house, Paul freaked out so badly that Ringo convinced John and George to postpone the release of “Let It Be” instead of asking Paul to push his release date back, as it obviously meant so much to him.

When “McCartney” was released, the first promotional copies contained a press release that put one of the final nails in the Beatles coffin. Long believed to be a manipulative self-interview to jab at the other Fabs, both Paul and Peter Brown, a long-time friend and personal assistant to the band, claimed the questions were composed by Brown and answered by McCartney. In any case, the interview left no gray area where the future of the Beatles was concerned:

Q: “Is it true that neither Allen Klein nor ABKCO have been nor will be in any way involved with the production, manufacturing, distribution or promotion of this new album?”

Q: “Did you miss the other Beatles and George Martin? Was there a moment when you thought, ‘I wish Ringo were here for this break?’”

Q: “Are you planning a new album or single with the Beatles?”

Q: “Is your break with the Beatles temporary or permanent, due to personal differences or musical ones?”

Q: “Do you foresee a time when Lennon-McCartney becomes an active songwriting partnership again?”

John Lennon was furious at Paul’s announcement, as he had already told Allen Klein in September of 1969 he intended to leave the Beatles. Klein persuaded Lennon to keep his plans under wraps because he was negotiating a new deal with EMI. When the band got together in London to sign the contracts, Lennon made his intentions known to McCartney as well. John told Jann Wenner from “Rolling Stone” in 1970:

“… It came to a point that I had to say something. So I said, ‘The group’s over, I’m leaving.’ Allen was there, and he was saying, ‘Don’t tell.’ He didn’t want me to tell Paul even. But I couldn’t help it, I couldn’t stop it, it came out. And Paul and Allen said they were glad that I wasn’t going to announce it, like I was going to make an event out of it. I don’t know whether Paul said, ‘Don’t tell anybody,’ but he was damn pleased that I wasn’t. He said, ‘Oh well, that means nothing really happened if you’re not going to say anything.’ So that’s what happened.”

So John was mad that Paul beat him to it, and Paul knew he would be in John’s estimation.

McCartney seemed a bit taken aback by the public backlash in the days following his announcement. Accustomed to being adored and worshiped, people blamed him for breaking up the Greatest Band of All Time, and he wasn’t prepared for the consequences. He defended his actions by pointing out:

“I didn’t leave the Beatles,” he said. “The Beatles have left the Beatles. But no-one wanted to be the one to say the party’s over.”