This Day in History: April 10th 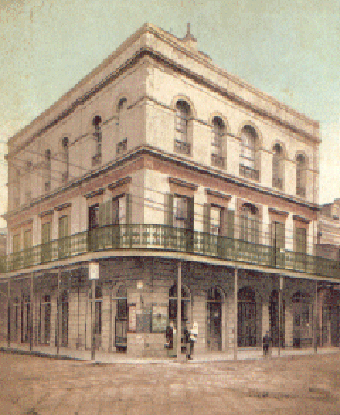 On the evening on April 10, 1834, a fire broke out in an elegant three-story mansion in New Orleans’ French Quarter. The rescuers found a slave woman chained in the kitchen, who admitted to deliberately setting the blaze. She felt it was worth the risk of dying in a fire to escape further torture by Madame LaLaurie, the lady of the house. After the authorities released her, she led them to the attic, where they were met with a sight that made them all recoil with disbelief and terror.

The mistreatment of slaves was not a matter for concern during the 1830’s in New Orleans, especially for wealthy, socially prominent ladies like Delphine LaLaurie, but even among the elite there were boundaries. When a furious, whip-wielding Delphine chased a young slave girl over the edge of the roof causing her to fall to her death in 1833, she crossed them.

She tried to hide the “evidence,” but the police soon discovered the little girl’s body thrown down a well. (As punishment Madame LaLaurie was ordered to sell her other slaves, but she got around this by selling them to family members, who quietly sold them back to her.)

When the firefighters burst into the attic, they were greeted by the sight of slaves chained to walls and makeshift operating tables. Some were crammed into tiny cages. Most were dead, but some were still alive. All had been tortured unimaginably. Entrails ripped out, mouths sewn shut, eyes poked out, hands sewn to different parts of the body, private parts cut off… Body part and human heads were strewn around the attic and piled up on shelves.

The rescue workers ran out in horror, and sent doctors to tend the few victims that still lived. Word spread through the city very quickly telling of the horrific events unfolding at the LaLaurie Mansion. An angry mob gathered outside, crying for justice and brandishing nooses.

At this point, a carriage violently crashed through the gates at breakneck speed and disappeared in a cloud of dust. Madame LaLaurie and her family left New Orleans for good. Most believed that they settled in Paris. No formal charges were ever filed, but her reputation was destroyed… the poor thing.

Not surprisingly, considering the house’s history and location, it has a reputation for being haunted. It was the scene of another strange death in 1892, when an eccentric member of an old New Orleans family named Jules Vignie died at LaLaurie Mansion in deplorable conditions, although he was surrounded by valuable antiques and many thousands of dollars. After his death, there were rumors of lost treasure hidden in the house, but no-one dared to actually search for it.

In recent years, the house underwent a massive remodel, and the new owners found a graveyard in the back end of the house hidden beneath the wooden flooring, which they believe was Madame LaLaurie’s private graveyard. The remains had been dumped hastily in the ground, and when examined, they were found to be from the same time period. This would explain how some of her slaves seemed to disappear into thin air, and could never be accounted for.