March 4, 2014 Matt Blitz
Martin A. asks: Where did the expression “nothing to sneeze at” come from?  For that matter, why is sneezing called sneezing?  Thanks! 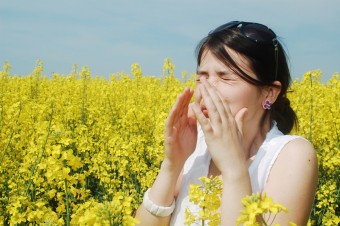 As with so many etymologies, it’s difficult to definitively say exactly where the word ‘sneeze’ comes from, but it is generally thought that it started with the Indo-European word ‘penu’ – to breath. Eventually, this evolved into the Old High German word ‘fnehan,’ also defined as to breathe. Combining that with the the Old Norse word ‘fnyse,’ which meant to snort, brings us to the 1000 CE (also known as the ‘High Middle Ages’) and what we call “Old English.”

The resulting Old English word ‘fnēosan’ soon became ‘fnesan,’ meaning to snort, sneeze. Within a few hundred years, the leading ‘f’ was dropped and it became simply ‘nesan.’ By the late 14th century, the verb of the word became ‘nesing.’ By the middle of the 17th century, an ‘s’ was tacked on, among other slight modifications, and it became what we know it as today – ‘sneezing.’

The first known instance of this version of the word appeared in 1646 in Sir Thomas Browne’s “Pseudodoxia Epidemica,” a work refuting superstitions and common errors of the day. In it, Chapter IX, titled “Of Sneezing,” begins:

CONCERNING Sternutation or Sneezing, and the custom of saluting or blessing upon that motion, it is pretended, and generally believed to derive its original from a disease, wherein Sternutation proved mortal, and such as Sneezed, died….

The colloquial idiom “nothing to sneeze at” first made an appearance in the late 17th and early 18th century, but has its roots a little earlier than that with the craze of snuff boxes, which as you might expect resulted in an awful lot of sneezing.

A pinch of snuff sniffed into the nostrils could produce a sneeze on call and developed into something people did in the middle of a conversation as a sign of disrespect to the speaker or what was being said. Sneezing could also be used as something of a status symbol, showing you were perhaps above the person and anything they had to say. So if someone said something that you disapproved of or found beneath you or boring, you could show your pretentious disregard by getting out your snuff box and sneezing.

This was exemplified in published form in the popular (at the time) 1806 novel written by Thomas Skinner Surr “A Winter in London,”

“A word in your ear,” said his lordship: “Do you know, I have quite changed my mind about that business since I met the marquis. He tells me that it’s a sort of thing a young fellow of my expectations ought to sneeze at.

As for the negative form of the saying, “not to be sneezed at,” it first appeared a few years earlier, in 1799, in a play called “Fortune’s Frolic” written by John Till Allingham:

So, next time you are in a conversation that bores you, one option is to have a box full of snuff in your possession. Nothing shows status and disrespect quite like a good old fashioned snuff induced sneeze.  Or, I guess you could simply whip out the latest iPhone and check Facebook while someone is trying to talk to you in person, but the snuff box / sneeze version- perhaps combined with wearing a top hat and a monocle- has the virtue of exhibiting a little more panache in your rudeness.  😉