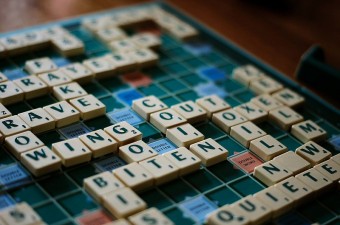 There aren’t a great number of positive things that can be attributed to the Great Depression. However, Scrabble is a game that probably wouldn’t have existed without it.  It all began with an unemployed architect by the name of Alfred Mosher Butts of Poughkeepsie, New York. Thanks to his excessive free time while unemployed, he decided to invent a word game that was inspired by anagrams and crossword puzzles.

(Incidentally, Leo Fender of Fender guitar fame was also out of work thanks to the Great Depression when he decided to start his own company, Fender Radio and Record Shop. He was previously an accountant.  Despite going on to be famous for his guitars, Fender never learned to play the guitar, hiring musicians to test out his designs instead.)

In any event, Butts’ decision to go with a word game was partially from previous study he’d done into popular games.  In his 1931 paper, aptly titled “Study of Games,” he noted that nearly all popular games of the day were either strategy “move-based” games, number games, or letter games, with the former two being most popular.  He felt that the third category had quite a bit of untapped potential. A few years later, he put the finishing touches on the prototype of his own letter-based game.

Butts originally called his game ‘LEXICO’ and it didn’t require a board to play, simply comprising of small cardboard squares with letters on them; otherwise the game was very similar to the modern version. The letters even had their signature point values. He determined these values by performing a frequency analysis on the alphabet from sources such as the New York Times. In order to combat the lazy use of plurals, he only included four ‘S’ tiles.

By 1938, Butts changed the name to Criss-Crosswords and had added a 15×15 board. Although he personally developed multiple sets in attempt to sell them to large game manufacturers, he was unsuccessful in this venture.

An entire decade passed before Butt’s game began getting any kind of recognition. Things changed when a Connecticut man by the name of James Brunot happened to have a copy of Criss-Crosswords and believed that it could be commercially successful. He subsequently bought the manufacturing rights from Butts, on the condition that the latter would get royalties on every copy sold.

Once he owned the rights, Brunot decided to tweak things somewhat, such as shifting the starting point to the middle, instead of the top left corner, and renaming the game Scrabble, which means “an act of scratching or scrambling for something” (from the Dutch “schrabbelan”).  He also re-designed the board slightly, including coming up with the now familiar colour scheme.

After perfecting the game, Brunot and his wife setup shop in an abandoned schoolhouse in Dodgingtown, Connecticut.  Despite Brunot’s enthusiasm, only a couple of thousand units were sold during Scrabble’s first year of production. After expenses, this actually resulted in a net loss of $450 that year (about $4,200 today).

Business remained slow until a couple years later when Macy’s president, Jack Strauss, played the game while on vacation in 1952. Upon his return, he was shocked that his store didn’t sell the game and proceeded to place a large order. Apparently his hunch about the game was correct, because within twelve months it was the ‘must have’ game for most American households.

Thanks to the huge surge in orders, Brunot could no longer keep up with the demand, so licensed the rights to game maker Selchow and Righter.  Two years later,  sales of the game had risen to over four million sets sold.  Not bad for a game that Selchow and Righter had previously rejected back when Butts was the owner, as did Milton Bradley and Parker Brothers.

While you’ll often read that Butts ultimately did not receive anything for the game he invented, this isn’t true at all.  By the time Brunot sold the trademark rights to Selchow and Righter (rather than just licensing the game to them) in 1971, Butts’ had received about $265,000 in royalties (approximately $2 million today).  Brunot fared better walking away from the whole thing with about $1.5 million (about $11.5 million today).

The game was still going strong thirty years after its big boom when Selchow and Righter was sold to Coleco. Unfortunately, the latter company went bankrupt shortly afterwards, but Scrabble was quickly snatched up by Hasbro and later the international rights were acquired by Mattel for $90 million.

Today, Scrabble seems to be as popular as ever. Besides its online and otherwise digital popularity, it is estimated that roughly one third of US households contain a physical copy of the game, as well as a little over half of all households in Great Britain. To date, over a hundred and fifty million sets have been sold worldwide, making it one of the most popular board games of all time.