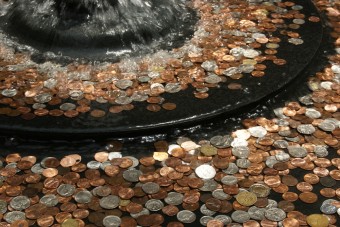 Today I found out why we throw coins into fountains and how the tradition got started.

People have been throwing coins into fountains seemingly as long as there have been coins and fountains. The tradition all started with water. Water, of course, is vital to sustain human life. While many people in the developed world today have clean, drinkable water readily available from their kitchen taps, this was not always the case. Potable drinking holes in many regions weren’t the easiest things to find. Thus, where clean water was available, many early European tribes believed that such areas were a gift from the gods.

As you probably already know, presenting gifts to gods is an ancient practice that was usually meant to appease angry gods, or to act as a payment for a request or prayer. In the case of fountains and wells, people would toss in a coin while sending up a prayer—an early version of making a wish.

One rather prolific well can be found in Northumberland, England, and was used to pray to the Celtic goddess of wells and springs, Coventina. 16,000 coins from different eras of the Roman Empire were found there.  Interestingly, most of the coins found in the Coventina Fountain were low denominations, much like today where people are usually more willing to part with a 5 or 10 cent coin rather than a full dollar, euro, or pound.

Of course, it wasn’t always coins. The Well of Pen Rhys in Oxford, England called for pieces of clothing to be tossed in. In this case, it was thought that the water had healing powers and that the clothing carried disease, so by tossing a button, pin, or piece of fabric into the well, you would be healed. The belief in the healing powers of the Well of Pen Rhys remained popular well into the 18th century.

These days, believing in gods watching over the wells or the thought that water has healing powers has largely lost favour, but people still practice this ancient tradition, in modern times usually making a wish.

Probably one of the most famous examples of a wishing fountain is the Trevi Fountain in Rome. The Trevi Fountain was built as the ending point of a 21 kilometre long aqueduct called Virgo, named for the goddess who would guide soldiers to water when they were thirsty and tired. Originally, tossing a coin in or taking a drink from the fountain was supposed to ensure good health. Eventually, the tradition evolved to what we know today: if you toss a coin over your shoulder into the fountain, you will one day return to Rome.

This idea was popularized in the 1954 film Three Coins in the Fountain, which also suggested that if you throw two coins in, you’ll fall in love with a Roman, and if you throw three coins in, you’ll marry him or her. Since the movie, this practice has become so popular with tourists that it’s estimated that around €3,000 in coins are thrown in the fountain every day.

Obviously, all of those coins can’t just sit in the fountain forever. The Trevi Fountain shuts down for one hour every day and the coins are swept out by the Roman Catholic charity Caritas, which pays for food for the poor as well as Aids shelters. The coins have to be cleaned, sorted into different denominations, and sent off to the bank.