This Day in History: March 28th 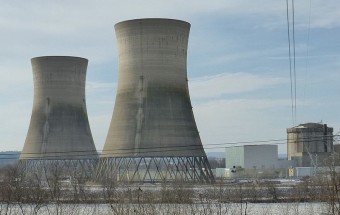 At 4 a.m. on the morning of March 28, 1979, a combination of human and mechanical error led to the worst nuclear accident in U.S. history, that in truth wasn’t all that bad. It happened at the Three Mile Island nuclear power plant just outside Harrisburg, PA, and would drastically escalate public distrust toward nuclear power literally overnight.

If you were around ten miles away from the reactor during the accident, you’d have received about 8 millirems or about the equivalent ionizing radiation of eating 800 bananas, which are naturally radioactive.

The Nuclear Regulatory Commission (NRC), The Environmental Protection Agency (EPA), the Department of Energy, as well as other independent groups conducted studies in the aftermath of the accident, and came to the conclusion that for people living near the reactor the average person’s exposure to radiation was negligible. It was stated that in spite of serious damage to the reactor’s core, no adverse health affects to humans, animals or the environment could be attributed to the accident at Three Mile Island.

Needless to say, public reaction to the Three Mile Island accident went extremely overboard from what the actual event warranted.  This was largely due to misinformation in the press; misunderstanding of ionizing radiation among the general public; and the fact that, not 12 days before it happened, the movie The China Syndrome was released.  The plot of the movie was how unsafe nuclear reactors were with just about everyone in the movie but one of the main characters trying to cover it up.

The China Syndrome movie title’s concept comes from the premise that if an American nuclear reactor core were to melt down, it would melt through the center of the Earth to China.  Getting around the fact that it is actually the Indian Ocean that is on the opposite side of the Earth from the U.S., not China, and the obvious problems with the “melt through the Earth” premise, it couldn’t have been a better timed movie as far as free advertisement through the press due to the Three Mile Island incident. The movie was even nominated for several academy awards, including best actress by Jane Fonda.

So what happened to cause the accident? The short of it is: an unfortunate combination of sticky valves, someone checking the gauges without their glasses on and a few bad calls leading to a partial meltdown, which in turn led to the release of radioactive gases into the atmosphere.

The radiation leak wasn’t discovered until March 30, and at that time local residents were advised not to leave their homes. There was uncertainty among experts if the hydrogen bubble created by the core materials and the super-hot steam could cause further meltdown or even perhaps a giant explosion.

As a precautionary measure, Governor Thornburgh stated, among other things, that:

Pregnant women and pre-school age children leave the area within a five-mile radius of the Three Mile Island facility until further notice.

His statement did not have the effect of avoiding a panic as Thornburgh had hoped. A visit from President Jimmy Carter, a former nuclear engineer who helped dismantle a damaged nuclear reactor while serving in the Navy, did help.

Since the accident at Three Mile Island, not a single new nuclear power plant has been built in the United States. Even so, today about 20% of all electricity generated in the U.S. is courtesy of nuclear power.