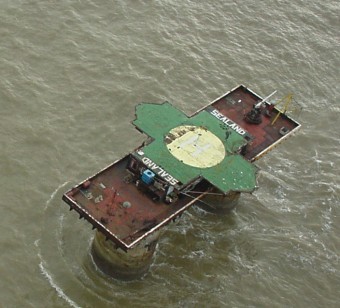 Pirate radio, kidnapping, battles- the principality of Sealand has seen all of these things and more, despite only being a tiny micronation lying about 7 nautical miles the coast from Suffolk, England.

If you haven’t heard of Sealand before, it is the site of one of Britain’s Maunsell Naval Sea Forts that were utilized during WWII. This particular one was originally named HM Fort Roughs. The fort’s primary function was to keep tabs on the Germans who were laying mines off the coast of England at the time. The structure itself was built on top of barge, which was then towed out to the present day location and sunk. Within about 30 minutes of the barge settling on the ocean floor, the crew of about 100 soldiers had it up and running.  (The fort itself can accommodate up to about 300 people.)

It remained in operation after the war for a time, but was abandoned by the Royal Navy in 1956.

It was left unattended for another 11 years before pirate radio broadcasters decided that it would make a perfect base of operations due to being situated in international waters. However, in the same year, a competing broadcaster by the name of  Roy Bates, broadcaster of the illegal station “Radio Essex” aka “Britain’s Better Music Station,” was caught by authorities and ultimately needed a new location for his pirate station.  What better place for a pirate radio station than at sea in international waters. Thus, he  decided he wanted the fort for himself. Using his military training- he was a Major in the British Army during the war- he managed to evict the squatters…before becoming one himself, along with his fifteen year old son, Michael who aided in the fight to take over the fort.

Bates never did utilise the fort for a radio station though. Shortly after his hostile takeover, it became illegal under British law, via the Marine Broadcasting Offences Act, to broadcast pirate radio, even outside a 3 mile radius of the coastline.  Previously, this was perfectly legal outside of that span.

As a result, Bates did what any rational being would – he declared his oceanic fort an independent sovereignty and renamed it Sealand. Oddly, this was a perfectly legal move, thanks to a loophole in the law that Bates’ attorney found.  Specifically, because the structure was not only in international waters, but also  had been abandoned by the UK, it was legally up for grabs to anyone who wanted it.

The UK military did for a time consider re-taking the fort, but decided if the Bates family pressed them during the invasion- perhaps firing on the military- and they were then forced to kill the family, it wouldn’t make for good press; so they abandoned the idea.  They did, however, destroy another of the forts that was still in existence to avoid any copycats.

There was also an issue in 1968 where Michael fired on a group of engineers that were working on some buoys near Sealand.  At one point, they started making catcalls up at Michael’s sister, Penny, and shouting various lewd remarks.  Prince Michael didn’t take kindly to the Princess of Sealand being spoken to in such an uncivilised manner, so fired several warning shots to shut them up.  It worked, but he was arrested once he returned to the mainland.  However, because the event took place in international waters and the platform, according to the court, was no longer under British jurisdiction, they let him off scot-free. This was a landmark ruling as now the British court system had officially declared the fort free from British rule.

With the court’s 1968 ruling, by 1975, Bates was doing his best to prove that he was serious about Sealand being a country. At the encouragement of his wife, Joan, he wrote a constitution, designed a flag, wrote a national anthem, invented a unit of currency and even had postage stamps made up. In the following years, he would also add passports to that list, which to this day you can purchase, but we’ll get to that.

During this time he was approached by a myriad individuals and organisations wishing to use Sealand’s location for their own gain. Bates turned them all away, at least until 1978. A group of self proclaimed diamond merchants from the Netherlands and Germany asked Bates and his wife to join them in Austria so they could discuss a business proposition.

Everything seemed to be legitimate until the meeting time came and went without the group showing up. Concerned, Bates attempted to make contact with Michael via phoning some fisherman, but learned from these fisherman that a helicopter had been spotted over the ‘country’. It turns out, the fort had been taken and Prince Michael had been locked in a cell without any food or water, before being deposited in the Netherlands with no ID or money.

The invaders were a group led by the self-proclaimed Prime Minister of Sealand, German lawyer Alexander Achenbach, who had hired Dutch, Austrian, and German mercenaries to aid him in taking over the fort.

Bates wasn’t going to give up his country so easily, though according to Michael was furious that his son had let the helicopter land.  The Fort itself is actually reasonably hard to invade given that their are no ladders or any such method of scaling from below, and the only other way to invade is via helicopter, which is easily fended off with rifles, assuming you aren’t being fired on yourself, which Michael wasn’t.

Once reunited with his son, Bates and Michael armed themselves and enlisted the aid of a helicopter pilot who had worked on the James Bond franchise, which is very fitting here.  According to Michael, they approached the fort into the wind, to mask the sound of the helicopter, and chose dawn to strike when the invaders were likely to be groggy or still asleep, but there was still enough light to attack by.

Michael and his father slid down ropes that were suspended from the helicopter, the former armed with a sawed-off shotgun and the latter with a pistol. The usurpers emerged from the fort to see what was going on.  While many reports say Michael fired a warning shot at them, which scared the invaders out of their wits (no doubt also because of the action hero-like entrance), Michael doesn’t claim such. He said in an interview that when he landed, he dropped his gun and when the butt hit the deck, the gun went off, nearly causing himself to be shot in the process.

Nevertheless, when the invaders saw the princes of Sealand had returned armed, they surrendered immediately and were subsequently tried and found guilty of treason, then held as POW’s until their home countries could negotiate their release. The price of this release was set at about the equivalent of $35,000 in Deutsche Marks, or about $125,000 today.

Those nations appealed to the UK to intervene to get their citizens back, but the UK government declined to step in, citing the 1968 court decision concerning Michael’s shooting at the engineers where the court had declared the fort independent of the UK.  Thus, they were absolved of any responsibility or obligation in the matter. This was a double-win for the Bates family, as once again the UK government seemed to be supporting their claim of sovereignty.

Germany then sent one of their diplomats to negotiate the release of the POWs.  This also bolstered the Bates family’s claim that Sealand was an independent nation, or so the family stated, as Germany had now undergone diplomatic relations with the micronation.

After a couple weeks of negotiation, the Bates family let the invaders go.  However, once back home, the ousted Prime Minister of Sealand, Achenbach, setup the Sealand Rebel Government, as a “government in exile” and the true rulers of Sealand.

No one else bothered to try and utilise the country again until the Falklands War in 1982. Some Argentineans asked Bates to sell Sealand to them due to its proximity to England. He respectfully declined.

These days, Sealand generates income by offering titles to regular Joes like you and me. For a mere £29.99 you can become a Lord or Lady of Sealand. Or, if you’ve got extra cash to blow, you can shell out  £199.99 and become a Count or Countess of the micronation.

The future of Sealand is somewhat ambiguous at the present time. Prince Roy (I don’t know why he didn’t go straight for King Roy) passed away in 2012, leaving Prince Michael as his heir, himself up there in years at 62, though he does have two heirs- Liam and James Bates.

As for the years ahead, there has been talk of expansion and the possibility of opening a casino or resort on site. All I can say is that if that plan goes ahead, I hope they work on the external decore. In the meantime, I think I might go and purchase myself a Knighthood.