The Sacking of Osceola 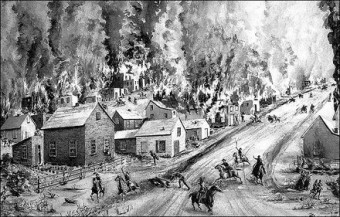 In 1861 in southwestern Missouri, near its border with Kansas, the city of Osceola was sacked by rabid anti-slavery jayhawkers (from Kansas). When the looting and burning were over, ten people were dead and the city was ruined.

The Kansas volunteers had been charged with the difficult task of breaking the Confederate hold on southwestern Missouri. Outnumbered, in open warfare, the Jayhawkers lost several conflicts, including their defeat in the Battle of Dry Wood Creek.

The anti-slavery troops found that less direct tactics were more effective, and General Lane was an advocate of “hard war” methods – where non-military targets, and in particular economic assets, were attacked.

Historians disagree over Lane’s motivations for targeting Osceola, Missouri. Some argue that Lane wanted to destroy his political enemy, the Missouri Senator Waldo P. Johnson, a Confederate sympathizer at the time. Others ascribe more noble motives, and hold that Lane wanted to stop Missouri’s secession, while also freeing slaves. Regardless, on the eve of the attack, Lane is reported to have instructed his men: “Everything disloyal from a Durham cow to a Shanghai chicken must be cleaned out.”

On the morning of September 23, 1861, Lane and his contingent of 2000 Jayhawkers attacked the town. Faced by only 200 Bushwhackers under the command of Missouri Guard Captain John Weidemeyer, the Kansas volunteers had little trouble overpowering them, and the Missourians, who lost one man in the battle, were forced to retreat.

The Jayhawkers looted goods, supplies and money, and in fact, it was reported that they:

Succeeded in capturing a heavy train of supplies destined for the armies of Generals Rains and Price, together with $100,000 in money.

In a frenzy, the troops reportedly got “so drunk that when it came time to leave, they were unable to march and had to ride in wagons and carriages.”

The Kansans also burned “almost everything in sight, including all but three of the town’s 800 buildings.”

General Lane’s total take was reported in The Newark Advocate and elsewhere:

Other reports note that Lane took for his private use, a piano and “a quantity of silk dresses.”

Before leaving, Lane held a mass summary hearing, and then executed nine Osceola residents, bringing the death toll up to ten.

Many believe the sacking of Osceola was the primary justification given by the Bushwhackers for their massacre in Lawrence, Kansas two years later. On the morning of August 21, 1863, 400 Missouri soldiers raided the town where General Lane resided, burning the city and killing between 160 and 190 boys and men.

General Lane survived the Lawrence Massacre by running and hiding in a cornfield.