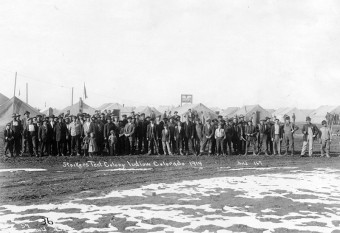 On April 20, 1914, up to two-dozen people were killed in a tent village adjacent to the Ludlow Coal Mine in Ludlow, Colorado. This massacre of striking workers and their families is widely seen as one of the lowest points in labor relations in U.S. history.

From September 1913 to December 1914, the United Mine Workers of America (UMWA) organized what has come to be known as the southern Colorado Coal Strike. Spanning the region, workers at a number of coal companies joined a mass strike demanding several changes in their working conditions including: enforcement of work day laws, fairer pay, wage increases, the ability to be represented by the union and the right to shop and live where they wanted.

In Colorado, miners (and their families) were paid poorly ($1.68 per day at the Ludlow mine, or about $38 in today’s currency). The job also had very high fatality rates and the workers and their families were required to live in houses, and shop at stores, owned by their employing coal companies. This led to very difficult living and working conditions, as noted by a federal mediator in October 1913:

Theoretically, perhaps . . . these men [should have been] as happy and contented as the managers claim . . . To have a house assigned you to live in . . . to have a store furnished you by your employer where you are to buy [goods] . . . at a price he fixes . . . to have . . . public halls free for you to use for any purpose except to discuss politics, religion, trade-unionism or industrial conditions . . . [To be] prohibited from having any thought, voice or care in anything . . . but work, and to be assisted in this by gunmen whose function it was, principally, to see that you did not talk labor conditions with another man. . . .

On September 17, 1913, the coal companies rejected the UMWA’s demands, and the miners were called to action:

All mineworkers are hereby notified that a strike of all the coal miners and coke oven workers in Colorado will begin on Tuesday, September 23, 1913 .. . We are striking for improved conditions, better wages, and union recognition. We are sure to win.

The UMWA anticipated that the strikers would be evicted from their company-owned homes – and they were. Prepared, the union had leased land close to the mine entrances and erected tents outfitted with wood stoves and built on wooden platforms.

During the work stoppage, striking miners would “greet” the replacement workers who crossed their picket line (“scabs”), and presumably, occasionally things would get out of hand.

To protect the scabs and ensure the work was done, mining companies hired private security guards through detective agencies.

The Ludlow mine was owned and operated by the Colorado Fuel & Iron Company (CF&I), itself owned by the wealthy and powerful Rockefeller family. To manage security at the site, CF&I hired the Baldwin-Felts Detective Agency.

Among Baldwin’s duties were to harass the strikers and to “break” or end the strike. One of their most effective techniques was to fire bullets at random into the tents when people were present. Another was patrolling the perimeter of the tent camp in a machine-gun mounted armored car, named “Death Special.”

An unknown number of people were killed and wounded prior to the massacre as a result of the random gunfire. To help protect their families, miners dug pits beneath their tents where they could hunker down, and, hopefully, avoid the bullets.

As the strike continued, Colorado’s governor ordered its National Guard to the site to keep the peace. After the body of a replacement worker (scab) was found dead on March 10, 1914, the National Guard’s commander, Adjutant-General John Chase, ordered the destruction of the tent camp. No one was hurt, and the strikers remained in their encampment.

Shortly after, most of the Guard was recalled due to State fiscal constraints. To preserve “order,” the governor allowed CF&I to raise a militia, comprised mostly of its private guards, and dress them in National Guard uniforms.

The day after Easter in the Greek Orthodox faith (many of the miners and their families were Greek immigrants), April 20, 1914, the conflict came to a head. While the leader of the tent camp was lured away to meet with the militia commander, two groups of militiamen took up positions to surround the camp, including installing a machine gun on a ridge overlooking it. When miners in the camp sought to go around the militia positions, a gunfight began.

As the fight progressed through the day, CF&I’s militiamen were replaced by fresh soldiers from among the mine’s private guards. Luckily, however, in the evening a train stopped on the tracks between the ridge (with the machine gun) and the tent camp. Using it as cover, many miners and their families escaped.

Shortly after, the entire camp was in flames. Four women and eleven children, who had taken shelter in a pit beneath a tent, were trapped when it caught fire. Only two of the women escaped.

The camp leader, who had returned in time for the assault, was captured by authorities and later found shot dead, along with two other miners. Four of the militia and/or guardsmen were also killed.

According to the UMWA: “later investigations revealed that kerosene had intentionally been poured on the tents to set them ablaze.”

Incensed, other miners in Colorado launched a series of attacks against coal mines across the state over the next 10 days. In some locations, weapons and ammo were distributed to miners at UMWA headquarters. Over and again, miners faced off against private militiamen and guards, and the conflict only ended when federal troops, sent in by President Woodrow Wilson, disarmed both sides. When the smoke cleared, somewhere between 69 and 199 people had been killed.