Why the Ferris Wheel is Called That 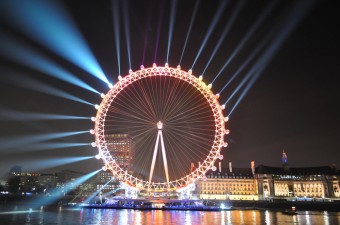 Today I found out why Ferris wheels are called that.

A necessity at any county fair or festival, Ferris wheels stand out like a beacon on the horizon leading eager fair-goers to crowded rides and overpriced popcorn and funnel cake.

But before there were Ferris wheels, there were simply “pleasure wheels.” These wheels weren’t nearly as large as most Ferris wheels are. Rather, they were just big enough to hold a few passengers who sat in chairs that were suspended from wooden rings. The wheel had to be turned manually.

One of the first known accounts of riding one of these early pleasure wheels was recorded by Pietro Della Valle. He was a Roman traveller who was visiting Constantinople during a Ramadan festival in 1615. At the festival, he decided to take a ride on the pleasure wheel to see what it was like:

I was delighted to find myself swept upwards and downwards at such speed. But the wheel turned round so rapidly that a Greek who was sitting near me couldn’t bear it any longer, and shouted out “Soni! Soni!” (enough! enough!)

Pleasure wheels spread throughout Europe in the 17th century and made their way to America in 1848 when Antonio Maguino built one to attract visitors to a new fair in Georgia.

Nearly half a century later, in 1892, William Somers installed three fifty-foot wheels at Coney Island, Atlantic City, and Asbury Park. The giant wheels were a marvel at the time, due to their extreme size. Somers was granted a patent for his ride, which he called a “Roundabout.”

Sometime between the installation of the rides in 1892 and the middle of 1893, a soon-to-be-famous man sat on the wheel in Atlantic City. His name was George Washington Gale Ferris, Jr.

Ferris had been drawn to Chicago a few years before. It had been announced that the World’s Columbian Exposition would be held there in 1893, and the exposition’s organizers challenged American engineers to come up with a structure for the fair that would be even better than the Eiffel Tower, which had been featured at the Paris International Exposition in 1889. They requested something “daring, original, and unique” to act as a monument at the fair.

A graduate of Rensselaer Polytechnic Institute who got his start in the railroad industry before moving on to bridge building, Ferris was up for a challenge. Undoubtedly inspired by his ride on the Atlantic City Roundabout, Ferris proposed an even greater venture which he claimed would “Out-Eiffel Eiffel.” According to Ferris, he came up with the idea over dinner:

…down in a Chicago chop house… I hit on the idea. I remember remarking that I would build a wheel, a monster. I got some paper and began to sketch it out. I fixed the size, determined the construction, the number of cars we would run, the number of people it would hold…and my plan has never varied an item from that day.

At its completion, the very first Ferris wheel certainly was a monster. At 264 feet tall (80.46 meters), it was by far the largest attraction at the World’s Columbian Exhibition that year. The wheel had 36 cars, each of which could carry 60 people, making the total carrying capacity a whopping 2,160 happy fair-goers at once. Nearly 40,000 people rode the Ferris wheel daily at the fair, each paying 50 cents (about $13 today) for a 20-minute ride. By the time the Ferris wheel was too old to carry more passengers, some 2.5 million people had taken a ride on it.

But the construction of the Ferris wheel wasn’t without problems. First, Ferris had to get the project approved. The fair planners liked the idea, but they worried that the proposed structure wouldn’t be safe towering over the fair grounds. In fact, another man had proposed a wheel similar to Ferris’ in 1891 and was told by the fair planners that “nothing of the kind will be permitted on the grounds.”

Ferris wasn’t to be deterred, though. He gathered respectable investors to put money into his idea. Persuaded that the $400,000 (about $10.4 million today) wheel would be paid for—and might even make a monetary return to dig the fair out of debt—the planners conceded to the idea and allowed construction on the monstrous wheel to begin.

Of course, William Somers had something to say about Ferris’ famed wheel, and in 1893 Ferris was slammed with a lawsuit. Somers claimed that Ferris had infringed on his patent, but the judge found that there were enough structural differences for the Ferris wheel to be an invention in its own right. Being five times the size of Somers’ wheel probably had something to do with it.

The Ferris wheel was dismantled and packed away in April 1894, but it was set up again on Chicago’s north side where it operated until 1903. At that point, it was dismantled again and travelled to the St. Louis for the 1904 World’s Fair. After reaching the end of its life-cycle in 1906, it was destroyed using dynamite.

Given that Ferris’ wheel was widely publicized and by far the largest at the time, even well over a century later, we’re still calling such rides, regardless of who made them or their specific design “Ferris wheels”.