This Day in History: February 7th 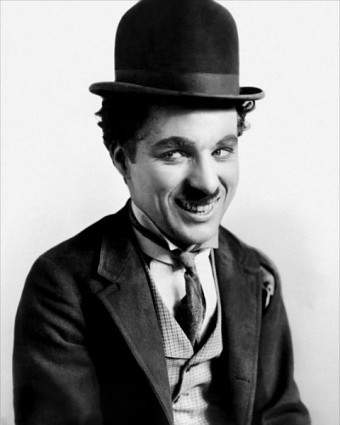 One hundred years ago today, comedic genius and cinematic pioneer Charlie Chaplin made a few wardrobe choices that resulted in one of the most recognizable and iconic film characters of all time. Chaplin described his ensemble in his autobiography: “pants baggy, coat tight … hat small, shoes large.” He went on to say, “I had no idea of the character, but the clothes and the makeup made me feel the person he was.”

They say the clothes make the man, but in the case of Chaplin’s Little Tramp, the wardrobe, brilliant as it is in its complete suitability, is only a small part of the character’s appeal. Chaplin’s choice of accoutrements draws us in visually, but his unerring ability to persuade us to invest ourselves emotionally in the Little Tramp’s travails – without the aid of language – is the true measure of Chaplin’s greatness. Even after a century, the Little Tramp still gets you “right here.”

Chaplin’s Little Tramp is a study of contrasts. He is shabbily dressed, but never slovenly, of the lowest social order but boasting impeccable manners, incredibly unluckily but externally optimistic. Having grown up desperately poor in London, Chaplin knew a thing or two about being destitute, and was no sentimentalist.

His films were quick to point out the arrogance of the wealthy and the hypocrisy of the middle class. Through the eyes of the Little Tramp, the audience sees how dismissive, and even cruel, the higher classes can be to those they deem not of their ilk.

For example, in Chaplin’s 1925 film “The Gold Rush,” the Little Tramp develops a crush on an upper class girl, and her friends catch wind of it. They encourage the Tramp to throw a New Years Party, assuring him that they, and his crush of course, will all be in attendance.

Naturally, they have no intention of spending New Year’s at some poor guy’s cabin, to them it’s just a big goof. Whether or not the Tramp’s feelings will be hurt wouldn’t even cross their minds. And even if it did, they figure he has it coming for daring to have a crush on someone so far out of his league.

Many of Chaplin’s films followed this underlying theme, which still resonates today.   But in the end, none of this really mattered. The Little Tramp never got the girl, or the job, or whatever it was he was hoping to acquire. The film ended with him walking away, shoulders slumped dejectedly, as the picture begins to fade to black. Then, just before it does, our hero stands a little taller, shrugs off his latest defeat and kicks his heels. He struts off with an air of added confidence, a “just wait ‘til next time!” in every step.