This Day in History: February 10th 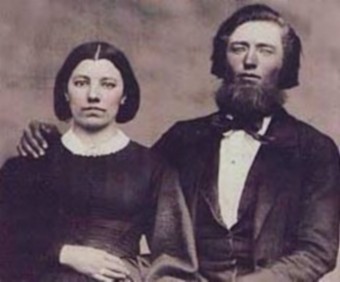 The Real ‘Ma’ and ‘Pa’ Ingalls

On this day in history, 1957, famed writer Laura Ingalls Wilder died. Wilder’s writing career didn’t begin until she was 60 years old. The main purpose for writing her first book “Little House in the Big Woods,” was to ensure her beloved Pa’s stories wouldn’t be lost and forgotten. She often told her daughter Rose these tales of traveling across the endless prairies by covered wagon and dancing to Pa’s fiddle on the cold, dark winter nights. As she said,

I wanted children now to understand more about the beginnings of things, to know what is behind the things they see—what it is that made America as they know it.

Rose urged her mother to put pen to paper so these wonderful tales of family – and American – history would not be lost to the passage of time. When Laura completed that first book, the idea struck her to write a series of books depicting her young life, which also coincided with the growth of the American frontier.

The eight books in the series explore Laura’s adventures from her earliest childhood when she was born in a log cabin in Pepin, Wisconsin on February 7, 1867, to the first years of her marriage to Almanzo Wilder on a homestead in De Smet, in the Dakota Territory. She finished her last book at the age of 76.

Laura, along with older sister Mary, and two younger sisters Carrie and Grace, moved around the Mid-west like nomads for much of their childhoods. When Laura was two, the family traveled to Kansas by covered wagon, where they made the faux pax of settling on land that belonged to the Osage Indians.

The family settled in Walnut Grove, Wisconsin for a spell, and this is the time and place the popular TV series is based on. (TV Pa’s beauteous hair makes one wonder just what brands of shampoo and conditioner were available at Oleson’s Mercantile.)

In 1879, the Ingalls hit the road again, this time setting up shop in De Smet. Laura earned a teaching degree and got her first job while living there. She taught 12 miles away from the family home, and was driven back and forth for weekend visits by a young man named Almanzo Wilder. On August 25, 1885, they married, and in 1886 their daughter Rose was born.

After four years of drifting, they finally settled in Mansfield, Missouri on a 200-acre farm in the Ozarks. The couple dubbed it Rocky Ridge Farm, where they lived until Almanzo’s death in 1949, and Laura’s in 1957.