This Day in History: February 3rd 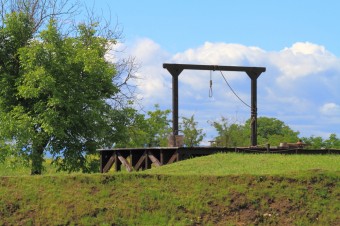 Just as the clock was striking midnight in Litchfield County, Connecticut on February 3, 1780, a young man brutally bludgeoned to death his landlord Caleb Mallory, Caleb’s wife Jane and their nine-year-old granddaughter. After the murderer robbed the home, he burned it down with two of the couple’s other sleeping grandchildren still inside, two boys- aged six and four.

His name was Barnett Davenport, a 19-year-old soldier – and deserter – of the Continental Army, and often cited as America’s first mass-murderer (though we think the Native Americans, particularly, might argue with that one).

Michael-John Cavallaro, an author and history detective from New Milford, CT, had been tirelessly researching this gruesome and tragic tale when he discovered a 14-page confession by Davenport at the University of Virginia in the summer of 2010. In it, Davenport exhibits classic signs we associate with a sociopath: an obsession with committing murder from a young age, habitual robbery and pathological lying.

Davenport also made yet another slimeball move, this one implicating his kid brother in the murder.

Barnett managed to remain hidden for six days before he was apprehended, and during that time his younger brother Nicholas was arrested. Turned out his big bro had “borrowed” his identity to get hired at the Mallory’s farm, which also made it quite easy to frame Nicholas for the murders. Cavallaro reports that according to the scant contemporary evidence available, most believed Nicholas was involved in the crime or least tried to cover for his brother, which must have made for awkward Sunday dinners.

In any case, Barnett’s recently re-discovered confession finally puts that theory to rest.

Barnett Davenport was found guilty of murder and arson. He was sentenced to 40 lashes and to hang at Gallow’s Lane at Litchfield, CT on May 8, 1780. His brother Nicholas was sentenced to 40 lashes and life imprisonment at Newgate Prison. He was also forced to stand and watch his brother die on the gallows. Nicholas went to prison, but escaped. He was duly returned, but was released two years later.