This Day in History: February 28th 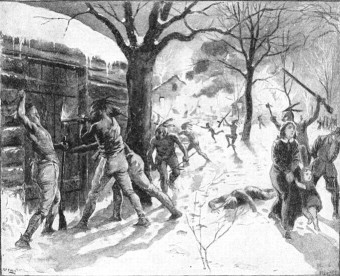 When you visit the Old Burying Ground in Deerfield, MA, tucked away in the back corner there is a grassy mound with a weathered gravestone atop it. The only inscription it bears is the date “1704.” It is in memory of the 50 inhabitants of the tiny village killed in the overnight hours on February 28/29 by French and Native American raiders.

The rest of the town’s inhabitants – 100 people in all – were forced by their captors to march north in a few feet of snow to Montreal. Some simply fell over and died along the way; others who couldn’t keep up were hacked to pieces. When they arrived in Canada, 88 prisoners had survived the ordeal. Most of the captives were sold to the French, who in turn ransomed them back to the colonists over the course of several years.

If you were from the area, this was the horror story you grew up hearing. Of course, if you were from the area, chances are you were told the story handed down from the English colonists. What happened in Deerfield was revolting, but it was not an isolated incident. Instead, it was one event in a chain reaction set off between the English and the French centuries before across the pond, with the addition of three Native American tribes (the Wabanaki, Hurons, and Mohawks) in the New World adding to the stew of drama and resentment. And everyone had their own agenda.

The French King, Louis XIV, had a vested interest in what transpired in the area. The last thing he wanted was the English colonizing further, especially north of Massachusetts. At the time, Deerfield was the most north-westerly English settlement, and Louis XIV wanted to keep it that way. A raid on Deerfield was definitely in France’s best interests.

France had no shortage of willing combatants. There were many Canadian-born French nobles willing to fight for perks and promotions. In addition, the French needed more skilled labor for their burgeoning settlements, and the English knew how to construct sawmills and other useful things. This made them very handy to have as captives.

The Native Americans who allied themselves with the French forces all had their own reasons for doing so. They were enraged at the English colonists for their arrogant land-grabbing. Some were interested in procuring captives they could use as slaves or sell for ransom. When certain tribes lost family members, the women demanded raids to replenish their numbers.

There was plenty of killing going on, and the English were doing more than their fair share. It’s no secret that the colonists were very aggressive about taking away lands belonging to the Native people, and had no problem wiping out huge numbers of “savages” to do so. And killing the French had been a favorite English pastime for hundreds of years. Crossing an ocean had done nothing to change that.

But not every English colonist involved in the raid ended up dead, enslaved or bitter. Several girls from Deerfield ended up staying in Canada and went on to marry Native American or French Canadian men, while other of the young girls were adopted by the Mohawk tribe and settled near Montreal. The daughter of Deerfield’s pastor, Eunice Williams, refused to be ransomed from Canada despite her father’s urging. She married a Mohawk, but returned to Deerfield to visit several times to spend time with family, so apparently there were no hard feelings in her case.