This Day in History: February 21st 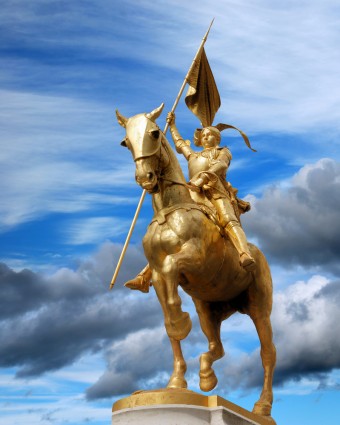 It would seem highly improbable that a simple peasant girl from a small village in France would have better name recognition 600 hundred years later than the reigning kings of the time. But Joan of Arc, who only lived to be 19 years old, already had the stature of a mythological figure while she still walked the earth in human form.

By all contemporary accounts, there was nothing to distinguish Joan from her peers except from her exceptional piety, that is until she began to hear the voices and have visions of St. Michael, St. Catherine, and St. Margaret. (Now we’d likely call Joan a little crazy, but back then the term was “prophet”… or “witch,” depending on how the masses reacted to the individual.)

These voices instructed Joan to help King Charles boot the English out of France.  At the time, the English controlled and claimed sovereignty over a large portion of France. The voices and visions were so frequent and persistent that 16-year-old Joan became convinced that God’s intended purpose for her was to deliver France from the hands of English tyranny. She decided to travel to Chinon to seek out King Charles and let him in on God’s plan for freeing France.

When she shared her intentions with her parents, they tried to dissuade her, brushing off her visions as nothing more than vivid dreams produced by an over-active imagination. But Joan was all fired up and after impressing a garrison commander with a military prediction that ultimately proved correct, she hit the road, and was received with kindness by Charles VII when she arrived in Chinon.

Her calm, matter-of-fact manner as she stated she would see him crowned at Rheims, as God had sent her to lead the charge for the release of Orleans obviously made an impression on her sovereign, or he could have simply seen the advantage of having the general public think his kingship was divinely supported.

After years of one humiliating defeat after another, both the military and civil leadership of France were demoralized and discredited. When the Dauphin Charles granted Joan’s urgent request to be equipped for war and placed at the head of his army, his decision must have been based in large part on the knowledge that every orthodox, every rational option had been tried and had failed. Only a regime in the final straits of desperation would pay any heed to an illiterate farm girl who claimed that the voice of God was instructing her to take charge of her country’s army and lead it to victory.

Whatever the case, after conferring with his nobles, he did indeed put the young Joan of Arc at the head of an army of 5,000 against the English at Orleans. I am woman… well, in this case, girl – hear me roar.

Joan dressed the part of a warrior – she cut off her hair, dressed like a dude and donned armor. But she knew that looking like a soldier and acting like one were two different things, and she told her voices that she “knew not how to ride or lead in war.” Yet somehow she led an exhausted and ill-equipped French army to a series of stunning victories on the instructions of the voices in her head, earning her the nickname the “Maid of Orleans.”

Charles was crowned King of France at Rheims, and Joan was present to see it happen. After the coronation, Joan asked leave of her king to return home to her family, but Charles wanted her to hang around awhile, as there were still some pesky English lurking about. This made Joan uneasy, as she was no longer hearing voices and didn’t know diddle about warfare herself.

But you don’t say no to your king, and when Joan was leading a battle against the Duke of Burgundy, she was taken prisoner and sold to the English. She languished in a dank prison cell for over a year, until an ecclesiastical court put her on trial for witchcraft and sorcery.

Since they had to at least make a show of having a specific reason for bumping her off, the fact that Joan dressed in men’s clothing seemed as good as any, so they ran with that. For a brief time she did switch to wearing a dress while imprisoned, but went back to breaches that were extremely difficult to remove (including two layers attached to her jacket with 20 fasteners) after the easy access the dress offered to soldiers and other men who visited her cell proved something of a problem for her, which she wasn’t shy of complaining about as you might expect.  (To protect her virtue, it was customary to have only women get access to such a prisoner, but Joan did not receive this courtesy.)  Her explicit reference to protecting said virtue as a reason for dressing like a man was considered a valid one by the church at the time and posed something of a problem for condemning her on these grounds.

But that was OK as her refusal to renounce the voices of the saints that led France to victory was also used as proof that the Devil was at work within her. And the king that owed his throne to her, Charles VII, didn’t lift a finger to save Joan during her trial, despite the fact that it was customary for a captured soldier’s or dignitary’s family and friends to ransom them; so the option was probably on the table. But she had already served her purpose. There’s gratitude for you.

Joan of Arc was sentenced to execution by burning at the stake, which was carried out on May 30, 1431 at the market place in Rouen. A sympathetic English soldier hastily made a small wooden cross for her that she placed in the front of her dress, while two clergymen held up two more that she could fix her gaze on as she passed from this world to the next.

A posthumous retrial was held in 1456, and Joan was declared innocent of all charges and a religious martyr. She was canonized by the Catholic Church much later in 1920.