When the Beatles Met Muhammad Ali 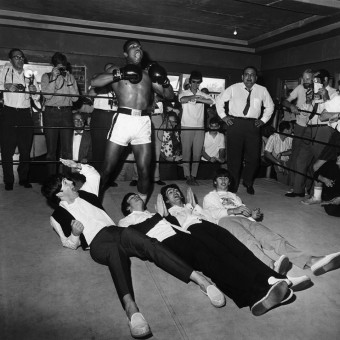 Photo by Harry Benson: Muhammad Ali and The Beatles, 1964

It was February 18, 1964. The Beatles had arrived in America just 11 days earlier and had taken the nation by storm. They already had the number one record on the charts and several others quickly catching up. They had appeared on the Ed Sullivan show before 73 million awestruck and curious fans. It was the highest rated television broadcast in history up to that point. They had partied briefly in the Big Apple, done a quick concert in Washington D.C. and two more special concerts at the legendary Carnegie Hall.

Now they were in Florida, soaking up the sun and relaxing after a second Ed Sullivan show appearance. The boys requested to meet the world heavyweight champ- the surly, misanthropic Sonny Liston. But Liston quickly replied that he had no desire to meet “those bums.”

Interestingly, Liston was in the crowd watching their second Ed Sullivan appearance on Feb. 16th. Nevertheless, he was not exactly a “fan” calling them “sissies” and saying, “My dog can play drums better than that guy”- referring to Ringo.

And so it was, the Beatles had to settle for “second best” and meet Liston’s challenger for the title, a brash 22-year-old named Cassius Clay. Clay and Liston were scheduled to meet for the heavyweight championship in a week on Feb. 25th. (Coincidentally, George Harrison’s 21st birthday.)

Clay was training at the Fifth Street gym and the Beatles casually marched in. Clay was cordial at first, calling them “the greatest” and saying they “shook up the world.” He reportedly also called Paul McCartney, “The prettiest, but not as pretty as me!”

But soon, the general tone changed and it was clear who the real “star” of the show was. The Fab Four and Clay posed for several photo ops, during which Clay brusquely ordering them around. The Beatles obeyed and seemed to take it all in good humor.

Clay posed over them as the Beatles laid flat on the ground. (John Lennon comically praying in the photo.)

It got slightly uncomfortable when Clay barked “Squirm, you worms!” to the surprised quartet. Finally, as the boys were getting ready to leave, Clay picked up Ringo and tossed him up in the air a bit, then caught him.

Clay then wished Ringo and the others good luck.

He even recited a trademark poem: “When Liston reads about the Beatles visiting me, he’ll get so mad I’ll knock him out in three!”

All seemed well and routine on the surface, but it wasn’t quite so perfect below it.

According to the Beatles’ famed photographer, Harry Benson, who set up the meeting, the boys did not enjoy the meeting as much as it appeared. “They were expecting to meet a dumb boxer,” he explained, and were caught off guard by Clay’s glibness. He went on to state that the Beatles were “stunned” when they left, and that, “It was the first time someone else had taken over.”

Needless to say, the Beatles were so mad about the session with Clay that they didn’t speak to Benson for several days.

As Lennon later stated, “He [Clay] made a fool out of us!” But as one looks at the old black-and-white newsreel and photos of the legendary encounter, one sees nothing but big beaming smiles all around.

The event was quickly over and the Fab Four soon moved on the conquer the entire world with their incredible, brilliant music and wit.

Clay, a 7 to 1 underdog, was to knock out Sonny Liston (in 7 rounds, not 3) and become the most famous boxer of all-time.

Immediately after the victory, Clay would inform a shocked world that he now a Muslim and his new name was “Muhammad Ali.”

Both Ali and John Lennon were to later have a profound impact on the Anti-Vietnam war movement. Ironically, both, by the late sixties, were also to be cast by millions as “villains,” after originally being known as lovable, harmless guys.

But even on that innocent February day in 1964, a bit of the real John Lennon came to the surface. During the photo op, as Clay’s open mockery continued, he chided the quartet and said “You’re not as dumb as you look!”

“No, but you are!”, Lennon snapped back.