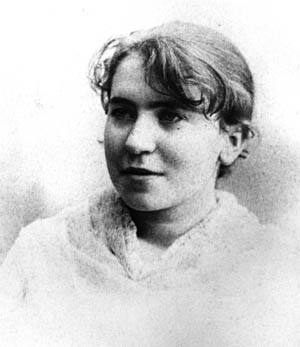 Goldman was born in 1869 in Lithuania, the first child from her mother’s second marriage to a man who desperately wanted a son. Her father was abusive, using a whip on Goldman who he believed was the “most rebellious” of the children, and her mother didn’t stop him. Goldman found comfort in her older half-sister at home, but she was unprotected from the harsh realities of being a headstrong girl in the late 1800s elsewhere. She was regularly beaten at school for being disobedient.

Her family ended up moving to St. Petersburg, Russia, where her father tried and failed at business. Soon, her family descended into poverty and she was forced to give up her studies to work. After asking to go back to school, her father reportedly tossed her French book into the fire and shouted,

Girls do not have to learn much! All a Jewish daughter needs to know is how to prepare gefilte fish, cut noodles fine, and give the man plenty of children.

As Goldman clearly wasn’t going to get much help in the way of education at home, she took it upon herself to study independently. She was particularly intrigued by political upheaval and found herself attracted to other headstrong women that she read about. As such, she defied her father when he attempted to set up a marriage for her when she was just fifteen years old.

In 1885, Goldman decided to join her half-sister Helena on a journey to the United States, where they would join their other sister, Lena and her husband. Her father refused, of course, but Goldman eventually got her way. She settled in New York and started working as a seamstress in various factories. There, she met some like-minded individuals who advocated for equality and social change.

While in New York, she also met one Alexander Berkman who, in 1892, was convicted of attempted murder and sentenced to 22 years in prison for his part in the Homestead plot. He had attempted to kill Henry Clay Frick, a man who strongly opposed the union at his steel factory. Goldman actually had some part in this as well. In addition to helping plan the whole thing, Goldman tried to raise money through prostitution, but ended up giving it up after being told she wasn’t any good at it.

Plotting to murder someone is probably evidence enough that Goldman was a little radical, but in case you’re still unconvinced, she had a few other incidences worthy of mention. After Berkman’s imprisonment, their old mentor, Johann Most, “lashed out” at him for being foolish. Most was supposedly all for using violence to get change accomplished, and Goldman felt his attacks were hypocritical. She ended up striking him with a toy horse whip in front of a crowd before breaking it and throwing the pieces at him.

In addition, Goldman herself was arrested just a little while later for “inciting to riot.” While speaking to a crowd of over 3000 people during an economic depression, she encouraged them to take what was needed to survive by force. Obviously, the police didn’t like that, and they took her into custody. Goldman wasn’t one to go quietly, however; during the train ride from Philadelphia to New York where she would stand trial, she threw a glass of water in the attending officer’s face. She ended up being sentenced to ten months in prison.

It was not the last time Goldman would be arrested. In 1901, she was implicated in President McKinley’s assassination after Leon Czolgosz said he had been inspired to commit the murder after attending one of her speeches. Lack of evidence meant that Goldman was not convicted, though Czolgosz was tried and executed for the crime.

Afterwards, Goldman was arrested again for holding a meeting about Czolgosz. Berkman had been released from prison at this point, and he went about trying to get her freed, claiming her right to assembly had been violated. Goldman also started up her own anarchist publication called Mother Earth, she continuously delivered speeches on her ideals, and became a huge advocate of birth control.

Goldman was actually put in prison for a few weeks for refusing to pay a fine for violating the Comstock Law, which prohibited articles written about “lewd” subjects such as birth control. She was arrested yet again at the start of the United States’ involvement in World War I, after she was found with anti-conscription propaganda, and she was sentenced to two years in prison.

Unfortunately for her, by the time she was released America was in the middle of the Red Scare—and, if you remember, she had spent the greater part of her childhood in Russia. She ended up being deported in 1919, despite having spent the majority of her life in the United States.

She spent the next decade touring Europe and finding all manner of things wrong with various governments. Goldman was hugely critical of communism, which shocked many of her followers, and didn’t bode well for her time in Russia. She did return to the United States in 1933 to talk about her autobiography, Living my Life, which she had started writing some years before. She was allowed into the country on the condition that she would not speak about any current events.

In 1939, she was steadfastly opposed to World War II, stating: “Much as I loathe Hitler, Mussolini, Stalin and Franco, I would not support a war against them and for the democracies which, in the last analysis, are only Fascist in disguise.”

She would not live to see the war’s end. In 1940, she suffered a stroke which left her unable to speak. Though she was still able to see guests, she was in poor condition. A second stroke just a few months later caused her to deteriorate quickly, and she died within the week on May 14. She was buried in Chicago, after the United States government allowed her body to be brought back in to the country. She left behind a legacy of anarchist and feminist sentiment.

Many of Goldman’s political and social ideologies are still being debated today. In addition to the radical notion that women should have access to birth control, she was pro-women’s suffrage, anti-abstinence education, and critical of religion, among other things.

Advocating for women to be allowed to run for political positions, she wrote:

I see neither physical, psychological, nor mental reasons why woman should not have the equal right to vote with man. But that cannot possibly blind me to the absurd notion that woman will accomplish that wherein man has failed… Are we to assume that the poison already inherent in politics will be decreased, if women were to enter the political arena?

As for her religious views, while you’ll find the following quote decidedly “atheist,” it’s thought that a lot of her social ideals possibly arose from her Jewish heritage, which taught her from an early age that fairness and equality were paramount.

Religion! How it dominates man’s mind, how it humiliates and degrades his soul. God is everything, man is nothing, says religion. But out of that nothing God has created a kingdom so despotic, so tyrannical, so cruel, so terribly exacting that naught but gloom and tears and blood have ruled the world since gods began.

Since her death, Goldman has been featured in a number of books and movies, and she even has a coffee shop named after her in Maryland: Red Emma’s Bookstore and Coffeehouse. She certainly led a colourful life and, though she is much less well known than many other prominent feminists of her era, we have her to thank for making some strides towards equality for women.