Smedley Butler and the Business Plot 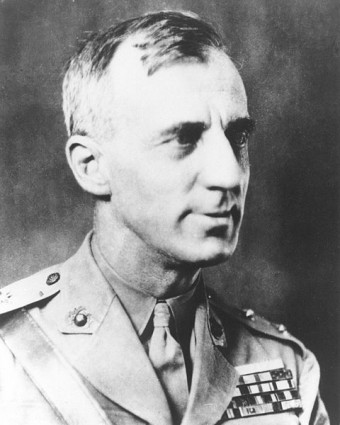 In 1933 and 1934, an alleged plot to overthrow the government of Franklin Delano Roosevelt (FDR) by Wall Street Bankers may have happened. While contemporary newspapers called it a “gigantic hoax,” others, including the House’s Special Committee on Un-American Activities, found the allegations “credible.” You decide:

During the campaign of 1932, FDR’s promise of jobs for the unemployed frightened businessmen, who feared he would turn their capitalist nation socialist, and engage in reckless government spending. To add insult to injury, one of Roosevelt’s first economic acts as President was to abandon the gold standard in April 1933.

This is despotism, this is tyranny, this is the annihilation of liberty . . . . The ordinary American is thus reduced to the status of a robot. The president has not merely signed the death warrant of capitalism, but has ordained the mutilation of the Constitution, unless the friends of liberty, regardless of party, band themselves together to regain their lost freedom.

According to those who believe there was a plot, several members of the league, fearful of the socialistic and communistic (in their mind) reforms FDR intended, planned to overthrow his administration. The plotters included a du Pont, a former presidential candidate, a former governor of New York, Wall Street bankers and a director of Bethlehem Steel.

Two members of this Wall Street Putsch were Gerald MacGuire, a well-connected bond salesman and commander of the Connecticut American Legion, and William Doyle, also a former American Legion commander.

At this time in the U.S., in the midst of the Great Depression, fascism was not seen as an entirely bad thing by a number of Americans. In fact, one historian has noted: “The success of Huey Long [the popular and powerful governor of Louisiana] seemed evidence that fascism could come from within . . . with the acquiescence of the people.”

In fact, advocates of the right wing style government believed they had a ready militia just waiting for them in the posts of the American Legion:

The impoverished but well-trained veterans of the First World War were the ideal candidates for a fascist militia [and] through the American Legion, they were already organized and uniformed . . . [with] nearly a million members.

Without a doubt, Smedley Butler was an American hero. Joining the marines at the age of 16:

He served first in Cuba as an under-aged lieutenant in 1898 . . . performed acts of death-defying heroism in the Boxer Rebellion while still in his teens . . . was awarded his first of two Medals of Honor in Mexico [and became] commandant of the Haitian native police. . . . In China from 1927-1929, Butler . . . was promoted to Major General . . . .

No lapdog to the establishment, Butler frequently came afoul of the powers that be. In 1932, he defended the Bonus Marchers, a protest of 20,000 impoverished World War I veterans camped out in Washington, DC trying to obtain benefits.

Butler was very popular with the veterans, and was frequently asked to speak to veterans groups. In an address to a convention of the American Legion in 1931, Butler said:

Butler remained an advocate for soldier’s rights and continued to lecture against war profiteering, and his fear that fascism was rising in the U.S.

Most of the record of the plot comes from General Butler’s testimony before the House’s Special Committee (McCormack-Dickstein Committee). He claims that in 1933, he was approached by Doyle and MacGuire under the guise of helping reform the American Legion.

The beginning of the plot required Butler to “plant” 200-300 regular legionnaires in the audience at the annual convention, encourage them to make a fuss, and then emerge and make a speech – written for him by Doyle and MacGuire. When asked where the money to transport the soldiers to Chicago would come from, Butler says MacGuire told him: “Oh, we have friends” that include Grayson Murphy.

Butler demurred, but then was later approached by Robert Clark, heir to the Singer sewing machine fortune, who explained that the speech was important to their plan to return America to the gold standard:

I do not want to lose [my fortune]. I am wiling to spend half . . . to save the other half. If you go out and make this speech in Chicago, I am certain that they will adopt the resolution and that will be one step toward the return to gold.

Butler refused to give the speech.

After the convention, in November 1933, MacGuire approached Butler again, this time to lead a “great big super organization to maintain the democracy,” which he described later as a “French organization of super soldiers.” MacGuire reportedly told Butler the soldiers would “support the President . . . [by seeing] that he doesn’t change the method [of financing the Government].”

The plot, according to Butler, also involved the installation of “an Assistant President,” a Secretary of General Affairs, to help the overworked and disabled FDR, about whom “everybody can tell that the President’s health is failing . . . and the dumb American people will fall for it in a second.”

Butler never joined the plot, but spoke with his friend and Philadelphia Record reporter, Paul Comly French about it. French investigated in September 1934, and testified that when asked, MacGuire told him that:

We need a Fascist government in this country. . . . . The only men who have the patriotism to do it are the soldiers and Smedley Butler is the ideal leader. He could organize a million men overnight.

The Cat Left the Bag

Somehow, Congress got wind of the plot, and called General Butler and French to testify in November 1934. After the plot was revealed, the knives came out and in New York, the story was that it was all a misunderstanding.

In fact, the mayor Fiorello LaGuardia spoke with the Associated Press on November 22, 1934, which reported:

Mayor LaGuardia of New York laughingly described today the charges of General Smedley D. Butler that New York brokers suggested he lead an army of 500,000 ex-service men on Washington as “a cocktail putsch.” The Mayor indicated he believed that some one at a party had suggested the idea to the ex-marine as a joke.

No one was ever prosecuted for the Business Plot.

The Forgotten Treason: The Plot to Overthrow FDR

The Plot to Seize the White House

Wall Street: A History: from Its Beginnings to the Fall of Enron

When the Bankers Plotted to Overthrow FDR