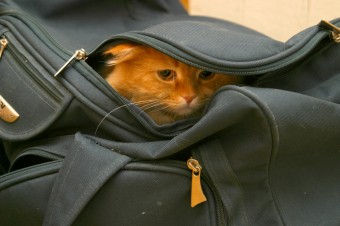 The famous humorist and writer Will Rogers once said, “Letting the cat out of the bag is a whole lot easier than putting it back in.” But where did this expression come from and why is it used in this way?

For those who aren’t familiar with the saying, the idiom “let the cat out of the bag” means to reveal a secret or disclose facts that were previously hidden. It can also be used to refer to someone who is a “blabbermouth.” The saying provides quite the visual – a cat, playing the part of the “secret,” sprinting out of the “bag,” playing the role of where the secret was hiding. Much like a cat that was once trapped in a bag, once that secret is out, it’s never going to go back into that bag again.

The first recorded use of this phrase comes from a book review in a 1760 edition of London Magazine (which is still published today). The reviewer complains that, “We could have wished that the author had not let the cat out of the bag.”  Taking from the context, it seems that the reviewer wished the author had not spoiled a surprise or secret in the book.

According to the Phrase Thesaurus, there were several instances of this expression being used during the late 18th century in literature, often with quotations around the phrase, potentially indicating that it was a newly coined expression.

There have been a few origin stories put forth about how this idiom came to be. The first one, which doesn’t seem likely at all, comes from a proposed market practice. All sorts of livestock were traded in open-air markets during this time, including pigs. Businessmen would sometimes sell piglets in bags, or, as the expressions states, “pigs in poke”.  (Poke means “bag” or “sack” and the full idiom states, “When a pig is offered, open the poke.” In other words, a buyer should always check and inspect what they have before leaving the market. This idiom dates back to at least the 16th century, if not more.)

Thus, as this particular origin theory of “let the cat out of the bag” goes, the unscrupulous sellers would sell the “pig” in a bag, but instruct the buyer not to open it until they get home, lest the pig escape.

The buyer would carry a wiggling bag all the way home, only to have it revealed when opened that they had received a feral cat instead of a piglet. As one could imagine, feral cats were worth (and probably still the case today) far less than a piglet. Another version of this history involves the dishonest businessman physically switching the piglet for a cat while the customer turned away. Either way, it ended with letting the cat out of the bag and the secret being revealed that the customer didn’t have a piglet.

Obviously this explanation of the origin of the idiom seems rather implausible. For one, piglets tend to be a lot heavier than even the fattest of cats. To quote Matt Soniak of MentalFloss, “I have a cat fat enough to have earned the name “Oink,” and even he looks svelte next to a suckling pig.” Additionally, pigs squeal and oink, while cats hiss, meow, and claw. It would be pretty hard for even the stupidest of buyers to mistake a pig for a cat.

The Spanish equivalent of this phrase giving a potential origin is slightly more plausible, but still a stretch. “Dar gato por liebre” more or less means “to give a cat for a hare.” Hares were commonly eaten during the 14th and 15th centuries. At least in terms of size, a cat and a rabbit are more similar to one another than pigs and cats. To pull the switcharoo with a rabbit for a feral cat at least seems plausible. Then again, the whole hissing and clawing thing would still be a dead give away, so color me skeptical.

Another possible explanation for the origin of this phrase, this one at least somewhat plausible, stems from Britain’s infamous Royal Navy. Sailors would often get in trouble with their superiors. In order to keep these salty seamen in line, the Royal Navy would employ the help of a cat o’ nine tails, a whip with nine knotted cotton cords that could inflict pretty serious damage onto one’s back. The “cat,” or sometimes referred to by it’s other nickname “the captain’s daughter,” was often kept in a red cloth bag, as a symbolic gesture, as well as keeping it from drying out due to the sea air.

When a sailor didn’t perform their duty or when their behavior got out of a line, the captain would order that that they be trotted out in front of the entire ship and beaten with the whip. The boatswain’s mate, the one in charge of directing and supervising the crew, would be the one who was to do the flogging. As USS Constitution Museum in Charlestown, Massachusetts delicately states, “he would take the cat out of the bag in front of the assembled crew and there would be no secret about what would happen next.”

This theory at least somewhat holds water due to the fact that the first documented reference to this cat o’nine tails first showed up in 1695, prior to “letting the cat out of the bag” making its first documented appearance in 1760. The first reference to the former can be found in William Congreve’s 1695 play “Love by Love” where a character warns another by saying, “But I tell you one thing, if you should give such language at sea, you’d have a Cat O’Nine-tails laid crofs your shoulder.”

The one slight problem with that origin theory is that it doesn’t really show how we got from that to something not being able to be put back in a bag afterwards, which is central to the way the expression was used when it first popped up, and even today.  You could say the cat o’nine-tails doesn’t go back in until a whipping has been administered, but it still goes back in the bag easy enough.  It’s possible that the meaning simply morphed over the course of the early 18th century to when the first documented instances of “let the cat out of the bag” popped up, but there is no documented evidence of this evolution, so we can’t know for sure.

As you can tell, there seems to be little consensus on the origin of the idiom. In the end, the most likely explanation could simply be that it derived from a slightly more literal origin with no connection to trickery or metaphors; after all, it really is amazingly difficult to force a cat back into a bag they were trapped in after you let the animal out, as Will Rogers observed.