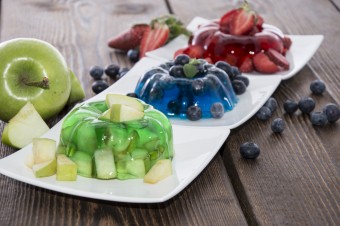 For over a century, Jell-O has been a part of American culture and, according to a 1904 edition of the Ladies Home Journal, “America’s Favorite Dessert” (conveniently enough named such in an advertisement paid for by Jell-O before anyone was really buying it all). That said, ever since then it really has been one of the most popular deserts in America. The story of this fruit-flavored, gelatin-based icon includes good old-fashioned American ingenuity, brilliant marketing, and a wobbly start.

Gelatin, the main ingredient in Jell-O, has been an after dinner delicacy for the wealthy dating all the way back to at least the 15th century. The tasteless, odorless protein is made by extracting collagen, found in connective animal tissues, from boiled bones of animals (usually from cows and pigs). It was (and still is) a time-consuming task to make gelatin. During the Victorian age, gelatin was extracted by boiling cow or pig hooves in a giant kettle for several hours. Next, the liquid would be strained and the bones discarded. The liquid was then left out for a day, give or take, to settle. After skimming the fat off the top, flavoring was added and, voila, a gelatin dessert was born!

By the early the 19th century, the dessert wasn’t just popular with well-to-do Europeans, but Americans as well. Thomas Jefferson was known to serve gelatin desserts at official banquets in his Monticello, Virginia home. In the mid-19th century, gelatin was so in-demand that there was a need to make the creation of it easier. Who wanted to take the time to boil cow hooves each time you wanted a gelatin mold at the dinner table?

So, in 1845, the already famous inventor of the first American-built steam locomotive – the Tom Thumb – Peter Cooper, devised a way to make gelatin more accessible by making large sheets of it and grinding it into a powder. He applied for and was granted a patent (US Patent 4084) for a gelatin dessert powder he called “Portable Gelatin” requiring only the addition of hot water. Despite the future economic windfall a gelatin powder would provide, Cooper didn’t market it nor did much of anything with his invention. He sold the powder to cooks on occasion, but never commercialized it beyond that. In fact, he was more interested in the production of powdered glue. He never quite figured out that secret. Unlike Jell-O, as most kids find out early in life, glue doesn’t taste very good.

About thirty miles outside of Rochester, New York, in the small town of Leroy, lived the married couple of Pearl and May Wait. They ran a rather unsuccessful cough syrup and laxative business. After years of this and barely scraping by, they decided one day to branch out into something that they knew better, food. May cooked all the time and loved to make desserts. So, according to the Chemical Heritage Foundation, after looking around for what to work on, they found and obtained the patent for powdered gelatin.

Of course, the main drawback of gelatin is its lack of taste. They found a fix for that by combining it with something else they knew a fair bit about- making syrups. Thus, they added a significant amount of sugary fruit syrups, using strawberry, raspberry, lemon, and orange for flavoring. Their product was now 88 percent sugar, but none of that mattered because now gelatin actually tasted good!

May named her and her husband’s new favorite dessert “Jell-O,” a combined version of the words gelatin and jelly (with both words deriving from the Latin “gelare” meaning “to congeal” or “to freeze”).  As for the “O” part, around this time in America it was simply a relatively popular trend to add “O” to the end of your product name. According to The Dictionary of Trade Names Origins, the practice got started simply because “O” is pleasing to the eye.  In addition, it allows a business to take a common word and easily modify it to make it easy to trademark, another example of which from that era was “Grain-O.”

Unfortunately, while Pearl and May were good at making Jell-O, they lacked the capital and experience to market their product. On September 8, 1899, the couple sold the formula, patent, and the name Jell-O to their Leroy neighbor, Orator Frank Woodward, owner of the Genesee Food Company, for $450 (about $12,000 today).

Already a successful packaged food businessman, Woodward knew how to sell a product. He dressed his salesmen in fancy suits and had them offer free samples to homemakers. They employed every trick in the book to get grocers to stock their shelves with boxes of Jell-O, still in the Waits’ original flavors, strawberry, raspberry, lemon, and orange. Despite all of this, sales still sagged. At one point, a frustrated Woodward offered to sell the product line to another Leroy townsmen for a mere $35. Luckily, for him, that person refused the offer.

In 1904, everything changed. With the help of the newly hired William E. Humelbaugh, Woodward decided to take some of the money he earned from the more successful products he made, including one that held a “miraculous power to kill lice on hens,” and invest it into ads for Jell-O in the national syndicated Ladies Home Journal.

Woodward began printing recipe books telling homemakers how to properly prepare their Jell-O. They handed out free Jell-O molds to immigrants arriving into Ellis Island. They introduced Jell-O girl, played by four year old Elizabeth King – the daughter of a brilliant ad artist, Franklin King, who Woodward had working for him. With a tea kettle in one hand and a packet of Jell-O in the other, she declared to the world that, “You can’t be a kid without it.”

Due to brilliant marketing, Jell-O became one of the most well-known brands in American history. In 1924, understanding the power of a name, the Genesee Pure Foods Company became, quite simply, the Jell-O Company. That same year, the company hired the soon-to-be-famous Norman Rockwell to draw colorful illustrations depicting Jell-O. He did just that, depicting a young girl serving a Jell-O to her doll at tea time.

With radio rising in prominence, Jell-O became one of the first companies to advertise on the new medium with Jack Benny singing to the whole world in 1934 their new jingle created by ad agency Young & Rubicam -“J-E-L-L-O.”

By the mid-1970s, formerly strong and steady sales of Jell-O (including their pudding line) began declining, so they hired the 37 year old comedian Bill Cosby to be their spokesperson. It worked and Cosby brought Jell-O to new heights. The Cosby/Jell-O relationship lasted for over thirty years and is considered, according Mary Cross’s book A Century of American Icons, the longest-standing celebrity endorsement in American advertising history.

In 1964, the plant in LeRoy, New York closed when the conglomerate General Foods (now Kraft Foods) took over production. But Jell-O is still represented in that small town with the Jell-O Gallery, a museum dedicated to all things Jell-O.