An Itsy Bitsy Teeny Weeny History of the Bikini 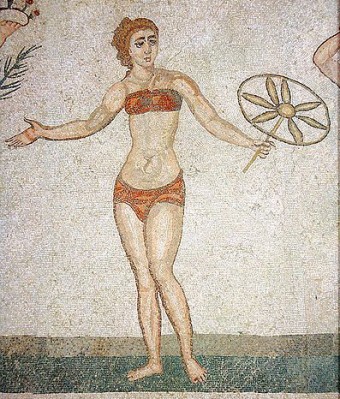 The modern bikini has a relatively short history only spanning a little over a half century or so, but bikini-like suits have been around and worn commonly for certain activities since at least the times of the Greco-Romans.  In fact, the first known instance of any type of bikini goes back even further to around 5600 BC with a surviving depiction of woman/goddess of Çatalhöyük astride two leopards wearing the garb.

Archeological evidence uncovered in Pompeii shows Venus, the goddess of love and beauty, also clad in bikini-like garb. And this is just one example of many found throughout the region of Venus dressed in attire very similar to a bikini on both wall paintings and mosaics. 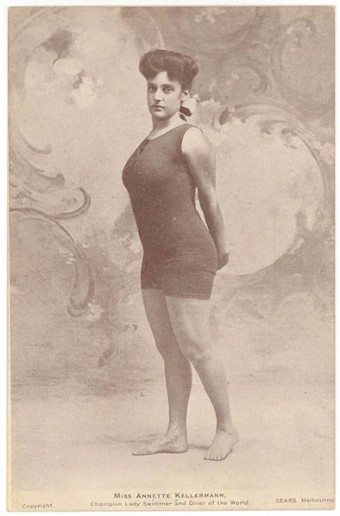 Annette Kellerman’s one-piece swimsuit that got her arrested

As far as the modern bikini goes, the first steps in its evolution began on a Boston beach in 1907. One must remember that Boston was considerably more prudish than ancient Rome was, and Australian swimmer Annette Kellerman didn’t even have to don a bikini to land herself in the pokey – a tight one-piece was more than enough to freak out the puritanical Bostonians who promptly put her in the clink for her scandalous attire. Though a mere three years later, this type of swimming attire was perfectly acceptable beach wear.

In 1913, when women were first allowed into Olympic swimming competitions, designer Carl Janzten constructed the very first functional two-piece swimwear; form-fitting shorts and a short-sleeved top. When the 1930s rolled around, the necklines had plunged at the back, and the sleeves and sides of the suits had disappeared. Hollywood played a huge part in playing up the glamour factor, and used Esther Williams in a series of films such as “Neptune’s Daughter,” where she spent as much time in the water dressed in provocative swimsuits as out of it “acting”.

With the invention of new materials like nylon and latex, around 1934 bathing suits became more form-fitting and began to have shoulder straps that could be raised or lowered for tanning purposes.

By the start of the 1940s, two-piece swimsuits were already a fairly common sight on American beaches. Hollywood pin-up girls such as Ava Gardner, Rita Hayworth and Lana Turner were photographed with stunning regularity wearing this type of bathing suit, and these photos were famously hung in military barracks the world over.

Then came the summer of 1946, when two men, engineer Louis Reard and designer Jacques Heim, invented and launched their own two-piece swimsuits practically at the same time. Heim was a swimsuit designer by trade who fashioned this two-piece specifically to be sold at his shop in Cannes, France. He christened his creation the “Atome,” in reference to its diminutive size. To advertise his newest fashion innovation, he hired sky writers to plug his scandalously tiny swimming attire.

Meanwhile in Paris, Louis Reard, inspired by women he saw rolling up their bathing suits so they could get a better tan, was creating his own two-piece bathing suit that he called the “bikini.” He named the suit such as he felt its impact would be on a par with the experimental atom bombs being set off near the Bikini Reef in the South Pacific. Reard marketed the bikini as the “smallest swimsuit in the world,” and a quick check among your friends as to whether they call a two-piece a “bikini” or “atome” should be enough to settle the question of whose tiny product rose to prominence.

The modern bikini was officially introduced into the world of fashion on July 5, 1946, when a nude dancer by trade, Micheline Bernardini, (the only woman Reard could find to model it) strutted her stuff down a Paris poolside runway. Several American fashion reporters present expressed mild shock at the model’s skimpy swimwear, stating it may be fine for French women, but American girls would never go for such a trashy look. A year later, the bikini would make its American debut.

Initial sales of the bikini were sluggish. There were many in the U.S. that found the revealing nature of the bikini shocking and immoral, and in some cities wearing a bikini in public was even illegal.

Then along came the sexual revolution of the ‘60’s and ‘70’s, and the popularity of the bikini bathing suit exploded and became an important part of pop culture. Who can forget Goldie Hawn dancing on Laugh In wearing nothing but a tiny bikini and body paint? As society’s attitudes towards sex became more relaxed, bikinis got smaller and smaller as the decades passed, and by the early 1980s bikini bottoms that rode very low on the hips with mere string ties became the fashion. Since then, even skimpier bikinis have become relatively common, occasionally just strings with tiny patches to cover the most scandalous of bits, continuing to push the envelope of what is acceptable for women to wear in public.  Some have even opted for patches of material without the strings, but at that point, can we really call it a bikini anymore? 😉