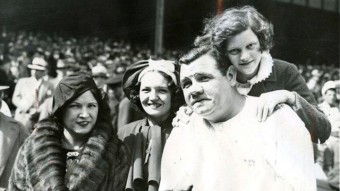 A former teammate of Babe Ruth’s once recalled the Bambino by saying, “You’ve got to remember, this guy wasn’t born. He fell out of a tree.” Ruth grabbed life by the throat (or maybe it was another part of life’s anatomy) and shook it up… frequently.

Ruth spent a good portion of his youth cooped up in St. Mary’s industrial school, listed as an “incorrigible”. After he was released, Ruth seemed to spend the rest of his life “making up for lost time.” He went through women like they were Lay’s Potato Chips

Most men, even the greatest ladies’ men, have particular “favorite types” of women, subjective turn-ons, and particular traits they especially like in the opposite sex. Ruth seemed unusual in his complete lack of this quality. Ruth just simply loved women- tall women, short ones, fat ones, thin ones, beautiful knockouts, ugly rejects, socialites, film starlets, secretaries, other men’s wives, and hookers. If the individual was a woman, he was interested.

According to his teammates, it was an extremely rare day that passed during his baseball career (1914-1935) that he did not find some lady to become “friendly” with. He liked women as much as baseball. And during his career, women constantly threw themselves at him. This worked out for his teammates too, as there were more than even he could handle, and most were happy to go with the backup options. (You have to remember, even early in his career when he wasn’t “The Great Bambino”, he wasn’t the tubby ballplayer most of us remember today.  He was quite the physical specimen early on and very tall for his era.)

Ruth was crazy about prostitutes and loved frequenting brothels. Prostitutes, unlike most women who threw themselves at him, wanted nothing but money and were much less complicated for the star. Often during his career, St. Louis fans would be “touched” by the Babe as he would say he frequented “The House of the Good Shepherd.” Most assumed, given he was Catholic, he was going to church. Little did they know, “The House of the Good Shepherd” was a brothel in St. Louis.

According to one of Ruth’s roommates early in his career, Ping Bodie, two nights in a row Ruth managed to go through “all the girls” at one Philadelphia brothel… Most such brothels at that time had around a dozen women on staff at any given time. There are numerous similar stories from other teammates that paint the same picture of Ruth’s libido, which even if exaggerated a bit, seem to make it a miracle he had energy left to play baseball.

Of course, anyone who lives this type of a lifestyle is bound to upset a few people, especially in the era he lived in. All this carnal activity had it’s inevitable casualties. Once, sports writers were chatting on a train in 1921 when they were amused to see the Babe running like mad through the club car, with a furious woman chasing him brandishing a knife. It was later discovered that the woman, who was married, had thought she was the “only one” and that he was in-love with her. When she found out the truth, out came the knife. In a similar story, but with an angry husband in Detroit this time, reporters were treated to the sight of a nearly naked Ruth chased out of a hotel room he’d been sharing with the man’s wife. The man brought a gun, but lucky for Ruth, chose not to shoot him, but simply give him a scare.

In a case that, for a time, looked extremely bleak for the Bambino, late in 1922, Ruth was slapped with a “breach-of-promise” suit for $50,000 (about $677,000 today), filed on behalf of Dolores Dixon, a teenage employee at a Manhattan department store. She claimed she had become pregnant by Ruth. She said he had raped her and later promised to marry her. She also claimed they’d met numerous times for liaisons in his car. The matter went to trial in 1923.

Ruth claimed he’d never seen the girl in his life. Given the number of women he’d slept with, perhaps this wasn’t a strong indicator that he’d actually not done what the girl said. While she was a teen (19) and technically underage in the area she lived (21 was the age of consent at the time there), few of that era cared about her age. What the public wanted to know was whether he’d actually sexually assaulted her and whether the child was his.

Long story short, nope and nope. In fact, there was no Dolores Dixon. It was a made up name. “Dixon’s” lawyer later admitted they’d hoped the Babe would settle out of court to keep the story out of the public eye. Ruth called their bluff and took them to court, at which point it became apparent the girl and her lawyer’s story was all made up and that she was simply desperate for money and was inspired by Ruth’s reputation as a playboy to make up a story and extort some money from him. Given his tendencies, she might have pulled it off had she simply written to him and hooked up with him a few times as she said in her story.

While he hadn’t committed the despicable acts “Dixon” accused him of, his behavior was deplorable for another reason- during his peak womanizing years, he had a wife whom he sorely neglected.

Ruth went through life like a cyclone, but of all the people he touched, possibly none was hurt as much as his first wife. Helen Woodford was an auburn-haired Texas girl, sweet and quite pretty.  She was a waitress in a Boston cafe where Ruth met and fell in love with her, or perhaps just in-lust. By all accounts, she was extremely shy and a very innocent girl, perhaps appealing to him because, unlike so many other women, she wasn’t throwing herself at him.

Whatever the case, they were married in a Catholic church in 1914; Ruth was 2o and she was 17. Throughout their 14 years of marriage, poor Helen’s life with Ruth was pure hell. He gave her furs, an 80-acre farm and an adopted daughter named Dorothy (who was Ruth’s child through one of his affairs, this one to Juanita Jennings, though Helen reportedly did not know the child was really his); he gave her neither time, love, nor fidelity.

His countless affairs with other women caused her to have a nervous breakdown. She finally left Ruth in 1928 and the following year- while living with a dentist in Watertown, Mass- she died in a mysterious house fire. At the time, they were still married as, being Catholic, they couldn’t get divorced. Affairs, at least as far as Ruth was concerned, apparently didn’t conflict with his religion. Divorce, though… oh the scandal.

Three months later, Ruth married ex-chorus girl Claire Merritt Hodgson. She was classy, well-off, extremely strong-minded and a great beauty who had a liking for ballplayers. (Ty Cobb stated that he dated Hodgson before Ruth and that things had gotten serious for a time.)

She was one of the women Ruth were having an affair with when Helen was alive.

He married Claire in 1929 and she did the impossible, taming him and managing to change his entire lifestyle. She put him on a strict diet and curbed his drinking. She saved his money and forced a ten o’clock curfew on him when he went to parties.  Most remarkable of all, he mostly did what she said.

Claire knew all about the Babe’s other women and this reckless habit too was finally, mostly, curbed. For a time, she even traveled with him while he was on the road to make sure he stuck to her rules. After a while, she got tired of all the travel, though, and decided Ruth occasionally doing things he shouldn’t was a fair trade for getting to spend more time with her family and friends back home. While he didn’t go back to the extreme playboy ways he’d exhibited before, while on the road at this point, he had the occasional affair. At home, he was generally a dutiful husband. Apparently the situation worked for them.

Claire was very possibly the one and only woman Ruth ever met who he actually respected and, to the end, their 19-year marriage was by all accounts a relatively happy one.

Babe Ruth died on August 16, 1948.  Millions of baseball fans mourned his death- and so did countless women who cared nothing about baseball whatsoever. Although, from accounts of more than a few broken hearts he left along the way, there were probably a few who secretly rejoiced.