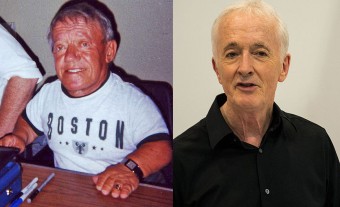 In 1975, George Lucas was casting for his upcoming sci-fi film The Star Wars (name later changed to simply Star Wars).  After a joint casting session with Brian De Palma, who was looking to hire actors for his new horror movie Carrie, Lucas was able to cast many of his principal actors. He decided on two young no-names, Carrie Fisher and Mark Hamill, as well as a friend from his previous film, American Graffiti, Harrison Ford, to portray the three main characters; Princess Leia, Luke Skywalker, and Han Solo.  But these were the easy casting choices, the characters whom there weren’t any special physical traits needed. For two other main characters, R2-D2 and C-3P0, Lucas decided to go to London to see if he would have any luck finding actors who would fit the unique criteria of these roles.

Anthony Daniels had never been a science fiction fan. In fact, the only science fiction movie he had ever seen was Kubrick’s 2001: A Space Odyssey. He was so dissatisfied that he walked out ten minutes into the movie and demanded his money back. As a classical actor in London, he was used to the stage, portraying a Shakespearean actor or a melodramatic English nobleman. His parents had wanted him to be a lawyer, but when Anthony told them about his desire to act, it created quite a rift in the Daniels family.

When the opportunity presented itself to audition in London for George Lucas to be in his upcoming space epic, The Star Wars, Daniels was not immediately on board. He didn’t know much about Lucas and he wanted to be a “serious actor.” But then Daniels was presented with the concept drawings by Ralph McQuarrie of his soon-to-be iconic robot, C-3PO. Strongly influenced by the Maschinenmensch from Fritz Lang’s classic sci-fi film Metropolis, Daniels was blown away by the emotion and controlled expression of the character. He “fell in love with the look of the character” and after reading the script, Daniels decided he must play C-3PO.

Convincing Lucas to hire him, though, was a challenge. Lucas originally believed that C-3PO should talk like a “sort of a used-car dealer, a fast-talking guy with an American accent.” Lucas soon realized that an English accent, like the one possessed by Daniels, accompanied C-3PO’s constant “eyebrow-raised” skepticism perfectly. Lucas had found the man inside of the gold robot that would help the Jedi save the Star Wars universe.

Kenny Baker was skeptical when he was asked to come in to 20th Century Fox Studios to meet with a young director by the name of George Lucas. He had formed a comedy partnership with another actor, Jack Purvis, and the two were doing quite well together. Both Baker and Purvis were actors who had “short stature” and called themselves the “Mini Tones”. They had been together for over ten years and their careers were beginning to rise. They had just become regularly performers on the English variety show “Opportunity Knocks” with Hughie Green.

Starting out as a circus performer, Baker was excited that he was being appreciated for his acting and comedy chops, and not just his (lack of) height. So, when Baker walked into the audition, he was expecting to turn down the role. But George Lucas needed him to play the droid R2-D2. Standing as an adult at three foot, eight inches (1.12 meters), Baker was short enough to fit into the robot and strong enough to operate the heavy machinery that a child would have not been able to do. Despite spending all day looking at actors, Lucas had found no one who was like Baker. He was the smallest man to audition for the role.

Due to Baker’s initial hesitation, Lucas told him to name his price. So, Baker asked for £800 a week (about £4,880 today or $7,810), or approximately the amount he would make performing with Purvis. Lucas quickly accepted. Needless to say, Baker stated that he regrets not asking for more money.

Both Daniels and Baker don’t have particularly fond memories of shooting Star Wars.  Due to the clunky nature of their suits, they had a hard time reacting and interacting with their fellow actors on set. They had difficulty performing simple movements, like walking up stairs and even breathing correctly. Plus, it was unbearably hot in the suits, especially when they shot in North Africa and the temperature reached nearly 105 degrees Fahrenheit (40.55 degrees Celsius).

While both appreciate the money, fame, and fan devotion that has come with playing such iconic characters, it’s sometimes been tough to be Luke Skywalker’s favorite droids. Said Baker during an interview in the mid 2000’s, “there weren’t any highlights (being R2-D2); I was just there, in the droid. I can’t remember any highs or lows, it was just a job.”

In a 1995 interview, Daniels explained how it felt to have the suit put on him,

During the first few days, it would take half an hour just to line-up the three screws that kept the two parts of the head together. You can imagine what it felt, and sounded like, for me. It was just like being inside a Rubik’s cube with people on the outside arguing over the instructions.

Despite being the only two actors to appear in the six first Star Wars films and forever tied together in pop culture lore, it has been well-documented that Daniels and Baker never really got along. In a 2009 interview, Baker said that he originally thought it was just him that Daniels didn’t like, but “he doesn’t get along with anyone.”

Plus, Baker said he once approached Daniels about touring as their characters to make money and “he looked down his nose at me like I was a piece of sh*t. He said: ‘I don’t do many of these conventions – go away little man.’ He really degraded me and made me feel small.”

While the film may show an unbreakable friendship, they hardly talked to each other during filming. Said Baker again, “We were both in our droids; there was no interconnection at all. We couldn’t hear or see each other.”

As Disney was ramping up production on the new set of Star Wars films, both Daniels and Baker expressed interest in reprising their roles. Daniels did indeed continue to portray C-3PO in the 2015 Force Awakens and in the 2017 Episode VIII. As for Baker, he was originally going to reprise is role as R2-D2, but for unspecified reasons did not, and instead simply was listed as a “consultant.” It is possible his health, which has been in decline for a few years, may have been the culprit.  He ultimately died on August 13, 2016 at the age of 81.  Actor Jimmy Vee has taken over the role for the upcoming Episode VIII.