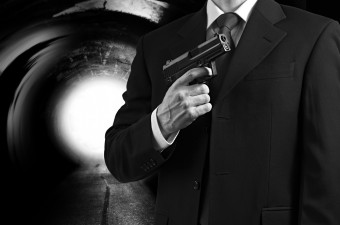 Today I found out the man who gave the world one of the most enduring fictional characters of all time, James Bond, also wrote Chitty Chitty Bang Bang.

The man was Ian Fleming. Born May 28, 1908 to a wealthy family in London, he and his three brothers were educated at Eton College, the same school Princes William and Harry attended. Fleming was supposedly a master of athletics. After Eton, he attended Sandhurst and chose to study in Munich and Geneva, where he had the Alps as a backdrop. He would later learn to ski and climb the mountains, perhaps not surprising given his athletic history, which would also set the stage for some of his yet-to-be-conceived character in the James Bond books.

Fleming jumped from career to career almost as often as he switched girlfriends. He was known to be a “womaniser,” not that the ladies seemed to mind—apparently they thought him very attractive. In this way, he didn’t differ much from Bond himself.  He first tried to establish himself in the military, followed by an attempt to become a foreign diplomat—both were unsuccessful.

He later enjoyed a stint working for Reuters, where he learned basic journalism skills and covered a case about a Russian spy. However, he knew there wasn’t a lot of money to be had in journalism—at least not for him—and he decided to pursue a career as a stockbroker.

However, the world was fast approaching World War II.  Despite the fact that his father had died while serving in World War I when Fleming was just nine, it didn’t deter him from entering the war effort when World War II broke out.

He started out as a Lieutenant Commander RNVR in Naval Intelligence, gathering information that helped the smooth-running of the Allied war effort. He later became the personal assistant to the director.

His work took him on many overseas visits, notably to the United States where he had a hand in the establishment of what would become the CIA. Specifically, while on a trip to D.C., Fleming worked with a group to come up with a blueprint for the Office of the Coordinator of Intelligence—a department that eventually evolved into the CIA.

Much of what Fleming learned during his time with Naval Intelligence likely helped to shape the Bond books, though Fleming was never able to speak openly about his work because he signed the Official Secrets Act. However, it is thought that his director, Admiral John Godfrey, was the inspiration for the character M. In Diamonds are Forever, published in 1956, where he wrote, “There was a creak from M’s chair and Bond looked across the table at the man who held a great deal of his affection and all his loyalty and obedience.”

After the war, Fleming had taken up a job as the Foreign Manager of The Sunday Times, but he started talking about wanting to write “the spy novel to end all spy novels.” No doubt after his experiences during the war, in which he liaised with spies but never truly became one, he had quite a lot of fodder waiting to be turned into a book. Before any writing could be accomplished, however, Fleming decided to get his life in order.

First, he negotiated a contract with his employers that allowed him three months off a year. Then, he started building a house in Jamaica. He’d fallen in love with the country when he visited during a naval intelligence meeting and vowed to return someday. Naming his house Goldeneye, after a mission during the war, he settled in to write.

Some say that he started writing the novels to impress his soon-to-be wife, Ann, Lady Rothermere. He had been having an affair with Ann for several years. After she became pregnant with their second child (the first was stillborn) she divorced her husband and joined Fleming in Jamaica. But Ann had surrounded herself with writers in London, and perhaps he thought publishing a book would allow him into that circle.

Whatever the case, the first James Bond novel, Casino Royale, was published in 1953. It was written in just two months while Fleming was on “vacation” in Jamaica, a trend he continued for subsequent books. He kept on working for The Sunday Times until 1959, using his three months’ vacation to write.

The job was actually pretty useful for his book writing career: it allowed him to connect with people from all over the world, so he was able to check facts about geography, history, and culture with people who lived in the areas he was writing if he was not able to visit himself. This, along with his tendency to include brands of items in his books, added a level of realism to his stories.

For the most part, the popularity of the books rose steadily, though they received a few big surges as well. First, President John F. Kennedy cited From Russia With Love as one of his favourite reads, resulting in sales rising sharply in the United States. (Incidentally, he actually met President Kennedy and the First Lady in Washington, D.C. and reported that it was one of his favourite fan encounters.)

Secondly, the first James Bond movie—Dr. No—was released in 1962, starring the talented Sean Connery as Bond. Fleming would also live to see From Russia With Love made into a hit film, as well as some of the filming of Goldfinger. Many more Bond films have since been created, of course, with a range of actors playing the title character including, most recently, Daniel Craig.

But Fleming wouldn’t live to see exactly how huge his books—and subsequent movies—would become. He was suffering from heart disease and had his first heart attack in 1962.

Told not to work during his recovery, he started writing a book on the sly for his only son, Caspar, who was ten at the time. Was this his next great Bond book or perhaps some sort of “James Bond Jr.” novel geared for a younger audience?  Nope. The adventuresome novel was a fantastical tale about a flying car: Chitty Chitty Bang Bang. This book would, of course, go on to be made into a movie that would become a family classic, but Fleming was never able to see it for himself.

Ian Fleming died on his son’s twelfth birthday—August 12, 1964—after suffering from many different health issues. Needless to say, that was quite the traumatic experience for a boy to suffer at such a young age, and Caspar was plagued by mental health issues in his teen years until he committed suicide in 1975 at the age of 23.

Nevertheless, Fleming’s legacy lives on. His Bond books as well as Chitty Chitty Bang Bang have never left print. Fleming proved to be a talented writer whose books were able to stand the test of time with great descriptions, interesting characters, and an engaging plot. In an article about how to write a thriller, Fleming said it was easy:

There is only one recipe for a best seller. You have to get the reader to turn over the page.

And that’s just what he did.