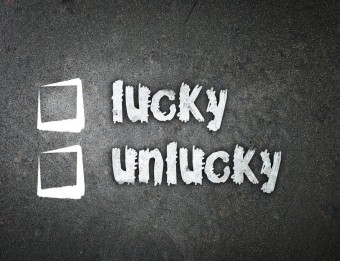 Depending on how you look at it, Frane Selak, a now 85 year old retired music teacher from Croatia, is either the luckiest, or unluckiest man in the world, having lived a life that resembles the plot to Final Destination; except after cheating death seven times, rather than be killed by a falling sign, he won £600,000 in the lotto in 2005.

His first brush with death was while traveling from Sarajevo to Dubrovnik in 1962 on a train. During the trip, the train jumped the tracks and ended up in the river, which at the time was icy cold.

Despite the situation, Selak suffered only a broken arm, and managed to swim to shore, though thanks to the cold, he also had hypothermia when emergency personnel showed up. But this was much better than what happened to the seventeen people who drowned in that incident.

In 1963, Selak took his first and only plane trip; no doubt not being a fan of trains at this point.  During the flight, a door in the plane burst open. Selak was thrown from the aircraft and found himself skydiving without a parachute.

Miraculously, he landed safely on a large haystack, though was unconscious when emergency personnel found him. He woke up in a hospital with only minor injuries. Other passengers were not so lucky. The open door caused the plane to crash, killing the other 19 aboard.

Three years later, a bus he was on went over an embankment into a river, drowning four.  Being no stranger to this sort of sudden plunge into a river while on some form of mass-transportation, once again, Selak was able to swim to safety, this time suffering only cuts and bruises.

Selak was now given a four year respite from Death messing with him, but all good things must come to an end. Despite obvious signs that he should barricade himself in his home and invent a line of bubblewrap clothing, having nearly died aboard a train, a plane, and a bus, Selak decided it would be a good idea to drive around in his car. Unfortunately, his car caught fire as he was driving. He jumped out and ran away from the car, getting away just shortly before the car was engulfed in flames, followed by the gas tank exploding.

Rather than switch to simply riding bikes, he got a different car and decided to risk automobile travel once again… mistake.  Fire once again claimed one of his cars three years later, when a defective fuel pump sprayed gasoline over the hot engine. The resulting flames that suddenly shot through the air vents burned off most of Selak’s hair and caused him a couple other burns, but that was the extent of his injuries.

Selak must have been lulled into a false sense of security because it was over twenty years before his next near-death experience happened. No doubt deciding walking was the best way to safely get around, Selak was doing just that in Zagreb when he was hit by a bus… He was knocked down and (say it with me) only walked away with minor injuries.

At this point, in 1996, Selak must have considered himself invincible, so he thought it would be safe to take a drive through the mountains… Mountains!  This is just a near death experience waiting to happen. And, indeed, that’s what occurred.

He came around a corner, only to see a large truck coming straight for him. With nowhere else to go to avoid a head-on collision, he crashed through a barrier to a 300 foot cliff. (Technically, I think this should count as two near death experiences, but that’s just me.)

Besides the extra lives, Selak apparently also has reflexes like a cat because, as his car was in the process of going over the cliff, he was able to leap clear and grab onto a tree overhanging the cliff, James Bond style. From there, he had a great view of his car smashing into the ground at the bottom of the cliff.

At this point, Death apparently having had his fun, apparently decided to throw Selak a bone. In 2003, Selak, who people had been telling for decades was “extremely lucky”, despite the fact that he felt the opposite (particularly having also been married five times in his life up to this point- with him saying of the first four, “I guess all the earlier marriages were disasters too”), purchased a lotto ticket.

Of course, he won- a jackpot of £600,000 (nearly $1 million).  Having been married four times before, he decided to try for lucky number 5, proposing to his girlfriend.  She accepted.

Five years later, at the age of 81, he started giving away what he hadn’t spent of the million dollars to family and friends, as well as selling his home on a private island, and moving back to his old home south of Zagreb in the Republic of Croatia, where he lived prior to winning the lottery. He said he had everything he needed to keep him happy and didn’t need the money anymore. He did, however, keep enough money to pay for a hip replacement surgery and to build a shrine to the Virgin Mary.

Also, let’s be honest, a private island for this guy isn’t probably the best idea.  Yes, the lack of mass transportation could be good for his safety, but you notice, besides bikes, what one major mode of transportation hasn’t yet resulted in a near death experience for him?  Boats.

While people nicknamed him “The Luckiest Man in the World,” for cheating death so many times and winning the lottery, Selak disagrees.

I never thought I was lucky to survive all my brushes with death. I thought I was unlucky to be in them in the first place but you can’t tell people what they don’t want to believe.

Selak has apparently changed his lifestyle to avoid further mishaps. He was asked several years ago to star in an Australian TV commercial for Doritos. While he initially accepted the job, he quickly changed his mind. Turns out he didn’t want to test his luck by flying to Sydney to film the commercial.  Fool me once, shame on you, and all that. 😉