The Bloody History of the Barber Pole 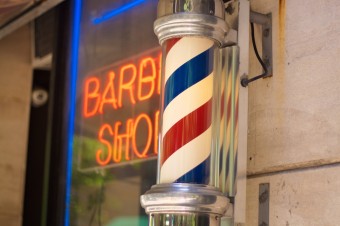 Red and white striped, sometimes with a bit of blue, a barber pole twisting next to a small storefront signifies a place where men can get a haircut, a shave and a bit of masculine bonhomie. But this was not always the case. Back in the day, the red and white we associate with good grooming used to represent blood, bandages, leeches and pain.

As long as people have been making razors, there have been barbers. In Egypt and other ancient cultures (as early as 3500 BC), barbers were often priests whose main job was to keep evil spirits from possessing people; they did this by trimming, styling and shaving off the hair through which demons liked to enter the body.

This role morphed into something that much more closely resembles a modern day barber by the time of the Greeks in the 5th century BC. Setting up in an agora, the Greek barber styled hair, trimmed beards and encouraged gossip. In Rome, barbers were known as tonsores, and many well-groomed Romans made a stop at their shops part of their daily routine.

Even in the somewhat misnamed “dark ages”, barbers were in demand. Many monks, like the Benedictines, embraced the tonsure, a hairstyle where the crown of the head is shaved with only a narrow ring of hair remaining. Barbers were employed to manage this grooming, and in addition, because of papal prohibitions, barbers were also responsible for conducting surgeries.

Historically, the Roman Catholic Church believed that surgery violated the Holy Spirit’s temple (the human body). In line with this, several meetings of the church, including the Councils of Tours of 1163 and 1179 and the Fourth Lateran Council of 1215, decreed that priests and monks, who had a long history of medical and surgical scholarship, were forbidden from performing surgeries. Although priests continued to conduct research and serve as physicians for the wealthy, they relied on the barbers for surgical procedures and bloodlettings.

In addition to the wealthy, barbers also helped regular people. Lancing boils, setting breaks and amputating gangrenous limbs were common procedures; so, too, was trepanning, a process by which a hole was drilled into a person’s head to let out the evil forces that caused mental illness and epilepsy.

Bladder obstructions were treated with catheters (sometimes inserted through an incision because the syphilis-wracked patient’s urethra was completely blocked), and kidney stones were removed with minor surgeries.

But perhaps the procedure most commonly associated with barbers in the middle ages was bloodletting. Using a narrow blade, the barber would open a vein and allow the blood to pour down into a small brass bowl; by way of advertising, many barbers would display these bowls of blood in their shop windows so people would know they performed the service.

During the procedure, the patient would grip a white rod to encourage blood flow, and white strips of bandage would be used to clean the patient. Dirty bandages were washed and hung to dry on the grasping rod outside of the shop.

For those wounds too tender or hard to reach, rather than lancing and bloodletting, the barber would apply special leeches, known as Hirudo medicinals, which emitted a natural anesthetic and anti-coagulant while it sucked blood. These healthy, hungry leeches were typically kept on hand in a separate brass bowl.

The famous pole is a study in semiotics. The white on the pole represents the bloodletting rod that was grasped by the patient during the procedure. The red stripes symbolize the bloodied bandages, often hung out to dry on the pole after they’d been cleaned as well as possible.

As for the rest, things get a little murkier. It’s is thought that the brass ball at the top may represent the bowl of leeches, while the brass at the bottom evokes the bowl that catches the blood. For those poles that have a blue stripe added, many believe this represents veins.

Of course, sometime in the middle ages, the profession of surgeon emerged, and afterward, surgeons and barbers competed for customers. To end the conflict, Parliament passed and King Henry VIII approved legislation that united both into the Barber-Surgeons’ Company in 1540.

Subsequent legislation was passed that further required barbers and surgeons to specialize and distinguish between the two groups by either having a red and white pole (surgeons) or one that was blue and white (barbers).  So from this, perhaps the blue simply originally represented traditional grooming services.

Whatever the case, despite the distinction, in the United States particularly, barbers still tend to use white and red in their poles (usually spinning) as well as blue. Rather than have its origins wholly in the original meaning of the color scheme, this is thought to have more to do with the fact that the U.S. flag is, of course, colored red, white, and blue.