Who Invented the Food Pyramid? 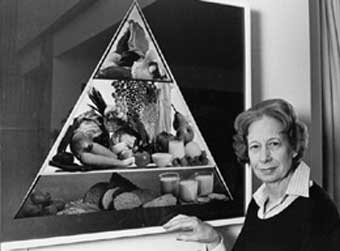 The very first “food pyramid” was a Swedish invention and it was an invention of necessity more than anything else. Back in 1970s, Sweden saw its country gripped by high food prices. The government then tasked The Socialstyrelsen (National Board of Health and Welfare) with coming up with a way to help the situation. In response to this, in 1972, they came up with “basic” and “supplementary” foods- in a nutshell basic foods were foods considered essential to a person’s well-being and supplementary foods were foods that provided vitamins and minerals basic foods did not.

However, it was one, Anna Britt Agnsäter, working for Kooperativa Förbundet (Swedish Co-operative Union- a retail/grocery co-operative), who really pushed the idea to the next level. Though the Socialstyrelsen’s basic foods idea was a good one, Anna felt that it could be improved upon and developed an idea of a triangular model to better visualize the portions.

The scheme was officially unveiled to the Swedish populace in Kooperativa Förbundet’s annual magazine,  under the headline “Good wholesome food at reasonable prices“. An important thing to note is that the Socialstyrelsen and by extension the Swedish government itself sought to distance itself from the pyramid in lieu of using a “dietary circle” model, not unlike one already used by the USDA (United States Department of Agriculture). This circular model, though useful for representing what foods were important, was criticized for not explicitly showing how much of each food type should be consumed, something the pyramid model did in a simple and visually striking way.

Now if you take a quick look at the original pyramid, you may notice that there are some stark differences with the more Westernized model you’re likely familiar with. There’s a reason for this beyond simply a more modern understanding of nutrition and health- pressure from lobbyists and heavy hitters in the food industry. You see, the food pyramid stood to be the go-to standard millions of Americans would base their entire diet around and billions of dollars were at stake.

For example, you may notice that in the earliest 1992 version in America, dairy gets its own section, whereas in the Swedish version it is simply bundled along with the other staple foods. This isn’t an accident and subconsciously this suggests that dairy is an essential part of one’s diet, which is obviously not true since many cultures throughout history got along perfectly fine without non-human milk, as do vegans and others today. If you are guessing that entities within the dairy industry lobbied hard for this modification, it’s generally thought that you’re correct.

You may also notice that the original American pyramid suggest 6-11 servings of bread, cereal, rice and pasta per day. Which is, well, a hell of a lot if you actually think about it. According to Luise Light, one of the people who worked for the USDA during the time the pyramid was being developed, this was due to interference from food industry giants as well. How does she know this? Well, she was the leader of a group of top nutritionists who developed the original food pyramid for the United States before it got “sold to the highest bidder” as she put it.

She goes on to state:

When our version of the Food Guide came back to us revised, we were shocked to find that it was vastly different from the one we had developed. As I later discovered, the wholesale changes made to the guide by the Office of the Secretary of Agriculture were calculated to win the acceptance of the food industry. For instance, the Ag Secretary’s office altered wording to emphasize processed foods over fresh and whole foods, to downplay lean meats and low-fat dairy choices because the meat and milk lobbies believed it’d hurt sales of full-fat products; it also hugely increased the servings of wheat and other grains to make the wheat growers happy. The meat lobby got the final word on the color of the saturated fat/cholesterol guideline which was changed from red to purple because meat producers worried that using red to signify “bad” fat would be linked to red meat in consumers’ minds.

Where we, the USDA nutritionists, called for a base of 5-9 servings of fresh fruits and vegetables a day, it was replaced with a paltry 2-3 servings (changed to 5-7 servings a couple of years later because an anti-cancer campaign by another government agency, the National Cancer Institute, forced the USDA to adopt the higher standard).

Our recommendation of 3-4 daily servings of whole-grain breads and cereals was changed to a whopping 6-11 servings forming the base of the Food Pyramid as a concession to the processed wheat and corn industries. Moreover, my nutritionist group had placed baked goods made with white flour — including crackers, sweets and other low-nutrient foods laden with sugars and fats — at the peak of the pyramid, recommending that they be eaten sparingly. To our alarm, in the “revised” Food Guide, they were now made part of the Pyramid’s base. And, in yet one more assault on dietary logic, changes were made to the wording of the dietary guidelines from “eat less” to “avoid too much,” giving a nod to the processed-food industry interests by not limiting highly profitable “fun foods” (junk foods by any other name) that might affect the bottom line of food companies.

Unsurprisingly, as noted in The Wall Street Journal, obesity rates have increased ever since the introduction of the food pyramid, aka the day millions of people suddenly thought eating eleventy billion slices of white bread per day was healthy. Now, correlation does not equal causation and it’s likely there are a lot of other factors in play here, but the Food Pyramid probably hasn’t helped.

Even if for some reason you don’t believe Luise and others who were involved and more or less make the same claims, the USDA has certainly made a lot of questionable decisions with regards to nutrition recommendations. When the pyramid was being revised in 1995, they were under pressure to alter the wording of the pyramid to say “eat less salt and sugar“. The sugar barons of the time fought this change and when the revised pyramid was released, it advised people to eat less salt, but “moderate” their sugar intake.

The funny part is that consuming excessive sugar regularly is most definitely bad for you.  But on the sodium side of things, the number one reason most, even sometimes doctors, say to maintain a low sodium diet- that high sodium = high blood pressure- is a myth. To date, there is no solid evidence that consuming excessive sodium raises blood pressure.  Further, there has been quite a bit of recent research not only debunking the “low sodium is good for you” myth, but also indicating that in cases with people with certain heart diseases, more salt may be better, rather than less as is often recommended to people with these conditions.  If you don’t want to take my word for it and don’t care to read the full details on the preceding link, in 2011, two Cochrane reviews found no evidence that low sodium diets improved peoples’ health. They concluded,

After more than 150 random clinical trials and 13 population studies without an obvious signal in favor of sodium reduction, another position could be to accept that such a signal may not exist.

Another major problem is the “fats” section. Unsaturated fats, which are lumped in with “fats” as being the least of the things you should have according to the USDA Food Pyramid, are not only essential for you to live but have been linked to lowering “bad” cholesterol, maintaining steady blood sugar, reducing your chance of heart disease, aiding in brain function, and have been shown to also aid in weight loss.  But from the USDA Food Pyramid- as well as a lot of fad diets- you’d think you should avoid this type of fat. (If you’re curious, good sources of unsaturated fats include avocados,  the name of which, incidentally comes from the Aztec for “testicle”; various nuts; olive oil; pesto and various types of seafood.)

So, in the end, the Western food pyramid is a lot like breasts. Everyone was happy with the all natural Swedish ones, right up until America filled them with chemicals and claimed it was better that way… 😉  Seriously though, if you build your core diet around eating lots of vegetables as well as moderate amounts of whole grains, lean proteins, fruits, and sources of unsaturated fats, all the while watching your overall caloric intake and exercising regularly, you’ll probably be in the ballpark of “healthy”. 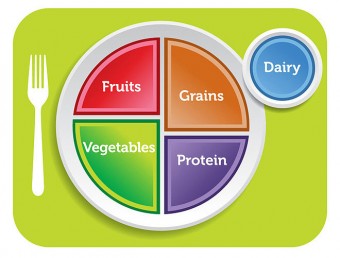 If you’re curious what a much better food pyramid than the USDA’s version- and better than the USDA’s more recent “MyPlate” that has replaced the “MyPyramid”- check out Harvard’s version from their Department of Nutrition.  Nothing’s perfect, but it’s pretty darn good and certainly beats the version created to pander to various major food industry groups.

(Editor’s Note: If you’re further looking for a non-gimmicky, healthy guide to the exercise part of the equation- as well as more detail on proper nutrition including a lot of “nutrition myth” debunking- Michael Matthews’ Thinner, Leaner, Stronger, The Shredded Chef, etc. are a good place to start.  As Karl said, nothing’s perfect particularly when it comes to nutrition guides, but I’ve read a few of Michael Matthew’s books, and they’re quite good on the whole and very easy, quick reads, with the content generally backed by a heck of a lot of properly interpreted scientific studies. He basically just teaches you in a no-BS way how to eat and exercise properly to maximize your full body health. There are a few minor points I think he’s a tad off on, such as the “sodium” bit, but on the whole, very good books and quite accurate for the most part.)