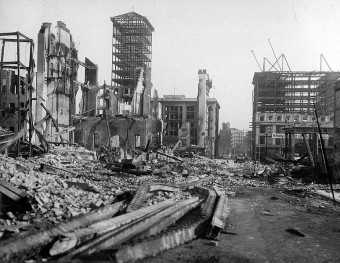 It was 5:12am, local time on April 18, 1906, when residents of the San Francisco Bay area in California experienced major shaking. 20-25 seconds later, they learned the hard way that that shaking was nothing compared to what they would experience for the next 45-60 seconds. The epicenter of the 7.7 – 8.25 quake was about 2 miles from the city of San Francisco, in Mussel Rock, but shaking was felt from Oregon to Los Angeles and as far inland as central Nevada. The first shaking was merely a foreshock to what was to go down as one of the worst natural disasters in the history of the United States alongside two hurricanes – the Galveston hurricane in 1900 and Hurricane Katrina in 2005.

According to earthquake survivor P. Barrett,

“[All] of a sudden we had found ourselves staggering and reeling.  It was as if the earth was slipping gently from under our feet.  Then came the sickening swaying of the earth that threw us flat upon our faces.  We struggled in the street.  We could not get on our feet.  Then it seemed as though my head were split with the roar that crashed into my ears.  Big buildings were crumbling as one might crush a biscuit in one’s hand.  Ahead of me a great cornice crushed a man as if he were a maggot – a laborer in overalls on his way to the Union Iron Works with a dinner pail on his arm.”

The earthquake was caused by a northward and southward rupture of 296 miles on the northern third of the San Andreas Fault. A major aftershock occurred at 8:14am, sending survivors into a panic and causing the collapse of already damaged buildings. At noon, two earthquakes occurred in Los Angeles about ten minutes apart just as large crowds were gathering around bulletin boards for the latest telegraphic dispatches from San Francisco. Thousands of people ran screaming in panic. Although San Francisco is the most famous city affected by the earthquake of 1906, several other cities suffered considerable damage including San Jose and Santa Rosa, whose entire downtown was essentially destroyed.

The actual earthquake itself was not all the residents of San Francisco had to survive. As a result of the earthquake, devastating fires broke out from ruptured gas mains throughout the city and burned for several days. The earthquake and fires combined:

The really funny part (or tragic, depending on how you want to look at it) is that it’s estimated that about 50% of the buildings that were destroyed wouldn’t have been except that firefighters were using dynamite to demolish certain buildings in an attempt to create firebreaks.   Aside from then destroying those buildings, this, unfortunately, resulted in new fires being started by the explosions, which then spread throughout the city.

In addition to that, one of the largest fires of the disaster was started accidentally by a woman making breakfast for her family, which came to be known as the “Ham and Eggs Fire”. It went on to destroy part of the Western Addition, the Mechanics’ Pavilion, City Hall and then jumped to Market Street at Ninth.

According to Jerome B. Clark, a businessman from Berkley who still made his trip into San Francisco that day,

“Fires were blazing in all directions, and all of the finest and best of the office and business buildings were either burning or surrounded.  They pumped water from the bay, but the fire was soon too far away from the water front to make efforts in this direction of much avail.  The water mains had been broken by the earthquake, and so there was no supply for the fire engines and they were helpless.  The only way out was to dynamite, and I saw some of the finest and most beautiful buildings in the city, new modern palaces, blown to atoms.  First they blew up one or two buildings at a time.  Finding that of no avail, they took half a block; that was no use; then they took a block; but in spite of them all the fire kept on spreading.”

“The most terrible thing I saw was the futile struggle of a policeman and others to rescue a man who was pinned down in burning wreckage.  The helpless man watched it in silence till the fire began burning his feet.  Then he screamed and begged to be killed.  The policeman took his name and address and shot him through the head.”

At the time of the disaster, San Francisco had been the ninth-largest city in the United States and the largest on the West Coast of the country. Over a period of 60 years, the city had established itself as the financial, trade and cultural center of the West, operating the busiest port on the West Coast, making it the “gateway to the Pacific”. Though San Francisco was rebuilt very quickly, with the quickness in part thanks to the efforts of the founder of Bank of Italy, which became Bank of America, A.P. Giannini, it was too late. (Incidentally the character of “George Bailey” on “It’s a Wonderful Life” was based off Giannini, who was a truly remarkable individual).

Directly after the earthquake happened in the very early hours of the morning, Giannini went and sifted through the rubble of his building and gathered $2 million into a garbage man’s wagon, owned by Giobatta Cepollina whose son would go on to work for Bank of America because of a promise made by Giannini to Cepollina in exchange for use of his wagon.  Cepollina’s son was able to retire from Bank of American at 41.  After gathering the money, Giannini then took it outside of town, covered in garbage to protect it from being stolen.

Next, he headed out to the docks and setup a temporary bank with two barrels and a piece of wood as his desk.  He then began taking deposits and giving loans to help not only businesses, but also the working class, so that they’d have the money they needed to rebuild their homes and their lives as quickly as possible.  At that time, none of the other banks had re-opened and most did not do so for several weeks, so few who kept their money in banks had access to it and many others had lost everything in fires.  Giannini also immediately sent two ships to Washington and Oregon to acquire large amounts of lumber to try to work around the inevitable materials shortage that he foresaw.  That lumber he sent for comprised most of the lumber available in the early stages of rebuilding San Francisco.

Because so many had lost everything including in many cases documentation on who they were, Giannini gave these people loans based on nothing but a signature and a handshake.  He supposedly never tired of mentioning to other bank big-wigs that wouldn’t loan to the common man that every single loan he made that way to so many working class individuals was ultimately repaid in full. (His reason for starting Bank of Italy in the first place was due to this disagreement with banks of the day over the fact that they’d almost exclusively only lend to the rich. When he was unable to convince board members in the Savings and Loan board he was on to start lending to the common man, he started his own bank instead. Even before the quake, he always lent based on his judgement of someone’s character, rather than their assets. His near exact philosophy on lending was summed up in It’s a Wonderful Life in the scene directly after George Bailey’s father’s death where he’s addressing the board, pleading that they keep the Savings and Loan open, which can be seen here.)

Despite the efforts of many to help rebuild San Francisco quickly, the disaster diverted trade, industry and population growth south to Los Angeles which quickly became the dominate city in California. Many of the city’s leading poets and writers also retreated to the established arts colony, Carmel-by-the-Sea.

In the rush to rebuild the city, building standards were at first made much more stringent, but after about a year, they were relaxed, “by upwards of 50%” according to historian Robert Hansen. Building standards did not reach even 1906 levels until the 1950s. This means that the majority of the buildings standing in San Francisco today were built in the first half of the 20th century under these lax codes. A detailed analysis of the city today estimates that an earthquake less powerful than the 1906 quake would completely destroy many sections of the city…