The Origin of Cheerios 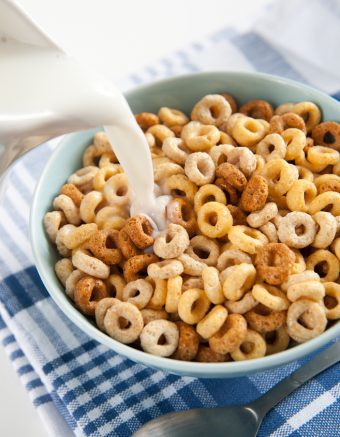 Today I found out that Cheerios used to be called CheeriOats.

Cereal has become such a go-to food for breakfast for children and adults alike that it’s difficult to think that it hasn’t always been around. In the grand scheme of things, cereal is a relatively modern invention. Cheerios entered the cereal playing field a bit late, and they weren’t always called Cheerios.

During the Civil War, many Americans were suffering from dyspepsia, or indigestion, likely caused by a high protein diet largely composed of fatty meats and not nearly enough fibre. Symptoms included upper abdominal pain and bloating. At the time, doctors decided the American populace needed to be taught better eating habits and established institutions called sanitariums in order to emphasize a better diet and a more active life style.

Dr. James Caleb Jackson founded the Jackson Sanitarium in New York. He was one of the first to mix water with whole wheat graham flour, resulting in a breakfast cereal he called “Granula.” Though the cereal had to be soaked in milk overnight to be palatable, the idea of cereal caught on.

In 1866, Ellen White created the Western Health Reform Institute in Battle Creek, Michigan, where she paired up with John Harvey Kellogg to come up with  a way to make cereal more widely available. John Kellogg and his brother Will came up with the first “flake” cereal that were originally called “Granose Flakes,” which were made available in 1896. Later, Will went on to found the Battle Creek Toasted Corn Flake Company, which went on to become the Kellogg Company known for its many cereals today. Also in Battle Creek, a way to puff rice was discovered by Alexander Anderson. Quaker Oats went on to introduce puffed rice cereal to the markets in 1905.

By the early 1900s, cereal companies had wheat, corn, and rice covered, but a cereal with an oat base had yet to break through the market.

Thus, in 1941, CheeriOats were introduced as a “ready-to-eat” oat cereal. The name emphasized the main ingredient to differentiate itself from the numerous other brands out there. Unfortunately for CheeriOats, Quaker Oats took offense to the name, claiming the “Oats” part infringed on their trademark.  While it is highly unlikely Quaker Oats would have won in court, to avoid the issue altogether, the name was changed to Cheerios in 1945 to avoid further dispute.

As to the shape, which ultimately inspired the second half of the updated name, about ten different shapes and sizes were considered for Cheerios before the creators settled on the small “o” shape, which they achieve via a special design of a “puffing gun”. Cheerio dough is heated and shot out of this gun at hundreds of miles per hour, making the dough puff and resulting in the “o” shape.

By 1951 Cheerios was the top-selling cold cereal sold by General Mills.  Today, Cheerios continue to dominate the cereal market with about one eighth of all cereal box sales in the United States being Cheerios.