The Slightly Sordid History of Twister 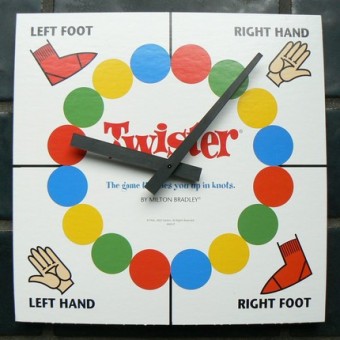 Twister has been a sure fire way to break the ice at parties for decades now. Earlier centuries had waltzes and minuets as socially sanctioned ways to get physically closer to the opposite sex. In the 20th century, for a time this popularly switched to the game of Twister; a very different activity, but the same underlying concept.

Before we explore the particulars of how Twister became a part of our shared popular culture, let’s first quickly review the basics of the game for anyone who may have been living under a rock. Twister is played on a large plastic mat which serves as the playing board. It has four rows of large circles, each row being red, green, yellow or blue.

Due to the limited amount of colored circles, players will often be forced to put themselves in unseemly, precarious or even extremely risqué positions if they don’t want to be lousy quitters. A player is eliminated when their elbow or knee touches the mat, or if they fall. Are we all up to speed now?

The original idea for the game that became Twister came from ad exec and inventor Reyn Guyer in 1965. His company, the Reynolds Guyer Agency of Design, had been hired to do a promo display for a shoe polish company, and he was tinkering with colored polka dot paper for ideas. He was suddenly hit with inspiration for something much different – a board game where the pieces were not plastic, but people. Guyer called the first version of his invention “King’s Footsie”, and the peals of laughter his test group had trying it out assured him he had a winner.  At this point, Guyer hired game designers Charles F. Foley and Neil Rabens to assist him in further developing the game.

They tossed around several different names, finally landing on “Pretzel.” Unfortunately, this name was not legally available, so “Twister” was settled upon, a name that Guyer was never happy with, thinking that it wasn’t descriptive of the game in the way that “Pretzel” was.

When it came time to patenting the game, Guyer claims that Foley and Rabens deliberately left him out and off of the patent. He said, “There is a patent, and quite frankly, I wasn’t part of it. Foley and Rabens did a fabulous job and we worked together on it. I feel badly that they didn’t stick around to develop a division of our company. People have a tendency to attribute new products to one person, and I’ve never, in any of the products I’ve developed, seen it happen that one person did it. You share ideas and it’s a process.”

According to Raben, shortly after filing the patent, they then signed over the rights to Twister to Guyer, with the understanding that they’d be given a cut of any profits from the game. What ever the truth of the matter, Foley and Rabens went on to form their own toy company shortly after this. Guyer also went on to bigger and, perhaps, better thing when he inventing the Nerf ball.

Meanwhile, back in 1965 in the executive offices at Milton-Bradley who acquired the rights to Twister, the head honchos were a bit uneasy about Twister’s naughty connotations and what it could do to their company’s squeaky clean reputation. To others, the potential for profit outweighed any moral considerations – after all, the game consisted of a sheet of plastic and a piece of cardboard, so the manufacturing costs were practically nil. Even so, during its first few months on the market, Twister barely sold at all. Sears, for example, was reluctant to put the game in its catalog, not sure it was right for their family-friendly demographic.

Just as Milton-Bradley was about to throw in the towel, one last desperate measure was attempted to promote the game. The PR team decided to pitch the game to the Tonight Show.

On May 3, 1966, Johnny Carson and his guest that evening, the beautiful and buxom Eva Gabor, demonstrated the charms of the until-then almost unknown game. After a few color dot-wrought contortions, interspersed with Ava’s heavy Hungarian accent and Johnny’s priceless facial expressions, the studio audience was roaring with laughter. Twister’s popularity exploded – three million units of the game were sold in that year alone.

Twister was proclaimed the “Game of the Year” in 1967, and became one of the iconic toys of the decade, surpassed only by the Hula Hoop. Some of its competitors mumbled that Milton-Bradley was guilty of selling “sex in a box,” but this sounds quite a bit like the sour grapes of rivals wishing they’d come up with a great idea first.

As the decades have passed, Twister has become a beloved part of popular culture. It is believed that over 65 million people have played the game at one time or another, and Twister tournaments have become popular as fundraising events, especially for college kids. Twister has been mentioned in songs by R.E.M and Britney Spears, and referenced on the TV show Friends. You’d be hard-pressed to find someone who hasn’t at least heard of it in the Western world, if not played it. Not bad for a game that started out as a promo for a back- to-school shoe polish display.