Egg Whites Do Not Make a Good Burn Treatment 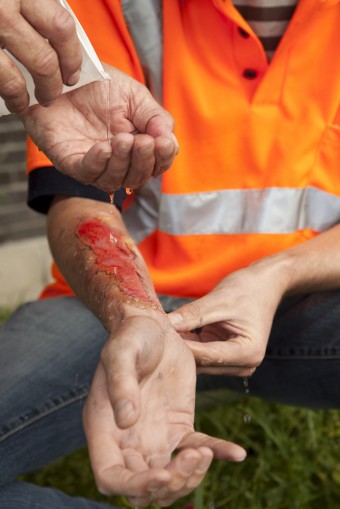 Craig, I’ve actually had a couple of people try and convince me of this in the past. A quick Google search will yield several, not so reputable, websites claiming this is true; but the short answer to your question is, “No. Egg whites do not help with burns, and they can actually make the situation worse.” As many know by now, and some lament, I’m not one to say something here without giving the long, medically detailed answer- occupational hazard to being a nerdy paramedic. So you can either take my word for it, or to truly understand why egg whites are not a great choice for burn treatments, read on and let’s look at what we’re trying to treat when burned, and what’s in egg whites to see if that helps.

On the surface, this theory does seem plausible. The egg whites are made mostly of water (90%) and numerous proteins (10%) like albumin and globulins. Cooling with water is a well known and time tested treatment for pain relief associated with minor burns. Most egg whites tend to be cooler than the area being burned, so that only leaves us with the proteins to consider. So now let’s look at burns and what we’re trying to treat and see if the added proteins to the water are more helpful than plain water.

There are several types of burns, including chemical, electrical, friction, radiation and thermal (both hot and cold). No matter the cause of the burn, the result can leave the skin and underlying tissues, extremely damaged.

The focus on treating burns revolves around 4 main things. Stopping the burning (obviously), pain relief, infection control, and warding off dehydration and hypothermia.

The skin is a fantastic organ that’s responsible for protecting our bodies from outside pathogens like bacteria and viruses. It also helps keep our precious body fluids in place and gives us a nice bone blanket to keep warm. When the skin gets damaged, it can no longer provide us with those benefits. It’s no surprise then; infection dehydration and hypothermia are the most common lethal complications of burns. For instance, infection is the leading cause of death in burn victims accounting for approximately 10,000 deaths per year in the United States.

Now that we know what we’re trying to treat, let’s see if egg whites help.

Stopping the burning- When it comes to chemical burns, egg whites definitely won’t help. To stop the burning, you need to brush the chemical off and then flush the area with copious amounts of water to get any microscopic material left. Obviously egg whites will do nothing to stop electrical, thermal, nor friction burns either. Unless, of course, you have something like a bathtub filled with egg whites for the burning person to jump into, but that seems a bit far-fetched. In the end, egg whites won’t stop the burning processes.  Now that one’s somewhat obvious; what about pain relief?

Pain relief- Third degree burns have damaged the nerve cells so badly that the areas affected by these types of burns don’t hurt, so we’ll focus on 1st and 2nd degree. The only study I was able to find that looked at treating burns with both water and other substances, including egg whites, was done in Milas, Turkey. The results of that study showed subjects treated with egg whites had no greater decrease in pain compared to those who used only water. While many substances that are cool and cover a burn area will provide some pain relief, numerous studies have shown the use of most home-burn-remedies to treat burns greatly increases your chance of complications, compared to those using only water. In the end, even though you might get some initial pain relief from applying cold egg whites on minor burns, water does the same thing, without all the complications, which I’ll talk about shortly.

Infection control- Infections are the leading complication associated with burns. Because of this, they’re arguably the most important thing to consider when treating someone who’s been burned. The proteins in egg whites do nothing to help with infection. In fact, they will most likely increase the chance of infection as egg shells, yolks, and whites all can contain numerous types of bacteria including salmonella. So if you thought egg whites might help with infection, they actually do the opposite.

Dehydration and hypothermia- Dehydration is a big concern for those treating burns. A person whose skin has been damaged will begin leaking fluid from their bodies. Not from their vascular system, but from all the areas around your cells, organs and blood vessels, known as your interstitial space. Once that fluid begins to be lost, you will start to draw fluid from within your cells, organs and blood vessels, further complicating the dehydration.

This is such a concern, due to the amount of fluid burn patients lose, there is a standard formula for how much you need to give them. Known as the Parkland formula, you take the patient’s weight in kilograms, multiply it by 4 and then by the % of body surface area burned. Half of that volume will need to be given in the first 8 hours and the other half in the next 16 hours. For example, a 180 lb person (82 kg) who has about 50% of their body area burned will need ((82 * 4) *50)/2 = 8200 mL = 8.2 liters in the first 8 hours and the same in the next 16. For reference, that same person has only about 5.4 liters of blood volume. Egg whites will certainly not help with rehydrating someone, and since we’ve already discussed that it’s a cooling substance, it’s not going to help them with hypothermia either.

The last vestige of this myth is one where some people say it helps with skin regeneration. The problem with this thought process is how skin repairs itself. In order to not make this article too much longer, if you’re interested, for a full explanation on how the skin repairs itself, you can read my article here: How Scars Form. The short version is that the proteins that are involved with skin regeneration don’t begin weaving their magic (they form in a basket weave appearance) until after a scab is formed. The scab will certainly prevent any egg proteins from assisting in regeneration. If it didn’t, bacteria would be able to enter and we would be back to the infection problem again.

There you have it Craig, egg whites will not play a positive role in helping treat burns, particularly not over something like water, though, of course, they’d be better than something like, say, treating a burn with battery acid… But, over simple water, the egg whites might even just make it worse.

Now, if you are interested in a home remedy that actually works and has several positive benefits on burns, try some raw honey. Really.  Honestly, I was extremely skeptical on this one myself, but after doing the medical research, I was wrong and the honey touters were right. If you would like to know why, read my article on the subject here: Honey Can be Used for a Variety of Medicinal Purposes