The History of Pac-Man 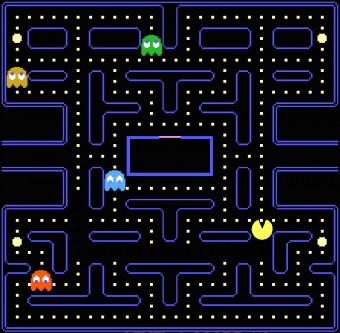 To call Pac-Man a mere game would be an injustice.  It’s a cultural icon, a symbol of an entire decade, as well as an entity that redefined gaming itself. Evidence of this can be found not only in its initial success, but also by the fact that it continues to be loved and valued by every new generation of gamers. With that in mind, let’s take a look at the history of Pac-Man and the way in which it changed the world of video games forever.

It began with pizza.

Back in 1979, 27 year old Namco employee Toru Iwatani claims he was staring at a humble pizza when he had an idea for a video game that centered around eating. What inspired him? The pie was missing two slices and thus resembled a mouth. What resulted was Pakkuman – a name that was derivative of the Japanese phrase “paku-paku taberu”. This is a onomatopoeic slang term that is used to describe the sound that a mouth makes when it’s opened widely and then closed again in close succession. In short – exactly what the Pac-Man character does to eat up his delicious dots. Speaking of eating, the inspiration behind Pac-Man consuming food to gain power was reportedly derived from Popeye.

Up until this point in time, the most popular arcade games (such as Asteroids and Space Invaders) were primarily targeted towards and enjoyed by young boys and teenagers. Iwatani wanted his game to appeal to a far wider demographic, which led him to add both the maze element of the game as well as the ‘kawaii’ ghost enemies (Blinky, Pinky, Inky and Clyde). The game was changed to Puck Man before release due to the shape of the character.

Once the game was released in the United States, several things were changed. Firstly, the difficulty was increased  in order to appeal to a Western audience, as was the pace of the game and the artwork on the cabinet. Most importantly though, the name was changed out of fear of vandals turning the “P” into an “F”. Smart move.

Another vital difference was its reception. In Japan, the game received a mere lukewarm response, but the US was an entirely different story. Investors themselves didn’t see much merit in the game, and weren’t overly impressed by it at trade shows prior to its release. In fact, a race car game by the name of Rally-X was expected to be the most popular of the year. Of course, they were wrong and Pac-Man was an overnight hit in the States, quickly surpassing Space Asteroids in revenue and made over a billion dollars in quarters within its first year; by the 1990s, the arcade game had generated about two and a half billion dollars.  That’s a lot of quarters. Today, Pac-Man is often cited as the highest grossing video game of all time.  Now just imagine if Toru Iwatani had decided to go out for Chinese that night instead of pizza…