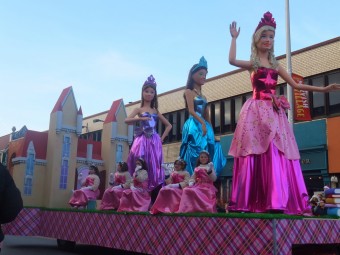 Today I found out that the makers of Barbie used to sell a doll whose breasts grew when her arm rotated.

Yes, you read that correctly. It was 1975 and the doll was called “Growing Up Skipper”. When you rotated her arm, she grew an inch taller and her small breasts grew out of her plastic chest. She could return to her pre-pubescent self simply by rotating the arm back the way it was.

Mattel created the original Skipper doll in 1964, in response to requests of Barbie fans wanting Barbie to have children of her own. Given how Skipper eventually turned out, one would think the next logical step after the request for mother-Barbie would have been the creation of a Barbie doll where she grew bigger breasts and a pregnant belly when her arm was rotated, but that would ruin Barbie’s figure now wouldn’t it? Apparently not wanting to create “Knocked Up Barbie”, Mattel created Skipper Roberts, Barbie’s younger sister. The idea was that Barbie would babysit Skipper, who in turn, would bring out all the maternal qualities Barbie could muster, without ruining the blonde beauty’s flawless figure. 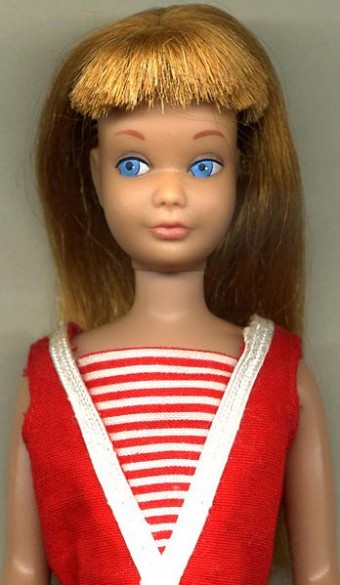 The original Skipper actually did not come with the magic rotating arm that lead her through the gateways of puberty in less than one second flat. She was supposed to be young enough that Barbie had to babysit her and, when she was first released, her appearance matched her imaginary age. Barbie stood 11.5 inches tall, Skipper was only 9.25 inches tall and flat chested. Although there were many different versions of Skipper between 1964 and 1975, including “Skipper on Wheels” in 1965 and “The Sun Set Mailbu Skipper” in 1972, she remained Barbie’s younger sister and avoided the oversexualization that plagued her older sibling. The 1975 “Growing Up Skipper” doll was the beginning of the end for Skipper and her reason for being.

And it did not take long. By 1979 Skipper was pretty much unrecognizable. Now called “Super Teen Skipper” children no longer had to rotate her arm to make Skipper’s breasts appear. Skipper now came with small, permanent breasts and her face had changed to make her appear older. In keeping with the oversexualization theme of Barbie dolls, in 1985 Mattel released “Hot Stuff Skipper”. Keep in mind that this doll is designed to be only in her early teen years, which makes the whole “hot stuff” thing even slightly more creepy than the “growing breasts” version.

1988 brought us “Teen Fun Skipper”. By now Skipper appeared to be between 13 and 15 years of age. Her breasts were larger, her waist more flexible and her body taller. But she was not done growing. In 1997 “Teen Skipper” was born. She was taller and her breasts had grown even larger. She was now almost as tall as Barbie and pretty much the same age.

Between 1975 and present, Skipper’s looks have changed dramatically and presently she is just as tall, just as developed and just as oversexualized as her older sister. In fact, they are now both teenagers of about the same age. What? Barbie hasn’t aged one bit and Skipper has gone from a pre-pubescent little sister that Barbie had to babysit to pretty much Barbie’s fraternal twin sister? Oh Mattel, you must have forgotten why you created Skipper in the first place.