Dogs and Cats are Typically Right or Left Pawed 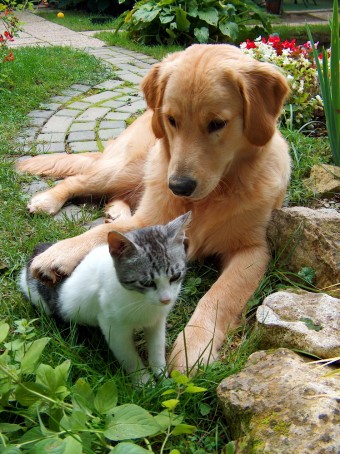 Today I found out dogs and cats are typically right pawed or left pawed.

Dogs, on the other hand, according to the University of Manchester study, tend to be more evenly split with around 50% being left pawed and 50% being right pawed, with a statistically insignificant number being ambidextrous.

In addition to that, there seems to be a connection between the gender of the animal and which paw is dominant in both cats and dogs.  Specifically, female cats and dogs typically will have their right paw be dominant, while males tend to go with the left paw.  However, if the animal has been spayed or neutered at an early age, this distinction goes away.

Determining if your cat or dog is left or right pawed or ambidextrous isn’t as simple as running one test, such as giving them a toy to play with just out of their reach and seeing which paw they reach with.  This is because their paw preference is often weekly expressed, unlike with humans.  Thus, in order to accurately determine your pet’s paw preference, you need to run such tests several dozen times to see the trends.

Some helpful such tests for dogs and cats include: if you’ve taught your dog to shake hands, which paw do they seem to like to use the most?  If your dog or cat is playing on its back and you put your hand just out of their reach, which paw do they reach for your hand with?  You can also try putting a treat or a toy just out of their reach underneath a bookshelf/coffee table/couch /etc. and see which paw they typically try to reach for the treat or toy with.  You can put some peanut butter on the top center of their nose and see which paw they use to get it off with. For both dogs and cats, if the animal wants inside or into a room you’re in, which paw do they typically use to scratch at the door? Another good one is to put a treat underneath something and see which paw they use first to try to uncover the treat with. Yet another test is to place a small piece of paper or plastic on a smooth surface so it can slide, and then place a tasty, lickable treat on the paper.  When the dog or cat licks it, inevitably the paper/plastic will slide and they will likely use one of their paws to stop it from sliding while they lick.  In all these cases, record which paw is used and once you’ve done several dozen (at least) such tests, check to see if there is a clear dominant paw.  If not, continue on until one emerges.  If you’ve done 100-200 or so such tests and there is no noticeable paw preference, your animal is probably ambidextrous.

That being said, it should be noted that cats, as in all things, tend to be trickier to figure out than dogs.  For instance, it’s been observed that when cats are playing, they typically don’t exhibit much in the way of paw preference, but when they want something, like a treat, it’s then that they’ll usually use their dominant paw first, unless they are simply one of those 10% or so that are ambidextrous.