The History of the Goodyear Blimp 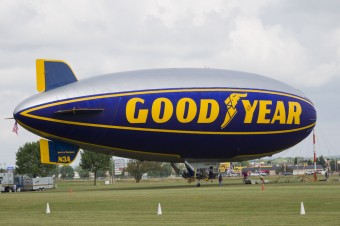 It’s a bird! It’s a plane! Oh… it’s, a blimp… 1925 marked the year when the first Goodyear airships ascended to the skies. More than 85 years later, the iconic Goodyear blimps can still be spotted drifting through the clouds during football games, basketball tournaments, and even over the 2012 London Olympics.

While today the Goodyear blimps are invariable associated with sporting events and used for advertising purposes, this was not always the case.  Goodyear started out in the “blimp” industry by making the envelopes for these types of airships. They then worked into creating the airships themselves and were soon awarded with a government contract to do just that.

Five years after Goodyear created its first airship, two massive rigid aircraft named the USS Akron and the USS Macon were born. These flying wonders were created for the US Navy and carried specialty planes like the F9C-2 Curtiss Sparrowhawks, which could be launched and retrieved during flight for long range scouting and defensive purposes as neither airships were equipped with weapons.

These massive aircraft were built with internal metal frames, could carry and maintain up to five planes while airborne, and were over two football fields in length, weighing in at a stunning 400,000 pounds (181,437 kg). 6.5 million cubic feet of helium was needed to lift the monumental ships into the sky.

On April 3, 1933, the Akron was sent out to calibrate radio direction to find equipment along the northeastern coast of the United States. Only a few minutes after midnight, the aircraft was hit with a series of strong winds which caused the ship’s tail to strike water and crash. A heartbreaking 73 lives were lost that night with only three survivors.

February 12, 1935, the Macon joined its sister aircraft when it hit a storm and its upper vertical fin was damaged. The blimp rapidly climbed to a dangerous altitude of 5,000 feet, which caused the automatic gas valves to open and release helium before its unavoidable decent. The Akron crashed in the Atlantic Ocean- the USS Macon met a similar fate, crashing into the Pacific. Thankfully, due to the tragic loss of the Akron two years prior, the Macon was equipped with life-jackets and rafts which saved 81 lives and only 2 were lost.

Despite the loss of the USS Akron and the USS Macon and the declining popularity of these types of aircraft, Goodyear continued to design and build airships and between the 1940s and the 1950s, the company built a series of surveillance airships for the U.S. government. These blimps were created to watch and protect merchant ships along the coast, as well as monitor and send early warning of an incoming attack if present.

One of history’s most historic aircraft, the Goodyear-built ZPG-2 (The Snow Bird), was among the surveillance fleet. At the time, the record for continuous flight without landing or refueling was set at 200 hours and 26 minutes. On March 4, 1957, Snow Bird took flight from NAS South Weymouth near Boston, Massachusetts and after an impressive eleven day voyage, the airship landed at Naval Air Station Key West, Florida on March 15, 1957, breaking the previous record for continuous flight.

Since then, four Goodyear blimps have crashed due to bad weather or malfunctions, the most recent accident was The Spirit of Safety which, ironically enough, on June 12, 2011 caught fire. The Australian pilot, Mike Nerandzic, was a hero during that crash. The three survivors of the crash told the media that the blimp had caught fire during landing. Once the blimp was a mere two meters off the ground, Mike told the three passengers to jump to safety, which they did.  In his last moments, rather than attempt to escape himself, Mike steered away the burning blimp from his ground crew and was later found dead at the controls.

As to how the Goodyear blimp became inexorably associated with sporting events, this happened in 1960 when Goodyear, with the end of their government contract for airships looming, switched gears and decided to try using their blimps as aerial platforms for cameras during sporting events.  This provided a service for sports coverage outlets while simultaneously functioning as a highly visible advertising platform for Goodyear itself.  The first such event partially filmed by cameras aboard a Goodyear blimp was the 1960 Orange Bowl in Miami.

Needless to say, this has worked out exceedingly well for the company with Goodyear blimps traveling an average of 100,000 miles per year to various major sporting events, which is saying something considering they travel at an average speed of just 35 mph (about 56 km/h), though they are capable of speeds as high as 53 mph with favorable winds and the twin 210 horsepower engines at full throttle.

Today, the Goodyear name can still be spotted drifting through the clouds on one of its four active blimps, three of which function in the United States and one in China.  The three U.S. ships are The Spirit of America, The Spirit of Goodyear, and The Spirit of Innovation. The Navigator can be found over the skies of China.