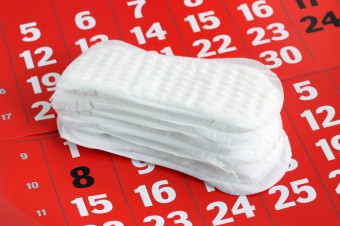 Do women’s menstrual cycles sync up over time if they are in close proximity to each other? Being someone who lives with 4 girls and 1 other boy, this knowledge would be very beneficial. I feel like I should know if the estrogen ocean I’m swimming in will have very stormy seas every 28 days. The belief that this occurs is widely known. In 1999, one study reported that 80% of women believe this phenomenon occurs and 70% of them find it pleasant to have this be the case. The truth, like so many other things in science, is controversial. The main body of evidence, however, suggests this is nothing but a myth and it’s really just random chance when this synchronization is occurring. Let’s find out why.

The menses phase is when the woman is actually bleeding. The average time frame of this bleeding is 3-5 days, though 2-7 is considered normal. It’s this phase people are paying attention too when they talk about menstrual cycles synching up. They look at the first day of bleeding as the start point. The follicular phase is where the follicles in the ovaries begin to mature and form an egg. Simultaneously estrogen levels rise causing the lining of the uterus to thicken. Ovulation then occurs which releases the egg due to an increase in a hormone called the luteinizing hormone. The final phase is the luteal phase. The egg is released from the ovary and travels down the fallopian tubes and in to the uterus. If the egg is fertilized and attaches to the uterine wall, pregnancy begins. If not, estrogen and progesterone levels fall causing the thickened lining in the uterus to shed and menses begins again.

The entire process from the start of menses to the beginning of the next menses is mediated by hormones. Because of the hormone mediation, proponents of the synchronization theory claim that pheromones can affect hormone levels and thus, affect the cycle.

The theory began in 1971 when a psychology student at Harvard (Martha McClintock) published a paper in “Nature” stating that women who spend a lot of time together will tend to have their menstrual cycles synchronize over time. She theorized that pheromones affected the hormones of the women causing the synchronization. Pheromones affecting people in general is an extremely controversial scientific topic in and of itself. It would take an entire article to do it justice so I won’t be going into it here. That being said, in 1998, McClintock published another paper in “Nature” which found that if a woman was exposed to cotton pads soaked in the sweat of women in their follicular and luteal phases, the phases of their cycles were significantly altered.

The controversy lies in how you interpret the data from McClintock’s, and others, studies. The differing lengths of cycle times combined with a myriad of other things that affect cycles, causes the results to be simply a matter of chance. One researcher, H Clyde Wilson, outlined three serious errors involved in McClintock’s research. When you correct for these errors, the evidence for synchronization evaporates.

So why is this so complicated?  Defining what exactly synchronization in cycles is can be extremely difficult. While there are averages, most women tend to have their own unique cycle that can be affected by many things. Suppose you have one woman who has a 28 day cycle and one that has a 29 day cycle. If they both start menses at the same time this month, they will be off by one day on the following cycle and then 2 days on the one after that. Over time they will, once again, have a cycle that will coincide with one another. To take it one step further, let’s say you have women at both ends of the “normal” range for cycles. The first has a 21 day cycle and the other has a 35 day cycle. If the women who has a 35 day cycle starts on January 1st, and the women with a 21 day cycle starts on January 15th, both of their cycles will start approximately at the same time the next month (February 4 and February 5 respectively). Those two women could say “Wow, we were two weeks off last month and this month we have been spending a lot of time together and look, our periods are synchronized!”

Other things to consider when talking about cycle periods is that each individual has different patterns of normal. Some have regular patterns, some have variable patters, and others have regularly irregular patterns!  Those same women can also experience different cycle lengths and regularities depending on several environmental factors such as strenuous exercise, puberty and menopause, low body fat, and extreme weight loss or gain have all been shown to affect cycle lengths.  Due to the fact that hormones regulate the entire process, anything affecting hormone levels, will in turn, affect menstrual cycles.

Simply interpreting the data and not being cognizant to our “confirmation bias” (the tendency to search for or interpret information in a way that confirms one’s preconceptions) can lead to errors in statistical analysis.

Take for a specific example two subjects involved in a study that started on July 1st. Subject A with a 28 day cycle starts her menses on July 25th and then again on August 22nd.  Subject B, with a 30 day cycle, has her onset start on July 5th and then again on August 4th. If you believed in the “synchronization” theory and were not aware of your confirmation bias, you could look at these numbers and conclude their cycles were 20 days apart (July 25th and July 5th) in the beginning and are now 18 days apart at the second onset (August 4 and August 22). Thus the subjects are probably synchronizing. The truth is, the opposite is actually true, they are diverging not converging. Subject A would have had menses start on June 27th as well. Not looked at by this study starting on July 1st. That puts both subjects start as 8 days apart in the beginning (June 27 and July 5). The second cycle being July 25th and August 4th makes them 10 days apart and diverging. The exact opposite of the original conclusion.  So you can see from this how it would be easy for a study on this subject, if not performed correctly, to provide very wrong conclusions even without all the noise of things like regularly irregular periods and other factors effecting hormone levels.

The idea that synchronization is simply a matter of chance has been replicated by several other studies since McClintock’s “groundbreaking” conclusion in 1971. One of the most famous was done by Zhengwei Yang, of North Sichuan Medical College in China, and Jeffrey Schank, of UC Davis in 2006. They found women living in groups did not synchronize their cycles. They looked at and analyzed previous studies claiming synchronization occurs. After correcting for statistical errors, they showed those results were really at the level of chance. They went on to show that because of cycle variability, they produce convergences and divergences in menses onsets and this explains the perception of synchrony.

In the end, Michael Shermer in the book Don’t believe everything you think, said it best, “Smart people believe weird things because they are skilled at defending beliefs they arrived at for non-smart reasons.”

Whether you believe McClintock (the biggest proponents of synchronization out there, starting back from her days as a student) and say that your menses converging and diverging is a result of pheromones affecting your hormones, or you take a step back and look at the main body of research that gives a non-pheromone mediated reason for why the convergences and divergences happen, the result is the same. Due to the differences in female cycles, and the environmental factors that can affect them, there will inevitably be certain times when the women in your family will all be in their menses phase at the same time. I shudder to think! Father-son vacation anyone!