December 10, 2012 Daven Hiskey
Milly asks: Where did candy canes originally come from and how did they get associated with Christmas? 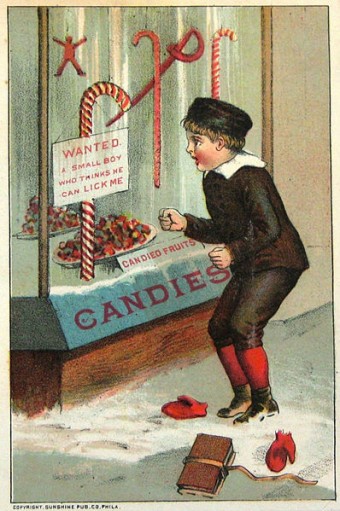 First, let’s start by dispelling a somewhat popular myth that more or less goes like this:

The white base color of the candy cane symbolizes Jesus’ purity; the red stripes symbolize Jesus’ blood when he died on the cross; and the J shape was chosen to represent the J in Jesus.

While that makes a great candy cane origin story, there is about as much evidence to back this up as there is supporting the myth that Mr. Rogers was once a sniper in the U.S. military and always wore long sleeve sweaters to cover all the tattoos on his arms and chest, one for each person he killed.  In fact, Mr. Rogers was an ordained Presbyterian minister; was never in the military; and anyone wanting evidence of his lack of any tattoos need only talk to someone at swim clubs Mr. Rogers use to frequent that allowed nude swimming. (Mr. Rogers one and only even slightly scandalous, with an emphasis on “slightly,” thing he ever seems to have done was that for most of his adult life he swam naked daily at certain pools that allowed it.)

But back to the topic at hand, there simply isn’t any evidence to support any of the above, though of course there’s nothing wrong with creating such symbolism around existing traditions.  We just need to stop short of calling it fact, which sadly seems to not happen very often with these sorts of stories.

So what’s the real candy cane story?  Well, there isn’t a lot we can say for sure. White, hard sugar sticks have been a fairly common confectionery for centuries.  As to how these straight sticks became bent into a J shape, there is a legend that this was done by a choirmaster in Cologne Cathedral in the late 17th century in order to symbolize a shepherd’s staff.  He would then give these shepherd staff candies to children to keep them quite during the traditional Christmas Eve Nativity scene reenactment / Christmas Eve Mass.

This makes a nice story, but there simply isn’t much of any evidence to back it up either, other than it is a long standing tradition often repeated by otherwise reputable sources. None of them, however, go so far as to give any direct evidence to support it.  Now, maybe some kindly old priest really did this, we just don’t have any real evidence but the story itself.  Given that it has been a time honored church tradition to try to associate as many Christmas season traditions’ “origin stories” as possible with Christianity, usually just for symbolism’ sake but often getting morphed into being believed as fact, color me skeptical on this one.

Starting around the 15th century, the church officially banned live reenactments of the nativity scene, something that had been previously extremely popular, so any such scene that involved a minister or choirmaster and took place in the Cologne Cathedral in the 17th century, would have been a static scene; so a little boring for kids to look at, as perhaps would be the Mass itself. But that’s hardly direct evidence that the story is true.  It also seems questionable that candy would be allowed in such a service. And, certainly, the practice didn’t catch on elsewhere, as the nativity scene reenactment was popular all over the place (starting in the 13th century) and nobody else seemed to think there was a need for giving the kids candy during Mass to get them to shut up, at least there isn’t record of it.

It could just as well have been the case, and seems slightly more plausible, that candy canes got the crook end simply as it made them easier to hang on a tree. (This is also why they are so closely associated with Christmas today). Around the same time candy canes seem to have gotten their crook (and in the same region this seems to have first happened, Germany) many other food items started to be used to decorate Christmas trees (like cookies, fruits, candies, and other such things).  About two centuries later, the first known candy cane that popped up in America was also supposedly thanks to a German immigrant, August Imgard, who used the candy cane for this purpose- decorating a Christmas tree in his home in Wooster, Ohio.

…Or maybe it really was a minister trying to associate the confectionery with Jesus and he simultaneously realized that the treat would not only be associate with Jesus if it looked something like a shepherd’s staff, but also would work well that way as a Christmas tree decoration. Who knows?  The point is that we don’t know. So as you read the various tales out there on the history of the candy cane, if they start spouting origin stories, make sure they have credible, direct evidence to back it up before you believe it.  (And if they do, please send it my way and I’ll update this article. ;-))

As to the stripes on the candy canes, this one is more of a modern invention, but even so, is nearly as much of a mystery as the rest of it.  Evidence, such as Christmas cards from the late 19th century, seems to indicate people were still going with the all-white candy cane at this point.  Then in the early 20th century there started to be many instances of candy canes showing up on Christmas cards with red stripes.

Given candy canes were used as much for decoration as eating at this time, it’s not surprising that somebody got the bright idea to put a colorful stripe on them.  It should also be noted that a little over a half century or so before stripes were known to be added to candy canes, there is a reference of white peppermint candy sticks with colored stripes added.  These weren’t crooked candy canes, but perhaps this helped spur the tradition of stripes on peppermint candy canes when, in the early 20th century, various candy makers started experimenting with other flavors, including peppermint.

But who first got that idea to make striped candy canes is still a mystery. Some say it was candy maker Bob McCormack in the 1920s.  McCormick’s company by the late 1950s would become one of the world’s largest peppermint candy cane producers, selling about a half a million candy canes per day at their peak. But it may well be that McCormick simply popularized the striping practice, rather than invented it. One thing is for sure, this idea spread like a wildfire and soon a red stripe on a candy cane was near universal, as was peppermint flavoring, perhaps as it would make the Christmas trees smell minty (when not wrapped in plastic as today). Or maybe just for the flavor… Who knows?

Now, despite lack of direct evidence that a Catholic priest (or choirmaster) had anything to do with the origin of the candy cane, there is a Catholic priest who has a claim to fame because of his association with the candy cane.  Father Gregory Keller invented the Keller Machine. (No, not the Dr. Who Keller Machine).  This one simply automatically put the crook in the candy cane.  Before this, the cane had to be manually bent when it was still warm/soft coming off the assembly line, usually using a wooden mold or the like.

Father Keller was the brother-in-law of the aforementioned Bob McCormack.  McCormack was having trouble at the time because about 22% of the candy canes produced by Bob and his crew were ending up in the trash as they broke during the bending process. Keller’s machine automated this process and shortly thereafter was perfected by Dick Driskell and Jimmy Spratling, both of which worked for Bob McCormack.  This made it so the candy canes came out perfect nearly every time.