On this day in history, November 30th… 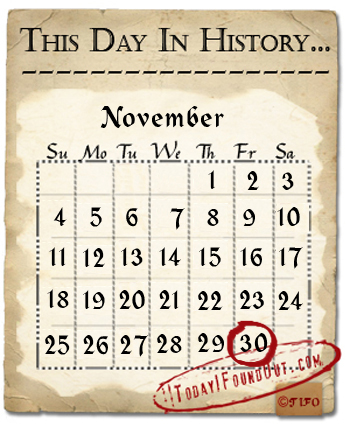 1934 :   4472 Flying Scotsman, a steam locomotive built in 1923 as a long-distance express train for the London and North Eastern Railway (LNER), became the first to officially exceed 100mph. In 1928, the train which featured a new version of the large eight-wheel tender which held 9 tons of coal, was first inaugurated and set to travel the 392 miles (631 km) route from London to Edinburgh in eight hours non-stop. On November 30th, 1934, the train ran a light test and officially recorded  160.9 km/h (100mph) and earned a place in the land speed record for railed vehicles.

1954 : A meteorite hits a woman napping in her home in Sylacauga, Alabama, making her the first known human to be struck by an extraterrestrial object  in the U.S. (Read more about this story here).

1982 :  Epic Records released Michael Jackson’s sixth studio album “Thriller”, that went on to become the best-selling album of all time. Produced by Quincy Jones, this album started off with a production budget of $750,000 and initially they looked at 30 songs. On the final album, Jackson wanted every song to be ‘killer’ and so only 9 of those songs made it and Jackson wrote four of them himself. Released on November 30, 1982, the album ‘Thriller’ sold one million copies worldwide per week at its peak and sold an estimated 65–110 million copies worldwide. Jackson received the highest royalty rate in the music industry to that point, around $2 for each album sold. Biographer J. Randy Taraborrelli explained the album’s success saying, “At some point, Thriller stopped selling like a leisure item—like a magazine, a toy, tickets to a hit movie—and started selling like a household staple.”

2004 : Ken Jennings, finally lost on Jeopardy!, after a 74 game winning streak, a record for U.S. game shows. Jeopardy! first started in 1964 on the NBC network and is one of the most popular & top rated game shows on television. In 2003, the makers of the show changed the rules to allow contestants to remain on the show as long as they kept winning instead of limiting them to 5 consecutive games, as they had prior to their 20th season. On June 2, 2004, Brigham Young University (where he headed the school’s National Quiz Bowl team) graduate Ken Jennings made his first appearance on the game show.  Jennings almost lost in that first game itself when he answered “Who is Jones?”, referring to Marion Jones. The host  Alex Trebek  showed leniency and said, “We will accept, as when it comes to female athletes, there aren’t that many.” Almost 6 months and 74 games later, in the Final Jeopardy! round of his 75th game, Jennings was stumped by the answer given to him- “Most of this firm’s 70,000 seasonal white-collar employees work only four months a year”, in the Business and Industry category. Jennings’ opponent, Nancy Zerg had a $1 lead over him at the time and she answered correctly with the question, “What is H&R Block?”. When Jennings’ incorrect response of, “What is FedEx?” was revealed, he lost the game with a final score of  $8,799. However, his total final winnings after his run on Jeopardy! was  $2,522,700,  the record as the highest money-winner ever on American game shows. He later went on to compete in the show’s ‘Ultimate Tournament of Champions’ and won the $500,000 second-place prize, along with a $150,000 prize in show’s “IBM Challenge” in 2011, increasing his total Jeopardy! earnings to $3,172,700.