This Day in History: December 1 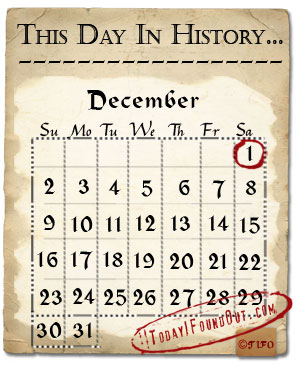 This act is one that almost didn’t happen.  When Parks first sat down, she was actually in the “black” section of the bus.  However, because the bus was full, the driver moved the sign back that marked where one section began and the other ended to allow more seats for white passengers.  People who were black were required to then give up their seats and stand.  In the extreme case where there was no more standing room, they were required to get off the bus.

Parks had actually had a problem with this same bus driver, James F. Blake, in 1943.  Parks boarded his bus from the front door and paid her fair, but Blake then demanded she get off the bus and use the back door because there were currently white passengers on board.  When she turned around to comply, she accidentally dropped her purse and sat down momentarily in one of the seats reserved for white people while she picked it up, which supposedly enraged the driver.  When she got off the bus to go re-enter from the rear, as was the standard practice when white people were on board, the bus driver closed the doors and sped off, leaving her in the rain.

Twelve years later, when she was asked by Blake to move, along with three other black people, those three complied but she refused, though she didn’t keep the same seat.  Rather, she moved and sat in the now vacant window seat, to allow the white passengers to sit down without having to move past her.

Parks did not do this because she was tired from working all day, as many people say.  From her own account:

People always say that I didn’t give up my seat because I was tired, but that isn’t true. I was not tired physically, or no more tired than I usually was at the end of a working day. I was not old, although some people have an image of me as being old then. I was forty-two. No, the only tired I was, was tired of giving in.

Blake subsequently called the police and had Parks arrested for violating Chapter 6, Section 11 of the segregation law of the Montgomery City code, which was enacted in 1900.  She was later tried and convicted and fined $10, plus $4 for court costs.  In subsequent years, Blake defended his actions stating: “I wasn’t trying to do anything to that Parks woman except do my job. She was in violation of the city codes, so what was I supposed to do? That damn bus was full and she wouldn’t move back. I had my orders.”

Many others had committed similar acts before her.  For instance, nine months before in Montgomery Alabama a 15 year old girl, Claudette Colvin, did the exact same thing and was arrested and convicted.  However, Parks’ case presented a better opportunity to publicly challenge the Montgomery City segregation code, because the 15 year old girl was pregnant out of wed lock and had supposedly created a disturbance when arrested; so her case was deemed unsuitable to be the “face” of the challenge of the law with the media, though it was argued before the Supreme Court as well Parks’ case.  Parks, on the other hand, had gone quietly; was married; had a job; was educated; had a clean record; was politically active; was the secretary of the Montgomery chapter of the NAACP; and was respected around town, even by many white people.

What followed was the famed Montgomery Bus Boycott, which was originally intended to only last a little while, but ended up lasting 381 days.  During that span, nearly all black people stopped riding the bus, which took away about 75% of the bus transit systems passengers and revenue.  The Boycott finally ended when the Supreme Court declared that the Alabama and Montgomery bus segregation laws were unconstitutional.