This Day In History: November 29

On this day in history, November 29th… 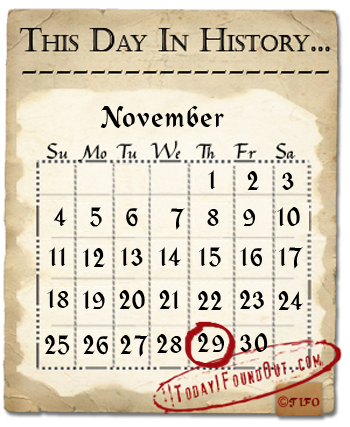 1961 : Enos the chimpanzee was launched into space, becoming the second chimp to travel to space and the first to orbit the Earth. Enos, along with many other chimps such as “Ham”, the first chimp to be launched into space, were trained as part of Project Mercury, which was the first manned spaceflight program in the United States. Project Mercury ran from 1959-1963; the primary objective of this program was to put a human being in orbit and land him safely back on Earth. (Read more here)

1963 : President Lyndon B. Johnson appointed the Warren Commission to investigate the assassination of President John F. Kennedy that had occurred a week earlier on November 22, 1963, in Dallas, Texas. At the time of the assassination (12:30 p.m.), then Vice President Lyndon Johnson was traveling three cars behind President Kennedy in the motorcade. Soon after the President was declared dead, Johnson was sworn into office as the 36th President of the United States at 2:39 p.m; he took the Presidential oath on board Air Force One in front of 30 witnesses, including Jacqueline Kennedy (wife of John F. Kennedy), who was still wearing clothes stained with her husband’s blood from a few hours before. In the wake of the shocking murder of the President, Johnson knew he had to step up and prove to be a strong leader. One of his first official acts was to issue an Executive Order to appoint a special commission (later referred to as the Warren Commission because it was led by Chief Justice Earl Warren) to perform a detailed investigation into the President’s assassination. Although the primary suspect, Lee Harvey Oswald had been shot and killed already (by Jack Ruby), the commission closely examined the circumstances surrounding Kennedy’s death; the site of the assassination; Oswald’s personal history; and listened to the testimonies of 552 witnesses present the day of the shooting. After a year-long investigation, the commission concluded that Oswald was responsible for the assassination and that he was acting alone. His motives remained murky as they didn’t get a chance to interrogate the suspect, and overall the report provided by the commission failed to convince everyone, giving rise to several conspiracy theories. Sixteen years later, in 1979, another congressional investigation was conducted that came to the same conclusion as the Warren Commission- that Oswald was responsible for the shots fired; however, they allowed for the possibility of a second shooter.

1996 : Executive Jose Ignacio Lopez de Arriortua resigns from Volkswagen, amidst allegations of espionage, racketeering, and copyright infringement. Formerly the Vice-President for worldwide purchasing at General Motors (GM), Jose is credited with pioneering a revolutionary system for buying auto components cheaply  that reduced GM’s costs and increased its profits. It came to be known as the “Lopez effect” within the automotive industry. He had envisioned a factory known as “Plant X” to be built using his advanced, cost-efficient purchasing system, but was disappointed when GM was dragging their feet with his idea. On March 15, 1993, Lopez jumped ship to Volkswagen, taking with him boxes of its confidential documents containing thousands of pages and computer files full of trade secrets. This started a four-year long feud between two of the world’s largest companies and one of the most  popular lawsuit involving accusations of industrial espionage against VW and Lopez both. In an attempt to settle matters out of court, VW made Lopez resign his position at the company. In January 1997, VW settled paying GM $100 million, but never admitted any wrongdoings. Volkswagen also agreed to buy at least $1 billion worth of auto parts from the American company between the period of 1997-2004.  However, criminal charges were still attached to Lopez in both German and American courts until July 1998 when he agreed to make charitable contributions totaling 400,000 marks (around $224,000) and the German courts dropped the charges. He never went to trial in the United States as the Spanish high court refused to extradite him.