John F. Kennedy’s Statement “Ich Bin Ein Berliner” was Not Interpreted as “I am a Jelly-Filled Doughnut” 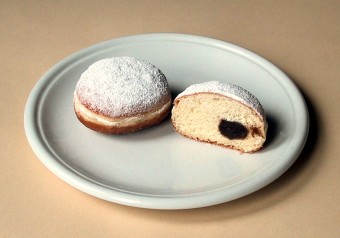 Myth: John F. Kennedy blundered in one of his most famous speeches, saying in German “I am a jelly-filled doughnut” instead of what he meant (in the figurative sense) “I am a person from Berlin”.

As German professor Reinhold Aman stated about this:

Yet another linguist, Jürgen Eichhoff, in his paper covering the misconception stated, “‘Ich bin ein Berliner’ is not only correct, but the one and only correct way of expressing in German what the President intended to say.”

The fact that this is a myth shouldn’t be a surprise to many because if “Ich bin ein Berliner” had been interpreted, “I am a jelly-filled doughnut”, it likely would have been major comedic news at the time.  The reality was, though, that the first known record of anyone interpreting it as such wasn’t until 1983, in the novel Berlin Game, 20 years after the speech was made:

‘Ich bin ein Berliner,’ I said. It was a joke. A Berliner is a doughnut. The day after President Kennedy made his famous proclamation, Berlin cartoonists had a field day with talking doughnuts.

In a review of the book, the New York Times decided to take this statement as true, even though the book is a fictional novel and no such cartoonists’ works from that time seem to actually exist.  Since then, this common misconception has made its rounds through various major news organizations, including CNN, the BBC, and Time Magazine, among many others.  You’ll even occasionally hear native English speaking German language instructors spread this myth, but you won’t hear a native German speaker interpreting the statement as such.

The misconception primary stems from Kennedy’s use of the indefinite article “ein”, rather than saying just “Ich bin Berliner”, as well as the fact that a “Berliner” is also known, mainly in far western parts of Western Germany at the time, as the name of a certain type of pastry created in Berlin around the 16th century.  Of course, a Berliner is also someone who is from or lives in Berlin.  Those from Berlin more commonly called that type of pastry a Berliner Pfannkuchen (“Berlin pancake”) or just Pfannkuchen.

Besides the fact that the person who translated that line for Kennedy, Robert Lochner, grew up in Berlin and was the one time Chief U.S. German interpreter in Western Germany, Kennedy also practiced the speech several times beforehand, including in front of other native German speakers, such as Berlin Mayor Willy Brandt, who saw no problem with the wording because his use of “ein” is actually correct in this context.  Had he said “Ich bin Berliner”, he would have been saying he was literally a citizen of Berlin, which isn’t true at all, nor the sentiment he was trying to express (more or less, “I was not born here and do not live here, but I am one of you.”)

Because he was speaking metaphorically, adding the indefinite article “ein”, “Ich bin ein Berliner” made that explicit.  So to be doubly clear, including or excluding the “ein” here is the difference between “I am (literally) from Berlin” vs. “I am (like someone) from Berlin.”

In neither case was he speaking of food and given he was a human being and the explicit reference he was making, nobody interpreted him as saying “I am a jelly-filled doughnut”, just as no one would interpret a person saying “I am a New Yorker” as meaning they are a magazine, burrito, or a town car.

The speech itself was meant to show support for the people of Berlin after the construction of the Berlin Wall and with the threat the USSR posed to them.  And contrary to what you’ll read in that original New York Times editorial covering this supposed gaff, no one laughed when he said it.  Rather, some 400,000+ people strong cheered.

You can watch the full speech below and see for yourself: