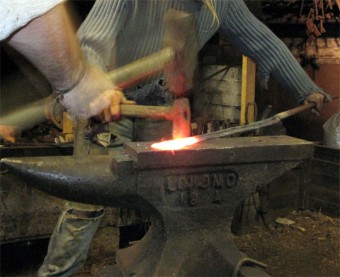 Today I found out why anvils are shaped the way they are and why blacksmith/farriers/etc. sometimes tap the anvil after a few strikes on the object they’re working on.

Anvil shape has evolved greatly since the earliest anvil-like objects.  These primitive objects used for anvils were typically made of stone, often just a slab of rock. The first metal anvils were made of bronze, then wrought iron, and, finally, steel, which is the material of choice today for anvils, though cast iron is also used in low-end anvils (cast iron is quite brittle for this particular use and absorbs more of the hammer blow’s energy than steel does, so it is not preferred).

Over the centuries, the common shape of the anvil has evolved from a simple slab to the shape most of us associate with an anvil today, namely the “London Pattern”, which became common in the 1800s.  While the length and overall size of the various elements can vary from anvil to anvil, the key features of the “standard” design are typically a horn, a step, a face, a hardy hole, and a pritchel hole.  The primary use of these various elements is as follows:

On a related not, if you’ve ever watched a smith work, you’ve probably noticed many of them will strike whatever they’re working on a few times, then follow it up by lightly tapping the anvil’s step or face a couple times.  You may have heard that they do this to cool the hammer down by having it come in contact with the anvil, but this is the opposite of what they’d want to do.  Warm hammers and warm anvils are actually what they want, because it keeps the hot metal they’re working with from cooling down as quickly, so it requires less heating while shaping, which saves time.  Further, the very brief contact between the hammer and the anvil isn’t going to transfer very much heat, even if the anvil is quite cold.

In reality, they are not actually tapping the anvil for any real purpose other than to simply either rest their arm while they quickly examine the results of the last few strikes or to simply keep their rhythm while they examine the piece. In the former case, resting the hammer on the anvil next to the piece is simply a convenient place to rest it.  With it in this position, it is a shorter distance to bring the hammer back up to the appropriate striking position, over say, letting one’s hammer and arm rest at one’s side while the piece is examined. In the latter case, some just find it nice to continue their hammering rhythm while they examine what they’re working on, rather than stopping completely.  They only tap the anvil, rather than strike it, both to save energy and because you should never pound an anvil directly with the hammer as it can cause slight deformations to form which would then be transferred to whatever you’re working on in the future.