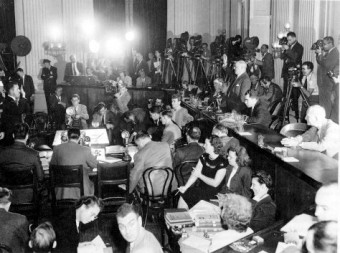 Today I found out the Cincinnati Reds were once renamed the “Redlegs” due to the second “Red Scare”.

The Cincinnati Reds name was originally inspired by a previously existing team, the Cincinnati Red Stockings, which was the first fully professional baseball team.  This former team had ten men on salary for eight months to play baseball for the Red Stockings.  It was organized by Harry Wright, who also played center field for the team and managed the defensive positioning, which was something that typically wasn’t done at that time.  The Cincinnati Red Stockings were wildly successful early on, going 57-1 (wins-tie) in their first season while touring the United States.  They followed this up by winning 24 straight games the next season before losing 8-7 in 11 innings to the Brooklyn Atlantics, which resulted in their attendance declining substantially and the team ultimately being disbanded, even though they only lost 6 games throughout that season.

This name stuck until 1953 when the association of the term “Reds” with communism caused the Reds to change their name to the “Redlegs” in order to avoid the social stigma.  Further, for a four year stretch from 1956-1960, the name “Reds” was removed from the team’s logo and no longer appeared on the team’s uniforms.  Despite the continued use of the changed logo, the name “Cincinnati Reds” was restored after the 1958 season.

If you’re wondering where the term “Redlegs” came from, this was once a derogatory term used to refer to a specific group of poor white people living on various islands in the Caribbean (generally originally from Ireland and Scotland).  They were also commonly known as “white slaves”.  Some were in fact actual white slaves, having been taken by press gangs and transported to Barbados to be sold.  Others were simply indentured servants, agreeing to work more or less as slaves for a time in exchange for transportation.  It’s estimated around 50,000 of these Redlegs were transported from Ireland alone during the mid-17th century.

So, apparently, the Reds preferred to associate themselves with slavery, rather than communism.  Although, this is marginally fitting given the reserve clause that was in place at the time, which forbid a player from being able to play for any team but the one who owned the rights to him when his last contract expired, unless he was released or traded.  This resulted in teams getting to set salaries nearly as low as they pleased and to completely control the careers of their baseball players. The only real negotiating tactic the players had at their disposal was to refuse to play baseball at all, which resulted in them not getting paid anything when they didn’t play and obviously wasn’t a good tactic for players who weren’t stars.