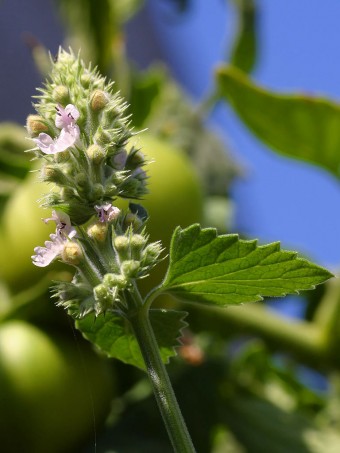 Catnip, which is a perennial herb in the mint family, contains a chemical called “nepetalactone” that is released when catnip is crushed.  When cats get a whiff of nepetalactone, most will start rubbing themselves against it, playing around with it, sometimes eating it, and generally will act quite bizarrely.  It is thought, but not known exactly, that this chemical mimics certain feline pheromones, specifically their theoretical facial pheromones (it isn’t known whether these actually exist, but many researchers think so, which is why cats probably like to rub their faces on various things).

Once cats have been exposed to the nepetalactone for a few minutes, it loses its effect on them and they will usually no longer be interested in it for about an hour or two, at which point the chemical will start to kick in again as they breathe it in and they will once again begin acting bizarrely around it for a few minutes.

Despite the apparent drug-like effect, it isn’t thought that catnip is in any way harmful to cats, nor is it thought that it is addictive.  Most researches think that nepetalactone simply triggers something in their brains that causes them to want to rub up against this particular smell, not unlike what dogs often do when they encounter certain smells.  That being said, cats can “overdose” on catnip, which will typically result in vomiting or diarrhea.  I’ve personally seen a cat that got into a bulk bag of catnip that was about five times the size of the cat.  The poor cat was found with catnip all over itself and more or less half buried in it.  As a result of this, for whatever reason, she was mostly unresponsive, was twitching and making random noises, and had a significant amount of drool in her fur around her head and mouth.  I expect this is something like coming home to an overdosing drug addict. 🙂  Unlike a person who’s overdosed on a drug, though, once the cat was extracted from her self made catnip bed and washed off (which was much easier to do than normal given her more or less catatonic state), within about 15 minutes of that she was completely back to normal with no residual effects.

Interestingly, not all cats respond to catnip. Whatever genetic quirk that causes them to respond to nepetalactone is inherited and only about 70% of cats out there show a behaviorally difference around catnip.  Further, cats under the age of a few weeks old also are not attracted to catnip and some even show an aversion to it.

Not only are very young cats sometimes averse to catnip, but so are cockroaches, mosquitoes, flies, and termites.  In fact, nepetalactone extract has been shown to be ten times more effective at repelling mosquitoes than DEET (N-Diethyl-meta-toluamide), which is the chemical traditionally used in mosquito repellant. However, it should be noted that when put on human skin, nepetalactone’s effectiveness as a mosquito repellant decreases quite a bit, so it’s more suitable as a mosquito repellent when sprayed on clothing or the like.