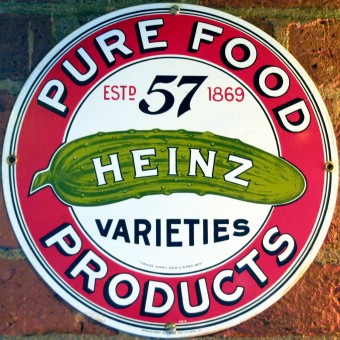 Today I found out the “57” in “57 Varieties of Heinz” has no real meaning; it’s just a lucky number.

By 1892, H.J. Heinz Company had grown from a small company selling horseradish in clear glass jars, to having over 60 products.  Despite having more than 57 products, at the behest of the founder of H.J. Heinz Company, the business instituted their now famous “57 Varieties of Heinz” slogan.

Henry Heinz had come up with the slogan while riding on a train in New York City in 1892.  While on the train, he spotted a shoe store advertisement that was promoting their “21 styles of shoes”.  He thought his company should have a similar slogan, promoting the fact that they produced many different products.

Rather than go with the exact number of products they made at the time (which would continue to grow to the over 5,700 today), he instead chose “57”.  According to H.J. Heinz Company, he chose this number simply because he thought it was a lucky number and liked the sound of “57 Varieties of Heinz”.  It was also reasonably close to the number of products that they actually produced, so they went with it.

Henry Heinz got his start selling food products all the way back at the tender age of eight years old.  At the time, he helped his mother in her garden and would take the vegetables around his neighborhood, selling them door to door.  One year later, using a recipe his mother had taught him, he started making and selling his own horseradish sauce, which later would be the same sauce he would found his first major company selling.

His parents soon gave him around 3/4 of an acre to support his entrepreneurial endeavors and while just ten years old, he was now selling large quantities of vegetables and horseradish sauce around his neighborhood.  Two years later, he expanded his operation to nearly four acres and was even selling to local grocery stores.  He continued growing in this way and, at his peak before going to college, grossed around $2400 per year, which would be around $55,000 today.  Now all grown up, rather than continue expanding at this point, he instead chose to go to college and earned a degree in business.

Heinz’ first business that he founded after college actually went bankrupt after just six years in operation.  The company was called “Heinz Noble & Company”, co-founded by Heinz and L. Clarence Noble.  They started out selling more or less the same horseradish that he sold as a child.  Unfortunately for him, the “Great Depression” hit starting in 1873 with the “Panic of 1873” and continuing until 1879.

Of course, this “Great Depression” eventually got its named usurped a little under 60 years later and instead is now commonly known as the “Long Depression”.  The Long Depression ultimately affected much of Europe and the United States.  While there were many events that led up to the eventual trigger, that trigger in the U.S. ended up being the failure of the Jay Cooke & Company bank, which had overextended itself in putting way to much capital into the railroad bubble of the day.

After the Jay Cooke bank fell, other banks soon followed, as did over 89 of the nation’s 364 rail road companies.  This had the net effect of nearly 14% of the U.S.’s workforce being out of work (compared to about 7.3% today and as high as around 20%-23% during the Great Depression).  This all also saw real estate values plummet, further intensifying the problem. The New York stock market even had to be closed for over a week during this crisis (more on the Long Depression in the Bonus Factoids Below).  Amidst all this, Heinz Noble & Company soon found themselves overextended as the Long Depression continued on.  They ultimately went bankrupt in 1875.

After the business went belly-up, Heinz didn’t take long to rebound, founding the H.J. Heinz Company just a year later in the midst of the Long Depression.  His new company pretty much did the same exact thing his old bankrupted company did.  This one worked out a bit better than the first.  Fast-forward about 137 years and H. J. Heinz Company  grosses around $10 billion per year with around 5,700 products and close to 33,000 employees.