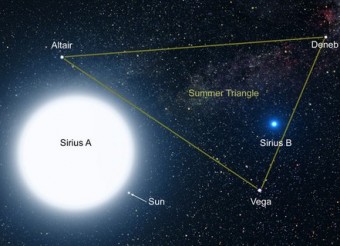 Today I found out why the hottest part of the summer is called the “Dog Days”.

The earliest reference to some aspect of this expression goes all the way back to the Ancient Egyptians.  They noted that the heliacal rising of the star Sirius heralded the hottest part of the summer.  However, it isn’t exactly known why the ancient Egyptians associated this star with a dog (the star’s hieroglyph is a dog).  Sirius would appear in Egypt, after about a 70 day absence, just before the season where the Nile typically floods.  So it is thought the star’s hieroglyphic symbol being a dog symbolized a “watchdog”.

On the other hand, it’s very possible it was for the same reason the Ancient Greeks and Ancient Romans would also eventually associate this star with a dog.  Namely, that it is the brightest star in what is now known as the Canis Major (Latin for “Greater Dog” or “Big Dog”) constellation.  This constellation simply looks a little bit like a dog and Sirius is the brightest star in the constellation, so the star got named the “Dog Star” and it’s heliacal rising marked the start of the hottest part of the year, which then became the “Dog Days”.

The Roman’s expression for Dog Days was diēs caniculārēs (Latin for “Dog Days”).  The Greeks also had a similar expression that literally translated to “Dog Days”.  They both believed that, when Sirius rose around the same time as the Sun, this contributed to that time of year becoming hotter.  As such, they would often make sacrifices to Sirius, including sacrificing dogs, to appease Sirius with the hope that this would result in a mild summer and would protect their crops from scorching.