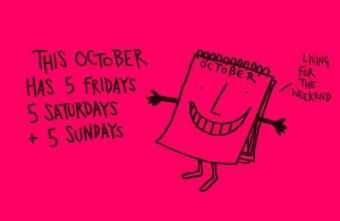 Myth: It has been 823 years since the last time October had 5 Fridays/Saturdays/Sundays

You may have seen this spread about in little cartoon pictures and on twitter/facebook/etc. In fact, it’s actually not rare at all for this to happen (last time it happened was 2004). It actually happens in the following pattern for months containing 31 days, not just October; every: 6 years, then 5 years, then 6 years, then 11 years then repeat. (the non-uniform pattern is due to leap years.) We are currently finishing that third “6 year”, so the last time was 2004, then 1999 (five years), then 1993 (6 years), so the next one will be in 2021.

What’s even more strange about this recently popularly spread myth is that, if you go back 823 years from today (1187), that October didn’t have 5 Fridays/Saturdays/Sundays either. The closest years to that date where October had five Fridays/Saturdays/Sundays are 1182 and 1193. So, apparently, the instigators of this myth probably were doing it just to see if it would catch on and, fortunately for them, few people bother questioning things they learn, particularly little quick “facts”; this includes news organizations, such as CNBC, where bestselling author, financial adviser, motivational speaker, producer, and CNBC TV show host Suzy Orman herself helped spread this myth.