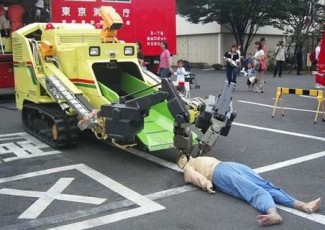 Today I found out the first known robot was created around 400-350 BC by the mathematician Archytas and was an artificial bird.

Archytas, who is known as the “father of mechanical engineering,” constructed his bird out of wood and used steam to power the movements of the robot.  This bird was then suspended from a pivot bar. In its best recorded run, it “flew” about 200 meters before running out of steam.  This is not only the first known robot, but was also one of the first recorded instances of a scientist doing research on how birds fly.

If you’re not familiar with the man, Archytas was a very famous philosopher, mathematician, astronomer, commander, statesman, and strategist in his day.  Among his many accomplishments include being named the “founder” of mathematical mechanics (what we now call mechanical engineering).  He was also an elected General for seven consecutive years, which violated the law at the time.  However, because he never lost a single battle in his time as “strategos,” the people decided to continue to elect him as the ruler of their city-state anyway.

His mathematical works also heavily influenced Plato and Euclid, among others.  Among his mathematical accomplishments were: in geometry, he solved the problem of “doubling the cube,” as proposed by Hippocrates of Chios.  He also made great advancements in musical theory, using mathematics to define intervals of pitch in the enharmonic scale in addition to those already known in the chromatic and diatonic scales.  In addition to this, he showed that pitch on a stringed instrument is related to vibrating air.

Archytas’s virtue was also such that it is thought that Plato, a close friend, used Archytas as his model for the “Philosopher King.”  He also seems to have strongly influenced Plato’s political philosophy as shown in “The Republic” and other works.  For example, “How does a society obtain good rulers like Archytas, instead of bad ones like Dionysus II?”