Microwaves Don’t Cook From the Inside Out 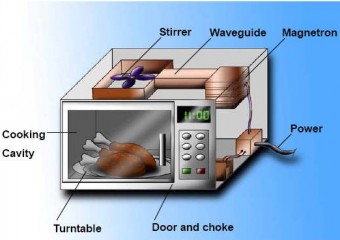 Myth: Microwaves cook from the inside out.

Microwave ovens do not “cook from the inside out”, as many people say. Microwaves actually heat from the outside in, very similar to other heating methods.

Microwaves are actually pretty simple devices. The core components needed for a microwave are simply a magnetron and a high voltage source. If you want to make it a little safer to use, you also add in a metal box with a waveguide (basically just a metal tube) that the magnetron is directing short radio waves, called microwaves, through into the metal box. These microwaves then bounce around in the metal box; when they encounter certain substances, like water, fats, sugars, ceramics, certain polymers, etc, these microwaves, via dielectric loss, heat up these molecules in a relatively efficient manner.

Specifically, with dielectric heating, molecules that are electric dipoles, having a positive and negative charge on opposite ends, will rapidly rotate themselves trying to align with the alternating electric field from the microwaves, thus heating the molecules. This requirement for rotation is why completely frozen foods tend to heat very slowly at first in a microwave, because the molecules aren’t free to rotate. So at first, the microwaves are mainly heating the molecules that can rotate. These free molecules heat up rapidly and, by convection, thaw out some of the frozen molecules, which then get heated simultaneously by convection and the microwaves. This continues until the whole thing is cooked.

As you can see from this, it would be impossible for these microwaves to somehow be emitted from the magnetron and be able to reach the center of the food substance without first going through the outer portions of the food.

The misconception arises from the fact that some foods that you microwave have a very dry outer cover (such as a crust), which the microwaves penetrate with very little absorption. Thus, the liquid inside will appear to heat up first. This is one of the reasons, with frozen food, the center might remain frozen and the outer layer somewhat cool, while the layer just under the crust may be super hot. If it was truly cooking from the inside out, as many people say, you’d never end up with that frozen center while the rest was hot enough to scald.