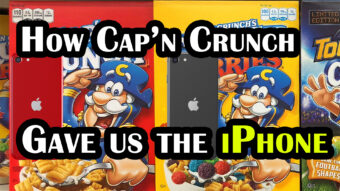 Anyone who has seen Mad Men knows that the 1960s in America were a time of unmitigated consumerism. Advertising was largely unregulated—a fact that continues to influence certain industries. Nowhere is this more apparent than in the cereal aisle. Several mainstays of the canonically fuzzy cereal multiverse have their origins in the Wild West period of children’s marketing: Lucky the Leprechaun, Toucan Sam, and, of course, the infamous, mouth-mutilating Cap’n Crunch. While he may seem like any other innocent mascot, Cap’n Horatio Magellan Crunch is a man of mystery and intrigue. He has been subject to U.S. naval investigation, helped give the world the iPhone, and his dog may be implicated for manslaughter.

Interestingly enough, Cap’n Crunch was also around before the cereal that bears his name was even finished, with flavorist Pamela Low still working on the product while Quaker Oats was already done with the marketing side. As to that flavor, Low, who by the way was also involved with the development of Almond Joy and Mounds, as well as the Heath bar, states she was attempting to come up with that ineffable quality known as “want more-ishness” with this particular product. Towards this end, she tried to mimic something close to a brown sugar, butter and rice concoction her grandmother used to make her as a child. Once she had the flavor nailed, the product was launched and the world got the Cap’n, and really sore gums.

As for the Cap’n, one might assume that a great deal of research went into designing the saccharine sailor’s uniform, but they would be incorrect. The U.S. Navy follows a strict code defining how uniforms are to reflect rank. The most readily apparent way for the general public to identify a captain would be the number of stripes displayed on an individual’s sleeve. Per regulation, captains wear four stripes, commanders three, lieutenants two, and ensigns one, with additional thinner stripes for grades between. This is where the question of Mr. Crunch’s proper rank becomes uncertain. Over the years, he has variously appeared with anywhere from one to three stripes. Even when apparently serving as Ensign Crunch, however, he has continued to erroneously make use of the title Cap’n.

The idea that the S.S. Guppy may be helmed by a spokescharacter of fabricated credentials caused enough of an uproar among the fan base that the question was posed to the United States Navy. In a 2013 article in Foreign Policy, Lt. Cmdr. Sarah Flaherty explained that “our personnel records do not show a ‘Cap’n Crunch’ who currently serves or has served in the Navy.” More ominously, Lt. Cmdr. Chris Servello told the Wall Street Journal that, “We have notified NCIS.”

Such flagrant disregard for regulations would carry serious implications. There are different laws for civilians and military personnel, so the outcome would depend on whether or not Mr. Crunch is actually employed as a member of the armed forces, which might be the case if he were, say, operating under a pseudonym. According to Article 106 of the Uniform Code of Military Justice, disciplinary action for impersonating an officer can include court martial, fines, and imprisonment. For civilians, the issue is a bit soggier.

A number of laws have been written (and rewritten) in an attempt to clarify what comprises a criminal act of impersonation. One of the most recent is the 2013 Stolen Valor Act, which targets those attempting to gain tangible benefits through falsely claiming certain honors. Unfortunately for anyone eager to prosecute Mr. Crunch, that law is written around a list of medals and other specific recognitions (such as the Medal of Honor), none of which have appeared on the milky mariner’s outfit. At most, Cap’n Crunch might be tried under 18 U.S. Code § 912, which would see him serving at least three years in prison. Alternatively, his outfit’s general resemblance to that of high-ranking naval officers could be argued under 10 U.S. Code § 771, which makes it illegal to wear “a uniform any part of which is similar to a distinctive part of the uniform of the Army, Navy, Air Force, or Marine Corps.”

The Cap’n and Quaker both responded to the public outcry by noting that he does not claim to be a “captain,” but rather a “Cap’n.” The company then made the argument that “We don’t feel [the fourth stripe is] necessary—the Cap’n is after all a Cap’n, as he mans the S.S. Guppy… And it’s the crunch, not the clothes, that make the man!”

As to that uniform, it very closely resembles the uniform worn by George Dewey- the only person in U.S. history to attain the rank of Admiral of the Navy. That same interest in maritime history is perhaps why Cap’n Crunch’s arch nemesis is a pirate named Jean LaFoote, based on a real-life Frenchman named Jean Lafitte, who among other things in his life was a smuggler, spy, pirate, and, interestingly enough, critical to the U.S.’ success in the war of 1812, when he used his not so little smuggling fleet to aid Andrew Jackson and co. during the Battle of New Orleans. The price for that help was full pardons for himself and his men, though he would later continue his nefarious ways with great success anyway.

In any event, shortly after the inception of Cap’n Crunch, audiences were introduced to his canine first mate, Sea Dog, and a crew of children who ostensibly serve aboard the S.S. Guppy in a labor arrangement that is, at best, questionable. Team Crunch was forever at odds with the villainous Jean LaFoote who was forever trying to steal the Guppy’s store of Cap’n Crunch. The sugary breakfast treat, that is, not the Cap’n himself—LaFoote expressed little interest in kidnapping. The barefoot brigand would eventually receive his own line of cereal in 1973 called Cinnamon Crunch.

Things changed dramatically for the pirate in June 25th, 2012, when LaFoote live tweeted a caper that went horribly awry. The buccaneer somehow managed to take control of the S.S. Guppy only to realize that he did not know how to steer the ship. Sea Dog then took hold of his leg. Six minutes later, fearing for his life and already apparently injured by the dog’s attack, LaFoote tweeted that he was going to jump overboard. As of 2020- a full eight years later- this is still the last tweet sent by LaFoote and it remains unclear whether or not the swashbuckler still lives.

Curiously, Jean LaFoote was not the only pirate to stem from Cap’n Crunch’s legacy, and two others who took up the mantle are now household names the world over.

As to those others, for much of breakfast cereal history it was common to find a prize inside certain boxes in order to appeal to children, not unlike why McDonald’s includes toys in their happy meals- kids will come for the cheap toy, regardless of whether they actually liked the food product. One such prize was offered by Cap’n Crunch in the 1960s: a seemingly innocuous whistle. Styled after naval bo’sun whistles used to transmit orders on a sea vessel, the plastic instrument happened to be able to produce a tone at exactly 2600 hertz. This is important because AT&T phone systems functioned on a series of tones that indicated which line was to perform a given action. Producing the right tone at the right time gave one control over part of the system, such as the ability to make free long-distance calls.

The culture that grew around learning to manipulate this infrastructure became known as “phreaking.” One of the most important phreakers was John Draper, who was not coincidentally aliased “Captain Crunch”, thanks to the aforementioned whistle. Moving beyond whistles and instruments, Draper, along with several others, ultimately constructed what came to be known as “blue boxes”- devices capable of emitting the various tones necessary to take advantage of AT&T phone lines in various ways.

Phreaking was arguably the beginning of what would later develop into the computer hacking subculture. Among the members of this burgeoning group were two young men who were inspired by John “Cap’n Crunch” Draper, sought him out, and learned his whistling ways. Of course, these two took it a step further when one of them realized that they could monetize the concept.

Their names were, of course, Steve Wozniak and Steve Jobs, who created their first business together making these blue boxes, which were incredibly valuable not just for prank and free calls, but also to criminals the world over thanks to the fact that the free calls could be made in such a way as to be incredibly difficult to trace.

As Jobs explained, you could use the device to call “from a payphone and go to White Plains, New York, take a satellite to Europe, take a cable to Turkey, come back to L.A…. You can go around the world 3 or 4 times and call the payphone next door and shout in the phone and it would be about 30 seconds and it would come out the other phone.”

As to their initial exposure, Jobs explained in a 1995 interview,

“We were so fascinated by them (blue boxes) that Woz and I figured out how to build one. We built the best one in the world; the first digital blue box in the world.  We would give them to our friends and use them ourselves.  And you know, you rapidly run out of people you want to call.  But it was the magic that two teenagers could build this box for $100 worth of parts and control 100’s of billions of dollars of infrastructure in the entire telephone network in the whole world…

Experiences like that taught us the power of ideas.  The power of understanding that if you could build this box, you could control 100’s of billions of dollars around the world, that’s a powerful thing.“

Of course, the two stopped making the boxes after they were nearly caught by the police.  Incidentally, the aforementioned Draper wasn’t so lucky and served a five year jail sentence, though briefly worked at Apple before being given the boot as most everybody at Apple couldn’t stand Draper except, according to Wozniak, Wozniak himself.

In any event, despite giving up on the venture, Woz and Jobs reportedly made about $6000 selling the blue boxes and Wozniak claims he once was able to prank call the Pope, posing as Henry Kissinger.  The Pope unfortunately was sleeping at the time, so he wasn’t able to talk to him directly.

Summing up their first business venture, Jobs stated in the aforementioned 1995 interview, “If we wouldn’t have made blue boxes, there would have been no Apple.”

Mr. Breakfast on the Cap’n https://www.mrbreakfast.com/cereal_detail.asp?id=53

The Art of the Advertising Character https://books.google.com/books?id=FQ8pRrbJpdYC&lpg=PA17&ots=abCU95BbTL&d